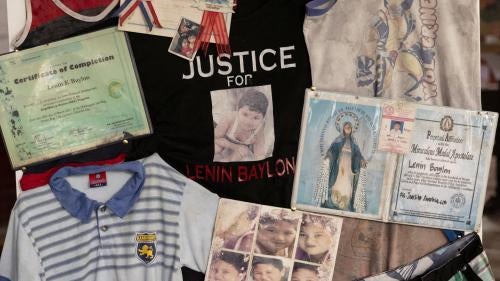 The six-year term of President Rodrigo Duterte, which ended on June 30, was defined by the politics of threats and intimidation, thousands of extrajudicial killings of mostly impoverished Filipinos from urban areas, and serious damage to the country’s democratic institutions. Since the inauguration of Ferdinand Marcos Jr. as president, the human rights situation has hardly changed.

The United Nations Office of the High Commissioner for Human Rights (OHCHR), in a September report that assessed the progress of the Philippines-UN Joint Program on Human Rights, which began in June 2021, laid out major human rights problems facing the country. Among these are the continued “harassment, threats, arrests, attacks, red-tagging against civil society actors, as well as the continued drug related killings by police.” The report also noted that “access to justice for victims of human rights violations and abuses remained very limited.”

President Marcos has sought to reassure the international community that he is committed to human rights. His officials, speaking before the United Nations Human Rights Council in October, highlighted several steps that they intended to take, while asserting that the human rights situation in the Philippines has improved. Human rights and civil society groups, however, debunked these claims with reports to the council of continuing human rights violations.

Soon after taking office on June 30, President Marcos stated he would continue the “war against drugs” initiated by his predecessor. While Marcos claimed his administration would do a “slightly different” anti-drug campaign by focusing on the rehabilitation of drug users, the unlawful use of force by the police and government agents continued. Monitoring by Dahas, a program run by the Third World Studies Center of the University of the Philippines, found that at least 90 people had been killed in what the center termed “drug-related violence” in the period since Marcos’ inauguration and September 30.

The government reported that members of the Philippine National Police and the Philippine Drug Enforcement Agency killed 6,252 individuals during anti-drug operations from July 1, 2016, to May 31, 2022. After Marcos took office, the government stopped releasing these statistics. The official death toll does not include those killed by unidentified gunmen whom Human Rights Watch and other rights monitors have credible evidence to believe operate in cooperation with local police and officials. The OHCHR calculated in a 2020 report that the death toll was at least 8,663. Domestic human rights groups and the government appointed Philippines Commission on Human Rights state that the real figure of “drug war” killings is possibly triple the number reported in the OHCHR report.

The authorities have seriously investigated very few “drug war” killings. Only a handful of cases—12 out of thousands—are in varying stages of investigation by police or active review by prosecutors. To date, there is only one case, the video-recorded murder of 17-year-old student Kian delos Santos in August 2017, which resulted in the conviction of police officers.

“Red-Tagging” and Harassment of Activists

Government and military officials accused civil society groups of being supporters of communist New People’s Army (NPA) insurgents, who have been waging a 53-year armed conflict across the Philippines. Such accusations made without evidence are part of what is commonly known in the Philippines as “red-tagging,” which put the accused at heightened risk of attack by the security forces or unidentified gunmen. The military, police, and other national security forces have actively used social media to convey “red tagging” threats, and in several cases, those red-tagged persons were subsequently killed by unknown gunmen.

The government’s National Task Force to End Local Communist Armed Conflict, which works closely with the military, police, and the president’s office, accused numerous political activists of being members of the Communist Party or the NPA. Among those red-tagged by the task force is former Vice President Leni Robredo, who lost to Marcos in the recent presidential election. The task force has also red-tagged journalists, book publishers, and international nongovernmental groups (NGOs), including Oxfam.

In September, Judge Marlo Magdoza-Malagar, a judge of the Manila Regional Trial Court who had dismissed a case that sought to declare as “terrorist groups” the Communist Party of the Philippines and its armed wing, became a target of red-tagging, prompting lawyers’ groups and even the Supreme Court to intervene. The court specifically demanded an explanation from former National Task Force spokesperson Lorraine Badoy why she should not be held in contempt.

Leaders and lawyers of peasant organizations and human rights groups who were red-tagged have been physically harmed by government security forces and vigilantes; several have been killed. Others were harassed, such as a group of nuns and peasant women who were charged with aiding “terrorist activities.” In June, Clarita Carlos, the new chairperson of the National Security Council, publicly said that she did not favor red-tagging. Despite this declaration, the practice continued.

On October 3, unidentified gunmen fatally shot Percival Mabasa, a radio commentator in Las Pinas, a city in Metro Manila. Popularly known on-air and online as Percy Lapid, he was the second journalist killed since President Marcos took office. On September 18, a man stabbed radio broadcaster Renato Blanco to death in Negros Oriental in the central Philippines. Two other journalists were murdered in 2022, according to UNESCO. Federico Gempesaw, a radio commentator, was shot dead on June 29 in Cagayan de Oro City, while Jaynard Angeles, also a radio journalist, was killed on January 12 in Tacurong City, in the southern Philippines.

Apart from these killings, the harassment of journalists also persisted in the past year. In July, the government sought to silence journalists critical of the administration by shutting down websites Bulatlat and Pinoy Weekly, two alternative press publications. The National Security Council sought to close these two outlets because of alleged links to communist insurgency, a charge the editors and journalists denied.

During the year, the government used the cyber-libel law several times against journalists, columnists, critics of the government, and ordinary social media users. In August, police arrested activist and former member of parliament Walden Bello after a staff member in the office of Vice President Sara Duterte, the daughter of the former president, made allegations against him.

The Justice Department’s Office of Cybercrime reported that 3,700 cyber-libel cases were filed as of May 2022. Of that number, 1,317 were filed in court while 1,131 were dismissed. Twelve cases ended in a conviction. Among those who have been convicted of cyber-libel is 2021 Nobel Peace Prize laureate Maria Ressa, the CEO of the news website Rappler.

Former Senator Leila de Lima, 62, one of the foremost critics of ex-President Duterte, remained in police detention since her arrest on trumped-up drug charges in 2017. De Lima faces unsubstantiated charges alleging that she received money from drug lords while serving as justice secretary. Her detention continues even though two key witnesses in the Philippine government’s case against her have retracted their testimonies. Human Rights Watch believes the Duterte administration was retaliating against her for investigating extrajudicial killings under Duterte’s anti-drug campaign.

In September, the UN high commissioner for human rights released a report that highlighted prevailing rights violations and recommended continued monitoring and reporting to the council. Nevertheless, in October, the UN Human Rights Council failed to come up with a resolution to continue the council’s scrutiny of the human rights situation in the Philippines. The UN human rights office, civil society organizations, and families of victims of abuses expressed their dire concerns about the situation in the Philippines.

The United Kingdom, Ireland, Norway, Australia, and the Netherlands have contributed to the UN-Philippines Joint Program designed to institutionalize human rights reforms in the Philippines.

In June, the prosecutor of the International Criminal Court (ICC) requested authorization from the court’s judges to resume an investigation into possible crimes against humanity committed in the context of Duterte’s “drug war.” In November 2021, the Philippine government had  requested a deferral of the ICC’s probe under the principle of complementarity, claiming that it had begun its own investigations into cases of extrajudicial killings attributed to the police during “drug war” operations. The ICC prosecutor’s office determined that the Philippine government failed to demonstrate it was taking steps to investigate several of the killings and hold perpetrators to account; it is now awaiting judicial review of its request to move forward with the investigation.

In February, the European Parliament adopted a resolution condemning the Philippine government’s abuses and urging the European Commission to set “clear, public, time-bound benchmarks” for the Philippines to comply with its human rights obligations under the EU’s GSP+ scheme, which is a condition for the country to keep its unilateral trade benefits. In March, EU officials visited the Philippines and urged “tangible and measurable progress” in that regard. Bilateral human rights discussions were again held in October.

The Philippines remains the biggest recipient of US foreign military assistance in the Asia-Pacific region, receiving a total of US$1.14 billion since 2015. In September, it was reported that the US government would be reprogramming $130 million in military aid it held back from Egypt and for new climate initiatives for Pacific Island nations, including the Philippines. US legislators have been calling for improved human rights compliance by Manila, particularly in the case of detained former Senator Leila de Lima.