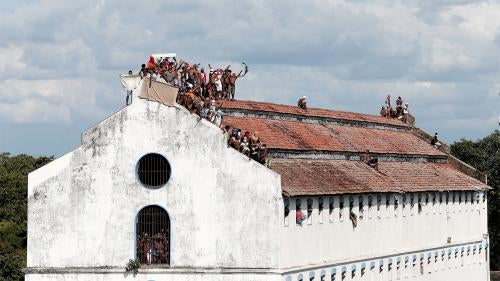 President Rajapaksa transferred responsibility for large areas of civil administration to the Ministry of Defense, including the government’s response to the Covid-19 pandemic. Following his party’s victory in parliamentary elections on August 5, the government passed a constitutional amendment that removes constraints on presidential power.

On February 26, Sri Lanka announced at the UN Human Rights Council in Geneva that it was withdrawing from its commitments to provide justice and accountability for war crimes and other grave violations committed during and since the civil war between the government and the separatist Liberation Tigers of Tamil Eelam (LTTE), which ended in 2009.

Rajapaksa, who ran on a platform of protecting “war heroes” from prosecution, was defense secretary during the administration of his brother, then-President (now Prime Minister) Mahinda Rajapaksa, when the alleged abuses took place. Several senior members of his government, including the defense secretary, Kamal Gunaratne, and army chief Gen. Shavendra Silva, were also implicated. In February, the US State Department announced that General Silva was ineligible for entry into the United States due to his alleged involvement in extrajudicial killings.

On March 26, President Rajapaksa pardoned former Sgt. Sunil Ratnayake, who had been convicted of the massacre of eight Tamil civilians, including children, at Mirusuvil in 2000. He was one of very few members of the Sri Lankan armed forces ever held accountable for human rights violations.

The families of victims, including mothers of those forcibly disappeared, called on the UN Human Rights Council to adopt a new resolution establishing an international accountability mechanism to pursue justice for abuses.

The Rajapaksa administration escalated surveillance and intimidation targeting victims’ families and human rights defenders, as well as lawyers and journalists whose work was perceived as challenging the government. Those targeted included victims and activists who engaged with the Human Rights Council.

Families of the disappeared, who have been campaigning for years to know the fate of their relatives who were last seen in security forces custody, reported heightened surveillance and threats from the intelligence services. Human rights defenders received phone calls and visits from members of the security and intelligence agencies, who demanded to know the personal details of staff and inquired into their work on accountability for past abuses.

Authorities targeted funding that human rights groups receive from abroad, alleging that such money was used to support “terrorism.” Human rights defenders reported that the banking system was preventing them from receiving international transfers. The nongovernmental organization secretariat, which regulates civil society organizations, was placed under the authority of the Ministry of Defense. The government proposed a new law to regulate foreign funding for Sri Lankan groups that raises free expression and association concerns.

On April 14, the police arrested Hejaaz Hizbullah, a lawyer who has represented victims of rights violations, under the draconian Prevention of Terrorism Act. He was held arbitrarily without charge and without being produced before a magistrate, and remained in custody. Kumaravadivel Guruparan, a lawyer representing the families of victims of enforced disappearance, was prevented from teaching law at Jaffna University following an intervention by the army. Other lawyers were also subjected to threats and arbitrary detention.

Nishantha Silva, a senior police investigator working on abuses committed under the previous Rajapaksa administration, fled the country shortly after the presidential election in November 2019. In July, the former head of the Criminal Investigation Department, Shani Abeysekera, who oversaw these cases, was arrested for allegedly concealing evidence, although a policeman testified that he had been pressured to falsely incriminate Abeysekera, who remained in detention.

Freedoms of Expression and Association

Several journalists reported receiving death threats or other intimidation, and some fled the country. Among them was Dharisha Bastians, a former editor of the Sunday Observer and contributor to the New York Times, whose laptop was seized and telephone records publicized by the government. A climate of self-censorship returned, reversing the relative openness that had prevailed under the previous administration.

On April 1, police announced that anyone “criticising” the government’s response to the Covid-19 pandemic would be arrested. UN High Commissioner for Human Rights Michelle Bachelet criticised Sri Lanka for using the pandemic to stifle freedom of expression.

On April 9, Ramzy Razeek, a retired government official, received death threats after decrying religious discrimination in a social media post. When he complained to the authorities, he was arrested and released on bail over three months later.

For several years, Muslims in Sri Lanka have been the target of virulent hate speech in mainstream and social media, which worsened following the 2019 Easter Sunday bombings by Islamist militants that killed over 250 people.  During the early months of the Covid-19 pandemic there were calls on social media to boycott Muslim businesses, and false allegations of Muslims spreading Covid-19 deliberately. After senior government figures made public comments implying—falsely—that the virus was particularly rife among Muslims, civil society organizations wrote to President Rajapaksa raising concerns that this had led to “outpourings of vitriol, and hate speech against Muslims.”

In March, the government published guidelines requiring that the remains of all Covid-19 victims be cremated, which goes against Islamic tradition and was not required for public health. Four UN special rapporteurs criticized the requirement as a violation of religious freedom.

On June 2, President Rajapaksa established a Presidential Task Force for Archaeological Heritage Management in the Eastern Province, composed of security officials and Buddhist monks, raising fears that it would disadvantage the predominant Tamil and Muslim communities. Rajapaksa said the purpose of the task force was to “preserve our Buddhist heritage.”

Same-sex relations are criminalized in Sri Lanka, and a law banning “impersonation” is used to target transgender people. Authorities use these powers to harass, detain, and extort gay, lesbian and transgender people, who also face societal discrimination.

Reflecting a global pattern, the lockdown to contain the spread of Covid-19, saw a spike in gender-based violence in Sri Lanka. Women, particularly those working in garment factories, were initially stranded during the nationwide curfews, and later returned to their homes, but suffered due to wage loss. To minimize loss of workers’ income, the Free Trade Zones and General Services Employees Union negotiated a tripartite agreement to ensure that all workers across different industries received at least 50 percent of their pay through September.

The Rajapaksa government placed over 30 agencies, including the police, under the authority of the Ministry of Defense, and retired and serving military officers were appointed to numerous key posts previously held by civilians.

On June 2, President Rajapaksa established a Presidential Task Force to build a Secure Country, Disciplined, Virtuous and Lawful Society, composed entirely of military and security officials, with loosely defined powers and the authority to issue instructions to all government officials.

A 20th amendment to the constitution, passed on October 22, gives the president sweeping new powers, including to appoint senior judges, members of the Human Rights Commission and other independent institutions, such as anti-corruption bodies, to appoint and dismiss ministers including the prime minister, and to dissolve parliament at least two and a half years after elections. Revisions to the amendment diluted some provisions, while not significantly lessening the amendment’s overall threat to human rights protections.

In her update to the UN Human Rights Council on September 14, UN High Commissioner Michelle Bachelet warned of “a very negative trend,” noted that Sri Lanka was “swiftly reneging on its commitments,” and encouraged the council to “give renewed attention to Sri Lanka, in view of the need to prevent threats to peace, reconciliation and sustainable development.”

The core group on Sri Lanka at the Human Rights Council (Canada, Germany, North Macedonia, Montenegro, and the United Kingdom) called for “an end to impunity for the violations and abuses of the past,” but has not yet shown leadership in presenting a new resolution to advance international accountability.

Sri Lanka has military and security cooperation with the United States, India, Australia, and the United Kingdom, among others. Sri Lankan trade with the European Union under the GSP+ scheme links better market access to human rights and labor standards. However, the EU, like other foreign partners, has been muted in its response to Sri Lankan rights abuses. Sri Lanka is a participant in China’s “Belt and Road” Initiative, although there are concerns about the debt burden this is creating.