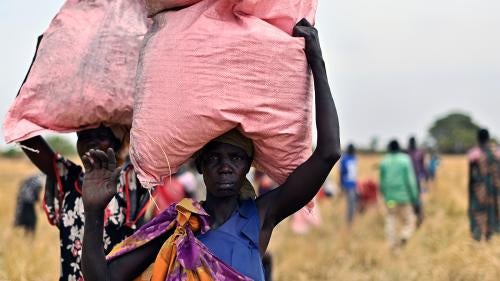 The year 2020 was marked by conflict, security forces’ violations, entrenched impunity, and a lack of respect for rule of law, all of which were enhanced by the impact of the Covid-19 pandemic.

In February 2020, the parties to the 2018 peace deal formed a transitional government of national unity led by President Salva Kiir, with Riek Machar as first vice president, and four other vice presidents from opposition groups. The parties did not implement major provisions of the peace deal including security arrangements or establishing accountability mechanisms. The requirement that at least 35 percent at all levels of governance should be women was also ignored.

The government, the Sudan People’s Liberation Movement/Army in Opposition (SPLA/IO), the National Democratic Front and non-signatory groups to the 2018 peace deal, recommitted to a ceasefire in January 2020. This ceasefire broke down in April, when fighting resumed in Yei, Lobonok, Mundri, Maridi, and other parts of the Equatoria region. Peace talks restarted in October.

Leaders from all parties to the conflict failed to prevent abuses by their forces or hold perpetrators to account, with few exceptions. Eight leaders and commanders representing both government forces and rebel groups are subject to United Nations individual sanctions for war crimes and other roles they played in the conflict.

Authorities continued to arbitrarily detain critics, including members of civil society and journalists, often holding them for extended periods without charge or trial.

The Covid-19 pandemic slowed implementation of the peace deal and the delivery of aid to populations in need. While enforcing curfews and other restrictions, security forces beat, arrested, and detained civilians.

Health care facilities were poorly staffed and ill-equipped, Covid-19 testing and access to information was inadequate. Schools were closed for six months due to Covid-19, forcing 2.2 million children out of school.

Attacks on Civilians and Aid Workers

In April and May, sporadic fighting between government army, joined by the SPLM/A-IO, and the NAS and allied groups displaced more than 19,000 people in Yei, Lainya and surrounding areas. Armed forces killed, tortured, abducted, and sexually abused civilians. In August, fighting spread to Lobonok, Mundri, Wonduruba and parts of Eastern Equatoria with similar abuses.

In June, security forces killed four civilians during a land dispute and one other person while responding to peaceful protests in Sherikat neighborhood in Juba.

Following a dispute over a government disarmament operation in August, at least 127 people including 82 civilians were killed and thousands more displaced in clashes between soldiers and armed civilians in Tonj town, Warrap state.

In August two humanitarian vehicles, including an ambulance carrying four patients, were ambushed by an unknown armed group on the Yei-Lobonok road.

In Jonglei and GPAA, attacks and counterattacks between the Lou Nuer, Gawaar Nuer, Dinka Bor and Murle communities intensified since late February. Hundreds of people were killed, injured, and abducted, and over 150,000 displaced.

In May, at least 287 people were killed during an attack by armed Murle youth groups against Lou Nuer villages in Pieri, Jonglei state.

In March, inter-clan fighting, triggered by the killing of two older men by unknown gunmen in Lakes states, killed 41 people and injured at least 60.

In May, the Ceasefire and Transitional Security Arrangements Monitoring Mechanism (CTSAMM) to the peace deal reported that government forces had raped three women and a 14-year old girl in Rubeke village, Central Equatoria during attacks on rebels on February 13. In September, CTSAMM also reported that four SPLA/IO soldiers gang-raped two girls in August in Mundri, Western Equatoria.

Between June and September, UNMISS said it had documented at least 21 cases of rape, gang-rape, forced marriage, forced nudity, sexual slavery, and attempted rape. The victims included girls as young as 10, three pregnant or lactating women, and one child with a psychosocial disability. The assaults documented were by army, community-based militias, and non-government armed groups.

A South Sudanese civil society organization reported that since Covid-19 restrictions were imposed in April, at least 1,535 girls were subjected to child marriages, pregnancies, or forced prostitution in states of Western, Eastern, and Central Equatorial.

In May, UNMISS reported on the inadequate medical response for sexual and gender- based violence survivors in South Sudan, both because of underfunding by the government to the health sector (only 1.2 percent of the budget was allocated to the public health sector) and the inability of international organizations to meet needs because of other priorities and funding shortfalls.

In June, NSS officers detained Moses Monday, director of the Organization for Non-Violence, for erecting billboards demanding financial transparency in government spending. They released him without charge after two weeks.

On May 29, NSS detained political activist Kanybil Noon, and held him without charge for 117 days, releasing him on condition that he stop criticizing the government.

On June 22, access to the Sudans Post, a local news website, was blocked by the government following the publication of an article deemed defamatory by the NSS.

South Sudan punishes “carnal knowledge against the order of nature” with up to 10 years in prison and a fine, under section 248 of its 2008 Penal Code Act. The code also criminalizes forms of gender expression by condemning “any male person who dresses or is attired in the fashion of a woman in a public place” to up to one year in prison or a fine, or both.

South Sudan made no progress establishing the Hybrid Court for South Sudan with the African Union Commission, to be staffed by South Sudanese and African judges, envisioned in the peace agreement, to try serious international crimes committed during the conflict. It has yet to sign a proposed memorandum of understanding with the AU or promulgate legislation on the court.

The Sudan People’s Liberation Army Act provides that crimes against civilians should be tried by civilian courts. Yet in September, 26 soldiers were convicted by an army court martial for crimes, including rape, looting, killings, and harassment since the outbreak of the conflict in the Yei area in 2016.

In December 2019, the NSS announced the creation of a special tribunal to try officers for crimes against the state and abuses against civilians. To date, it is known to have tried only one officer for killing a fellow officer.

In March, the UN Security Council renewed UNMISS for another year and in June the UN Human Rights Council renewed the Commission on Human Rights in South Sudan, which reported human rights abuses and impunity for widespread atrocities committed in the country’s conflict, despite the 2018 peace agreement and formation of a unity government.

In May, the UN Security Council renewed the UN arms embargo on the country and individual sanctions on eight South Sudanese nationals for their role in the conflict.

In January, the US Treasury sanctioned Vice President Deng Gai for serious human rights violations, including his role in the disappearance and reported killing of government critics Dong Samuel Luak and Aggrey Ezbon Idri who were kidnapped from Kenya in January 2017. In late December 2019, the US sanctioned five South Sudanese individuals for their role in the disappearance of the two men.

In July, local missions of the EU, France, Germany, Netherlands, Sweden, Canada and the UK, deplored the high levels of sexual and gender-based violence affecting children and women in South Sudan, and highlighted ongoing impunity for abuses.

South Sudan mediated peace talks between Sudan’s transitional government and the Sudan Revolutionary Front, a coalition of rebel groups from the western region of Darfur and the southern states of South Kordofan and Blue Nile, leading to the signing of a peace deal in Juba on August 31.

On September 4, UNMISS announced the beginning of a plan to transform its protection of civilian sites, which host at least 180,000 displaced people under the protection of UN peacekeepers, into conventional displaced persons’ camps with government police rather than UN force protection providing security, sparking fears in the camp populations of potential abuses by government forces and police.