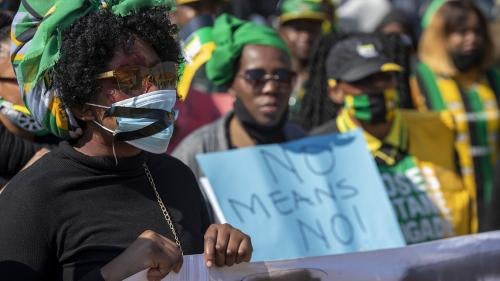 During 2020, South Africa continued to experience incidents of xenophobic violence and discrimination against non-nationals despite the government’s launch of the National Action Plan to Combat Racism, Racial Discrimination, Xenophobia and Related Intolerance (NAP) in 2019. Law enforcement officials often responded with indifference or provided inadequate remedies to xenophobic attacks. Refugees and asylum seekers faced barriers to protection. This included  a newly enacted law restricting access to asylum and a huge government backlog in processing claims and appeals. The government’s Covid-19 aid programs, including food parcels during national lockdown, overlooked people with disabilities, refugees and asylum seekers and many lesbian, gay, bisexual, and transgender (LGBT) people. President Cyril Ramaphosa appointed two special envoys to help resolve the political crisis in Zimbabwe and South Africa joined 66 other states in reaffirming support for the International Criminal Court. 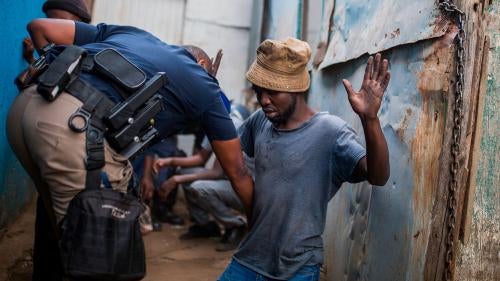 South Africa continued to be plagued by widespread incidents of xenophobic harassment and attacks against foreigners by mobs during 2020.The attacks and harassment were also committed by government and law enforcement officials. Non-nationals have also been harassed verbally and physically by South Africans for being foreign and not using local languages in their daily interactions. A common and hurtful insult thrown at foreigners is the label “kwerekwere,” a derogatory slang used by Black South Africans to mean “foreigner.”

Government and law enforcement officials throughout the country not only largely failed to ensure justice for xenophobic violence, but also operated in discriminatory and abusive ways against non-nationals. Some officials exacerbated xenophobia through inciteful rhetoric, while the South African Police Service (SAPS) and Metro Police used counterfeit goods raids as a cover to target foreign-owned shops and businesses. During the raids, police officers beat foreign shop owners and fired tear gas and rubber bullets at them.  Ransacking and destroying their shops. Victims in the Johannesburg Central Business District and Diepsloot alleged that the police then resold confiscated goods back to them.

In coordination with the Department of Home Affairs (DHA), police conducted abusive “documentation raids” in areas where many non-nationals reside, including by entering foreigners’ homes to verify documents and legal status while administering beatings.

While the 2019 National Action Plan to combat xenophobia, racism, and discrimination marked an important step toward recognizing and addressing these abuses, it has not ensured accountability for xenophobic crimes.

In June 2020, following protests against the murder of Tshegofatso Pule, a 28-year-old woman whose body was found dumped in Soweto, Johannesburg, President Ramaphosa acknowledged that South Africa had among the highest levels of intimate partner violence in the world. As much as 51 percent of South African women have experienced violence at the hands of someone with whom they were in an intimate relationship. He described violence against girls and women as South Africa's “second pandemic,” after the coronavirus, and called on residents to end the culture of silence around gender-based violence and report perpetrators to the SAPS.

In September, Ramaphosa said three bills to amend the Criminal Law (Sexual Offences and Related Matters), Criminal and Related Matters Act, and the Domestic Violence Act had been introduced in parliament to “fill the gaps that allow perpetrators of these crimes to evade justice and to give full effect to the rights of our country’s women and children.” He said that a public register of sex offenders with all relevant details would also be introduced. Civil society organizations have expressed concerns that GBV victims faced worsening violence and the inability to access help under the lockdown

South Africa continues to criminalize sex work and prohibit other aspects of sex work. This includes criminalizing running or owning a brothel, living off of the earnings of “prostitution,” and enticing a woman into “prostitution.” Criminalization has undermined sex workers’ access to justice for crimes committed against them and exposed them to unchecked abuse and exploitation by law enforcement officials, including police officers. Although the Department of Health’s National Strategic Plan on HIV for Sex Workers is grounded in respect for the human rights of sex workers, criminalization hinders sex workers’ efforts to access health care, including HIV prevention, treatment, care and support.

In October 2020, South Africa’s Department of Social Development said it has failed sex workers by not providing them with services such as counselling, safety and security and giving them other options to opt-out of sex work when they wish to do so. Deputy Minister of Social Development Hendrietta Bogopane-Zulu committed to elevating sex workers’ issues. Some government departments expressed support for the decriminalization of sex work to assist sex workers to access all government services and reduce their victimization and exposure to violence.

Due to the Covid-19 pandemic, more than 13 million children across South Africa were affected by school closures. The closures lasted about six months, exacerbating existing inequalities. Children who were already at risk of being excluded from accessing quality education have been most affected.

The South African government’s responses to the Covid-19 pandemic worsened the plight of children across South Africa in 2020. This included the closure of the National School Nutrition Programme (NSNP) without contingency plans to feed 9 million economically vulnerable children during the national lockdown.

The government also closed  schools and Early Childhood Development (ECD) centers with inadequate plans to keep children learning during lockdown. The government also neglected to ensure that learning platforms were inclusive for learners with disabilities. There has been a failure to prepare for the timeous reopening of ECDs, and a lack of provisions and resources to protect children from violence.

The case of Centre for Child Law and Others v. Minister of Basic Education and Others, decided by the High Court of South Africa in December 2019, on behalf of 37 children without birth certificates who were barred from enrolling in Eastern Cape schools, revealed that many children born in South Africa, whether to citizens or foreigners, were not given birth certificates.

The court ordered Eastern Cape public schools to accept alternative proof of identity for the 37 undocumented children and declared that the Immigration Act 13 of 2002 did not “prohibit the admission of illegal foreign children into schools.” Moreover, the minister of education was prohibited from removing or excluding already-admitted students because they lacked or could not produce specific identification documents.

As of mid-November, South Africa had 757,144 confirmed Covid-19 cases with 20,556 deaths, one of the highest figures across Africa. The government’s Covid-19 aid programs, including food parcels, overlooked refugees and asylum seekers. Many lesbian, gay, bisexual, and transgender (LGBT) African asylum seekers and undocumented migrants were also overlooked. Sex worker rights groups also noted that this vulnerable population had been left out of relief planning. The government did not sufficiently consult with people with disabilities in its Covid-19 policies, leaving many at serious risk of Covid-19 infection, hunger, and other harms.

Authorities failed to take urgent steps to facilitate support, including from donors, for refugees and asylum seekers whose access to food and other basic necessities were limited during the nationwide lockdown.  On May 12,  the rapporteur for South Africa at the African Commission on Human and Peoples’ Rights, Solomon Ayele Dersso, sent an urgent appeal to the government to protect the rights of vulnerable groups, including refugees, asylum seekers and migrants in the context of the lockdown to combat the coronavirus.

In February 2020, South Africa became the chair of the African Union (AU) for a year. In keeping with the summit theme of Silencing the Guns, President Ramaphosa, as AU chairperson, spoke in Addis Ababa of an Africa “that is prosperous and at peace with itself.” Other leaders pledged that the 55-member bloc will play a greater role in resolving protracted conflicts and will work to unlock the continent’s economic potential.

On March 24, the African Commission on Human and Peoples’ Rights in a letter to President Ramaphosa expressed concern about the vulnerability of refugees and asylum seekers under South Africa’s Covid-19 regulations. The commission urged the South African government to adequately address human rights issues in its responses to Covid-19, including ensuring that undocumented refugees and asylum seekers in South Africa have access to basic services.

In 2020, South Africa served its second year as a non-permanent member of the United Nations Security Council. On September 22, in his address to the 75th UN General Assembly, President Ramaphosa reaffirmed South Africa’s commitment to the ideals and spirit of the UN Charter and to sparing no effort to bring about a more just, peaceful and equitable world. In September, South Africa dispatched a high-level delegation to Zimbabwe to help find a solution to the country’s escalating economic and political crisis. The team, led by the secretary-general of the governing African National Congress (ANC) party, Ace Magashule, met officials from Zimbabwe’s ruling African National Union-Patriotic Front (ZANU-PF) party and raised concern about the country’s deteriorating human rights situation.

In June 2020, South Africa jointly issued a statement with 66 other member states of the International Criminal Court (ICC) reaffirming unwavering support for the court as an independent and impartial judicial institution. They said the ICC is an integral part of this order and a central institution in the fight against impunity and the pursuit of justice, which are essential components of sustainable peace, security, and reconciliation. This followed the release of the United States executive order with travel restrictions and economic sanctions, such as freezing assets of certain persons associated with the ICC.