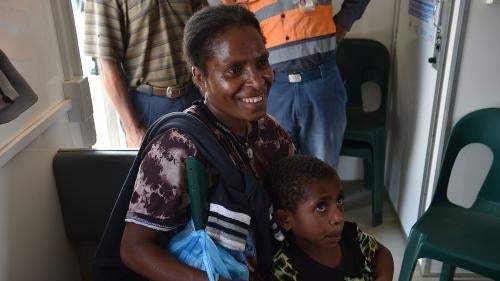 Although a resource-rich country, almost 40 percent of Papua New Guinea’s (PNG) population lives in poverty. The outbreak of Covid-19 in the country highlighted ongoing challenges with government corruption, economic mismanagement, and a fragile health care system. Lack of accountability for police violence persisted in PNG, and weak enforcement of laws criminalizing corruption and violence against women and children continue to foster a culture of impunity and lawlessness. Prime Minister James Marape committed to reforms and promised a crackdown on corruption in the country, but real progress has yet to be seen.

PNG remains one of the most dangerous places to be a woman or girl, where violence against women and children is rampant. More than two-thirds of the women in PNG are victims of domestic violence. In June alone, there were 647 cases of domestic violence reported in Port Moresby. A 2020 academic study found that over a 19-month period, a specialist police unit set up to receive complaints of sexual violence in Boroko, Port Moresby, averaged 27 complainants per month, 90 percent of whom were female, and 74 percent of whom were under age 18.

PNG has laws in place to protect women and children, including the Lukautim Pikinini (Child Welfare) Act 2015 and the Family Protection Act 2013, but they are rarely enforced. Initiatives such as Family Sexual and Violence Units within the police force remain limited, with police themselves targeting children and adults for sexual violence. Lack of services for victims requiring assistance compounds the problem.

In 2020, several instances of domestic violence sparked outrage in PNG. In June, boxer Debbie Kaoref released a video of her partner brutally beating her with an iron in front of her children. After footage of the assault was shared widely on social media, police arrested her partner and charged him with grievous bodily harm. In July, the partner of 19-year-old Jenelyn Kennedy reportedly killed her after six days of chaining her up, beating, and torturing her. Her partner has been charged with wilful murder.

Sorcery-related violence continued unabated. In November, in East Sepik province, according to the Guardian, police said five people were killed after being accused of sorcery. Police charged three people with the wilful murders of a woman, a teenage student and a 13-year-old-boy, all accused of sorcery. A man and his son were also killed that week for the same reasons.

PNG has one of the highest maternal mortality rates in the Pacific region and failure to implement measures to ensure women and girls can safely access healthcare facilities amid the Covid-19 pandemic has made pregnancy even more unsafe. Lack of Covid-19 testing equipment has resulted in hospital authorities turning pregnant women away from hospitals. Some do not feel able to seek care during pregnancy due to fear of contracting Covid-19, domestic travel shutdowns, and the economic impact of lockdowns, increasing risks to themselves and their babies.

One in 13 children die each year of preventable disease and tuberculosis is endemic. Covid-19 has put child health outcomes at risk as closures related to PNG’s pandemic response have interrupted vaccination and other health programs.

In April, schools closed down temporarily disrupting the education of 2.4 million students due to the Covid-19 pandemic, and the government, with international assistance, was still trying to return children to classes late in the year. Before the shutdown, net enrolment stood comparatively low at 74 percent in primary education and 32 percent in secondary.

In September, Police Minister Bryan Kramer acknowledged that the police force has a “rampant culture of police ill-discipline and brutality.” Kramer said the government is taking steps to reform the police force “from the top down,” without elaborating on those steps or how they would be funded.

Children continue to experience brutal beatings, rape, and torture at the hands of police and other law enforcement officials.

In January, prison officers shot and killed a prison escapee at Buimo prison in Lae during a mass break out. A corrective services officer was also killed. In August, prison officers shot and killed 11 prison escapees at Buimo prison. Corrective Services promised investigations into the deaths, but at time of writing it was unclear whether any investigation had commenced.

In May, police arrested and charged former Prime Minister Peter O’Neill with misappropriation, corruption, and abuse of office. The charges relate to the 2013 purchase of two generators from Israel for 50 million kina (US$14.1 million) while O’Neill was prime minister. The police complaint about the transaction was initially lodged by the PNG opposition in 2014. It is alleged that O’Neill directed the payments for purchase without parliament approval, without due consideration for procurement processes, and without a tender process.

At time of writing, about 145 refugees and asylum seekers remained in Papua New Guinea, transferred there by the Australian government since 2013. They are mostly in Port Moresby. Refugees and asylum seekers in PNG endure violence, threats, and harassment from locals, with little protection from authorities. The former detention center on Manus is now the site of a proposed new joint Australian-American naval base.

Medical facilities in Papua New Guinea are woefully inadequate and have proven unable to cope with the complex medical needs of asylum seekers and refugees, particularly their mental health needs.

The Guardian reported that around 30 asylum seekers, mostly Iranians, had signed agreements to “voluntarily” return to their country of origin in order to be released from the Australian-funded Bomana Immigration Centre. In January 2020, Papua New Guinea authorities released the last 18 failed asylum seekers detained in Bomana.

In September, 156 Bougainville residents petitioned the Australian government to investigate Rio Tinto’s involvement in human rights abuses after inadequate reclamation following the closure of its Panguna mine in Bougainville left people with contaminated water. Petitioners said that polluted water from the mine pit flowed into rivers polluting fields. Many villages do not have access to clean drinking water and have reported serious health impacts, including sores and skin diseases, diarrhea, respiratory problems, and pregnancy complications. Rio Tinto did not accept the claims in the complaint, but acknowledged that there were environmental and human rights considerations.

In April, PNG refused an application by joint venture partners Canadian company Barrick Gold and Chinese company Zijin Mining Group to extend their mining lease for the Porgera gold mine, with Marape citing long standing environmental and resettlement issues. In August, Marape granted a lease to a state-owned company. Barrick Gold disputes the government’s decision as a violation of the terms of its existing lease. At time of writing, Barrick Gold was appealing to the Supreme Court a lower court’s decision upholding the lease rejection and referring the decision to the World Bank’s International Centre for Settlement of Investment Disputes. In October, Marape and Barrick Gold commenced negotiations to reopen the Porgera gold mine under new partnership arrangements.

In October, 10 United Nation experts raised human rights concerns with the governments of PNG, Australia, Canada, and China about a proposed gold, copper, and silver mine to be built on the Frieda river. The mine, if approved and built, would be the largest in PNG’s history. PanAust, the majority shareholder in the project, has not responded publicly to the UN special rapporteurs’ concerns.

Despite the existence of a national disability policy, PNG has yet to pass comprehensive disability legislation. People with disabilities are often unable to participate in community life, attend school, or work because of lack of accessibility, stigma, and other barriers. Access to mental health services is limited, and many people with psychosocial disabilities and their families often consider traditional healers to be their only option. Covid-19 has disproportionately affected people with disabilities who are left out of government Covid-19 policies and communications.

Same-sex relations are punishable by up to 14 years’ imprisonment in PNG’s criminal code. In May, on the International Day Against Homophobia, Biphobia, Interphobia and Transphobia, Australia’s high commissioner to PNG, Jon Philp, faced a backlash after his Facebook post called for an end to homophobia in the country.

As of October 25, there were 588 confirmed cases of Covid-19 in PNG and seven deaths reported. PNG officials have said that they have limited capacity to test people, raising concerns that the actual number of cases is higher.

The fragile health system in PNG is underfunded and overwhelmed, with high rates of malaria, tuberculosis, and diabetes among its population of more than 8 million. Access to hospitals is extremely limited, with 80 percent of the population living outside urban centers.

In March, the Ministry of Health reported on Covid-19 preparedness detailing chronic deficiencies, as well as inadequate training on use of personal protective equipment and infection prevention and control. In March, PNG declared a state of emergency and a national lockdown, and some doctors told the Guardian they were forbidden from speaking with media under state of emergency powers. Nurses across the country threatened to strike over the lack of basic medical supplies. Police Commissioner David Manning warned anyone spreading “false” or “unsanctioned” information during the state of emergency would be prosecuted.

In June, the state of emergency was replaced by the National Pandemic Act 2020, raising concerns about the lack of parliamentary oversight over the operations of government and key emergency personnel. The opposition is challenging the law in the Supreme Court.

In December 2019, the autonomous region of Bougainville voted overwhelmingly in favor of independence from PNG. The referendum is non-binding, but Marape has acknowledged the wish of Bougainvilleans to separate.