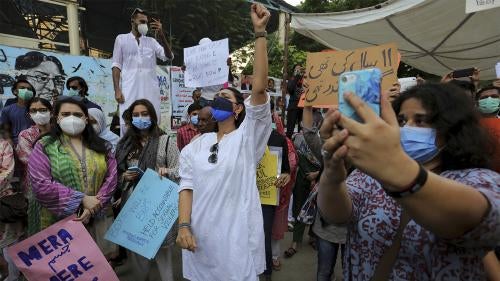 In 2020, the Pakistan government harassed and at times prosecuted human rights defenders, lawyers, and journalists for criticizing government officials and policies.

A climate of fear continues to impede media coverage of abuses by both government security forces and militant groups. Journalists who face threats and attacks have increasingly resorted to self-censorship. Media outlets have come under pressure from authorities not to criticize government institutions or the judiciary. In several cases in 2020, government regulatory agencies blocked cable operators and television channels that had aired critical programs.

In late September, the Federal Investigation Agency (FIA) began investigating at least 12 journalists and activists for violations of the Electronic Crimes Act. Journalists also faced charges for statements made on social media. On September 11, Bilal Farooqi, a news editor at the Express Tribune, was arrested on charges of sedition and detained in Karachi for several hours before being released on bail. On September 9, Absar Alam, a senior journalist in Jhelum, Punjab province, was charged with sedition and “high treason” for using “derogatory language” about the government on social media. On September 15, Asad Ali Toor, a journalist at Samaa television in Rawalpindi, was charged with sedition for comments made on Twitter.

Government officials continued to use the National Accountability Bureau (NAB), an anti-corruption agency, to target critics. On March 12, NAB agents in Lahore arrested Mir Shakil-ur-Rehman, editor-in-chief of the Jang group, the largest media group in Pakistan, on charges relating to a 34-year-old property transaction. He has remained detained ever since.

In July, the Pakistan Electronic Media Regulatory Authority (PEMRA) ordered 24NewsHD, a television news channel, off the air indefinitely for the alleged “illegal transmission of news and current affairs content.” Journalists and opposition activists claimed that it was being punished for airing criticism of the government. On July 21, journalist Matiullah Jan was abducted by unidentified assailants in Islamabad the day before he was to appear before the Supreme Court for allegedly “using derogatory/contemptuous language and maligning the institution of judiciary.” Jan was released after a few hours. He claimed the abduction was an attempt to intimidate him.

In August, a group of leading women journalists issued a statement condemning a “well-defined and coordinated campaign” of social media attacks, including death and rape threats against women journalists and commentators whose reporting has been critical of the government.

Nongovernmental organizations (NGOs) reported intimidation, harassment, and surveillance of various by government authorities. The government used the “Regulation of INGOs in Pakistan” policy to impede the registration and functioning of international humanitarian and human rights groups.

The Pakistani government did not amend or repeal blasphemy law provisions that have provided a pretext for violence against religious minorities and have left them vulnerable to arbitrary arrest and prosecution. The death penalty is mandatory for blasphemy, and 40 people remained on death row as of late 2020. In September, Asif Pervaiz, a Christian man accused of sending a blasphemous text, was sentenced to death by a Lahore trial court.

In July, Tahir Naseem Ahmad, an Ahmadi man charged with blasphemy and imprisoned in 2018, was fatally shot by an assailant who smuggled a gun inside a high-security courtroom in Peshawar. Although the assailant was arrested, no government officials condemned the attack.

Members of the Ahmadiyya religious community continue to be a major target for prosecutions under blasphemy laws, as well as specific anti-Ahmadi laws. Militant groups and the Islamist political party Tehreek-e-Labbaik (TLP) accuse Ahmadis of “posing as Muslims.” The Pakistan penal code also treats “posing as Muslims” as a criminal offense. In May, the government excluded Ahmadis from being part of a National Commission for Minorities, a new commission tasked with safeguarding the rights of the country’s minorities.

Abuses against Women and Girls

Violence against women and girls—including rape, murder, acid attacks, domestic violence, and forced marriage—remains a serious problem throughout Pakistan. Human rights defenders estimate that roughly 1,000 women are killed in so-called honor killings every year. Data from domestic violence helplines across Pakistan indicated that cases of domestic violence increased 200 percent from January-March 2020, and further worsened during the Covid-19 lockdowns after March.

In September, nationwide protests took place to demand police reform after the Lahore Police chief made a public statement suggesting that a woman who had been gang-raped on a highway in Punjab was herself at fault because she should not have been traveling “without her husband’s permission” on a motorway late at night.

In August, a Human Rights Ministry report found that women in prison receive inadequate medical care and live in poor conditions. According to the report, Pakistan’s prison laws did not meet international standards and officials routinely ignored laws meant to protect women prisoners. The report also found that children who accompany their mothers in prison face additional risks of poor nutrition and lack of education.

Even before the Covid-19 pandemic, over 5 million primary school-age children in Pakistan were out of school, most of them girls. Human Rights Watch research found girls miss school for reasons including lack of schools, costs associated with studying, child marriage, harmful child labor, and gender discrimination. School closures to protect against the spread of Covid-19 affected almost 45 million students; Pakistan’s poor internet connectivity hampered online learning.

In September, the government released a judicial commission report on the 2014 Army Public School attack in Peshawar in which 145 people, mostly children, were killed. The report accused the school’s administration of serious security lapses. Pakistan has yet to endorse the Safe Schools Declaration.

Attacks on the Political Opposition

In late September, the government intensified its crackdown on opposition leaders following the formation of an opposition alliance. On September 29, Shahbaz Sharif, a senior opposition leader, was arrested in Lahore and former President Asif Ali Zardari indicted in Islamabad, both on politically motivated money laundering charges. On October 5, former Prime Minister Nawaz Sharif was charged with sedition.

The National Accountability Bureau, Pakistan’s anti-corruption agency, continued to intimidate, harass, and detain political opponents and critics of the government. In February, the European Commission criticized the NAB for political bias, noting that “very few cases of the ruling party ministers and politicians have been pursued since the 2018 elections, which is considered to be a reflection of NAB's partiality.” In July, Pakistan’s Supreme Court ruled that the NAB had violated the rights to fair trial and due process in the arrest of two opposition politicians, Khawaja Saad Rafique and Khawaja Salman Rafique, whom the NAB detained for 15 months without credible charge.

In February, the Supreme Court Bar Association and the Pakistan Bar Council, the top elected bodies of lawyers in the country, condemned the summons issued to an opposition leader, Bilawal Bhutto, calling it an “act of political victimization.”

The Tehrik-Taliban Pakistan (TTP), Al-Qaeda, and their affiliates carried out suicide bombings and other indiscriminate attacks against security personnel that caused hundreds of civilian deaths and injuries during the year. At least 109 people were killed in 67 attacks between January and July, twice the number in 2019, according to the FATA Research Centre. Balochistan Liberation Army (BLA) militants targeted security personnel and civilians. In June, four BLA gunmen attacked the Pakistani stock exchange in Karachi killing two guards and a policeman and wounding seven others.

Pakistani law enforcement agencies were responsible for human rights violations, including detention without charge and extrajudicial killings. Pakistan failed to enact a law criminalizing torture despite Pakistan’s obligation to do so under the Convention against Torture.

Pakistan has more than 4,600  prisoners on death row, one of the world’s largest populations facing execution. At least 511 individuals have been executed since Pakistan lifted the moratorium on death penalty in December 2014. Those on death row are often from the most marginalized sections of society.

Pakistan’s penal code continued to criminalize same-sex sexual conduct, placing men who have sex with men and transgender people at risk of police abuse, and other violence and discrimination. According to local human rights groups, at least 65 transgender women have been killed in Khyber Pakhtunkhwa province since 2015. In April, Musa, a 15-year-old transgender boy was gang-raped and killed in Faisalabad district, Punjab. In July, unidentified gunman in Rawalpindi district, Punjab, killed Kangna, a transgender woman. An unidentified assailant fatally shot Gul Panra, a transgender woman activist in Peshawar, in September. The murder prompted widespread condemnation on social media.

As Karachi, Pakistan’s largest city, went into a Covid-19 lockdown in March, its commissioner, Iftikhar Shalwani, promised to ensure that the transgender community received health care and other social services without discrimination.

Pakistan had at least 300,000 confirmed cases of Covid-19, with at least 6,400 deaths at time of writing. With little testing available, the numbers were likely much higher. From March through August, the federal and provincial governments announced partial or complete lockdowns. However, despite rising infection numbers, the Supreme Court justified reopening shopping malls in May, claiming that Pakistan was not “seriously affected” by Covid-19.

According to Pakistan Workers’ Federation, in March at least half-a-million textile and garment industry workers were dismissed in Punjab province alone. These economic shutdowns had a disproportionate effect on women, especially home-based workers and domestic workers. The Sindh provincial government issued directives prohibiting employers from laying off workers during the lockdown period, ensuring payment of salaries, and establishing an emergency fund to address the negative economic consequences of Covid-19. The Sindh government also set up a tripartite mechanism with representatives of employers, workers, and government to deal with salary complaints. The federal and Punjab governments disbursed payments to workers who lost jobs, but at significantly lower rates than the minimum wage in any province.

The risk of contagion was particularly serious in Pakistani prisons, which are severely overcrowded. Pakistani authorities took some steps to mitigate the impact of the infection in the prison population. In March, the Sindh provincial government began screening  inmates and prison staff for Covid-19. The Sindh and Khyber-Pakhtunkhwa government implemented a policy of early releases for many prisoners.

Pakistan’s volatile relationship with United States, the country’s largest development and military donor, showed signs of improvement in 2020. The US acknowledged Pakistan’s significant role as one of the stakeholders facilitating the intra-Afghan dialogue. In August, US Secretary of State Mike Pompeo said that US looked forward to strengthening US-Pakistan ties by “expanding US-Pakistan trade and working together to protect fundamental freedoms.” In September, US Ambassador-designate William Todd, in his testimony before the Senate Committee on Foreign Relations, said that his “first goal will be advancing human rights, particularly freedom of religion and expression.”

Pakistan is a beneficiary of the European Union’s GSP+ scheme, which grants preferential access to the EU market conditional to the ratification and implementation of several human rights treaties. In its February 2020 biennial report, the EU noted lack of progress on enforced disappearances, labor rights, and torture, as well as shrinking space for civil society and growing repression of dissent.

Pakistan and China deepened extensive economic and political ties in 2019, and work continued on the China-Pakistan Economic Corridor, a project consisting of construction of roads, railways, and energy pipelines. In June, the government held talks with Chinese energy companies in an effort to renegotiate its debt, which it said was based on inflated costs. Pakistan continued to maintain its silence on the ongoing repression of ethnic Uyghurs and other Turkic Muslims in Xinjiang.

Historically tense relations between Pakistan and India deteriorated further. Following the Indian government’s September 2019 decision to revoke the constitutional autonomy of Jammu and Kashmir state, Pakistan downgraded its diplomatic relations, expelled the Indian high commissioner , and in 2020 continued to seek international intervention on Kashmir with the United Nations, the EU, and the Organisation of Islamic Cooperation.