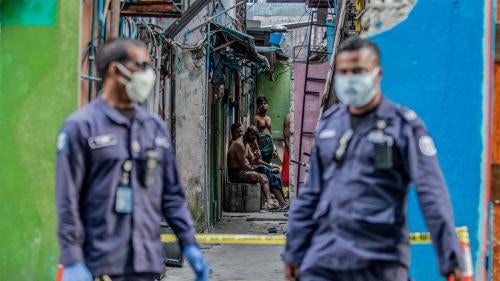 Upon taking office in 2018, President Ibrahim Mohamed Solih vowed to restore the fundamental rights eroded by longstanding authoritarian rule. However, his administration has failed to confront deep-rooted corruption and the continuing influence of extremist Islamist groups, including in the government, police, and courts.

The economic and social impact of the Covid-19 pandemic has compounded threats to vulnerable groups, particularly migrant workers. The government failed to curb threats of violence and investigate extremist Islamist groups for targeting social justice activists. Online intimidation of human rights groups continued to have a chilling effect on civil society in 2020.

Despite facing grave threats from climate change, the Maldives authorities have not adequately consulted local communities or implemented sufficient measures to mitigate or adapt to the growing risk of floods, erosion, and other natural disasters.

The government took action to address some issues facing migrant workers, including regularizing undocumented migrants and advancing the National Taskforce on Issues related to Migrant Workers.

Heavily dependent on tourism, the Maldives economy was badly hit by the Covid-19 pandemic. The ensuing socioeconomic crisis exacerbated existing inequalities and abuses, disproportionately affecting the livelihoods and wellbeing of migrant workers and women.

Covid-19 also underscored weaknesses in the government’s capacity to provide essential needs and services. The emergency procurement of healthcare supplies and equipment raised concerns about corruption. In August, a government audit called for an investigation into “significant irregularities” it found in the Ministry of Health’s procurement of ventilators.

Schools were closed down for three months during the pandemic, with no formal learning provided to 91,000 children.

The Maldives has the largest proportion of foreign migrant laborers in South Asia, roughly one-third of the resident population, at least 60,000 of whom are undocumented. The vast majority work in the construction and tourism industries.

Authorities cracked down on foreign workers protesting the wage abuses that had escalated during the pandemic. In July alone, police detained more than 80 migrants during protests. More than 8,000 were deported from July to September, some without receiving their owed wages.

Covid-19 also spotlighted longstanding abuses, including wage theft, passport confiscation, and unsafe living and working conditions. Agents use deceptive or fraudulent practices to recruit migrants to work in the Maldives, leaving them at risk of debt-based coercion and trafficking.

The Maldives, not a party to the 1951 Refugee Convention, lacks an asylum system and refugee protection mechanism, leaving people who fear persecution in their home countries with no opportunity to seek protection.

The government has failed to implement adequate measures to identify and support trafficking victims or investigate and prosecute abusers.

The Solih administration has not effectively confronted threats to activists and civil society organizations, instead often capitulating to the demands of extremist Islamist groups. In December 2019, the government arbitrarily dissolved the Maldivian Democracy Network (MDN), the country’s leading human rights organization, following claims that the group had insulted Islam in a 2016 report. The police investigated the authors of the report for alleged blasphemy. In January 2020, the government seized MDN’s funds after freezing its bank accounts without notice.

In June, extremist groups initiated a social media campaign demanding that the government ban the women’s rights organization Uthema for being anti-Islam after the group published a report on the government’s adherence to its obligations under the Convention on the Elimination of All Forms of Discrimination against Women (CEDAW).

In March, the government established a Whistleblower Protection Unit to investigate allegations of corruption, human rights violations, obstruction of justice, and serious environmental harm, and to provide protection to whistleblowers.

In July, in response to various protests held across the country, the Home Affairs Ministry invoked a dormant 2016 law prohibiting street demonstrations except in one closed-off location in the capital, Malé, and only after obtaining prior police approval.

A government-appointed commission investigating deaths and enforced disappearances found that groups affiliated with Al-Qaeda were responsible for the murder of several prominent activists and politicians, including journalist Ahmed Rilwan in 2014 and blogger Yameen Rasheed in 2017. The commission also recommended that the police charge former Vice President Ahmed Adeeb for intervening to release two suspects. After accusing the justice system of shielding suspects from prosecution, the commission announced in June that it was unable to proceed further with its investigations. No convictions have been made.

The Maldives is ranked 130 out of 180 countries in Transparency International’s Corruption Perceptions Index, and holds the lowest score in the financial secrecy index owing to a lack of transparency and weak regulation.

A transitional justice bill has been submitted to parliament, but no justice mechanism for investigating past incidence of torture and other abuses is in place.

The Maldives is one of the most vulnerable countries to increased environmental impacts from climate change, yet the Solih government has failed to adequately enforce environmental protection laws governing development projects. Developers routinely gain approval for projects without adherence to environmental regulations or carrying out approved mitigation measures, causing long-term harm to communities from increased flooding, loss of livelihoods, and destruction of vital ecosystems.

The government has yet to fulfill its pledge to give the Environmental Protection Agency (EPA) increased independence. Environmental impact assessments for new projects often lack independence and genuine consultations with communities. Proposed mitigation measures are rarely implemented. In May, the EPA approved a dredging and land reclamation project in Gulhifalhu despite ongoing concerns of local citizen-led campaigns about potential irreversible environmental harms, and resulting loss of livelihood to communities. Despite a parliamentary inquiry into the potential damage and an anti-corruption investigation into irregularities in the awarding of the project, the reclamation went ahead.

Government ministers have bypassed environmental impact assessment requirements in pursuit of infrastructure projects. In January, the environment minister approved a project to expand the Maafaru airport, overriding the EPA, which had rejected the project because of erosion risks and harm to coral reefs.

In February, the parliament passed a resolution declaring a climate emergency, underscoring the devastating impacts that climate change will likely have in the Maldives.

While hundreds of complaints of torture and ill-treatment have been filed with government commissions since the Anti-Torture Act was passed in 2013, none have led to the prosecution of officials or redress for victims. Cases of police violence are regularly dismissed for alleged lack of evidence. Following a visit to the Maldives in November 2019, the UN special rapporteur on torture found that this widespread impunity has caused a “profound erosion of public confidence in the integrity and reliability of the police and the judiciary.”

Despite government promises in 2019 to address mistreatment in prisons, conditions remained deplorable, with extreme overcrowding, some at almost double capacity. Prisoner releases in response to Covid-19 were minimal. In late August, 11 detainees in Hulhumalé prison tested positive, five of whom were foreign workers being held for deportation.

In August, Yasir Yahya, a Yemeni national who was detained in 2017, died after undertaking a hunger strike while in custody in the immigration detention center in Hulhumalé. Yahya was detained for alleged ties to terrorist groups, but was never formally charged during his three years in detention.

Gender-based violence is endemic in the Maldives. Rising Islamist extremism has led to increased harassment and attacks against women on social media and in public, much of which goes unreported due to the overlying violence and threats. Marginalized women and girls are disproportionately targeted for penalties under Islamic law.

The nongovernmental organization Uthema reported that most victims of domestic violence decline to press charges, while complaints are withdrawn in almost 70 percent of cases. The United Nations noted reports of increased domestic violence during the Maldives’ Covid-19 lockdown, while government support services remained under-resourced and understaffed.

The Maldivian penal code criminalizes adult, consensual same-sex sexual conduct; punishment can include imprisonment of up to eight years and 100 lashes, and applies equally to men and women. Same-sex marriage is outlawed and punishable by up to a year in prison. Extremist groups in the Maldives use social media to harass and threaten those who promote the rights of lesbian, gay, bisexual, and transgender (LGBT) people.

President Solih has criticized the scale of Chinese-government debt incurred by the previous administration, but the countries remain closely linked. Chinese loans account for about 45 percent of the national debt. At the same time, the Maldives government continued its pivot toward India over the course of 2020. As part of its effort to counter Chinese influence, India pledged US$500 million to fund what will be the Maldives’ largest infrastructure project.

In September, the Maldives signed a defense agreement with the United States to strengthen engagement “in support of maintaining peace and security in the Indian Ocean,” with India’s support. During an October visit, the US secretary of state announced the US would establish an embassy and resident ambassador in the Maldives for the first time.