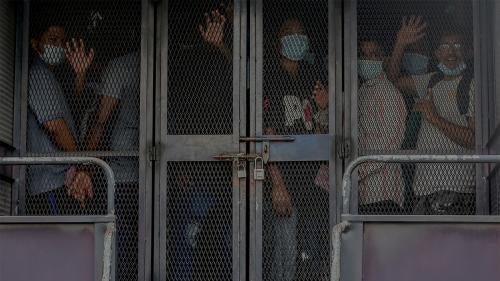 Malaysia’s faltering reform movement was halted in March when the Pakatan Harapan coalition collapsed and was replaced by a new coalition comprised of the United Malays National Organization (UMNO), the Malaysian Islamic Parti (PAS), and defectors from the Pakatan Harapan coalition. The new government, headed by Prime Minister Muhyiddin Yassin, aggressively cracked down on critical speech and protest, backed away from creating a truly independent police complaints commission, and took a hard line on the treatment of refugees and undocumented migrants.

Freedom of the press has also come under attack. On April 11, Defense Minister Ismail Saabri announced that the government would take “stern action” against online media that “misreport” the news. Journalist Tashny Sukumaran was questioned over her report on a round-up of migrant workers, and in June, police opened an investigation of Boo Su-Lyn, editor of the health news portal CodeBlue, under the Official Official Secrets Act and the penal code for a series of articles about the findings of an independent investigation into an October 2016 hospital fire that killed six patients. The investigation remained open at time of writing.

In July, after Al Jazeera aired a documentary about Malaysia’s treatment of migrant workers during the Covid-19 pandemic, the police announced that they were investigating Al Jazeera for sedition, defamation, and violation of the Communications and Multimedia Act (CMA). The police questioned six Al Jazeera staff members and raided the organization’s offices in Kuala Lumpur. In August, Malaysia refused to renew the visas of two Al Jazeera journalists based in the country.

The Immigration Department announced that it had revoked the work permit of Mohammed Rayhan Kabir, a migrant worker from Bangladesh who featured in the documentary. He was arrested on July 24 and remanded for investigation. Malaysia deported him back to Bangladesh on August 21.

The government also sought to hold online news portals responsible for comments posted by their readers. On June 15, the Attorney General filed an application to initiate contempt proceedings against online news portal Malaysiakini for five reader comments. On July 13, the Federal Court announced that it would be taking time to deliberate before issuing a decision.

In July, the home minister banned Rebirth: Reformasi, Resistance and Hope in New Malaysia under the Printing Presses and Publications Act after claims that the book’s cover resembled the country’s coat of arms. The book contains a collection of writings about the 2018 general election and subsequent events compiled by editor Kean Wong. Police raided the publishing company and questioned journalist Tashny Sukumaran and seven Malaysiakini journalists who had authored chapters.

Police abuse of suspects in custody continues to be a serious problem, as does a lack of accountability for such offenses. In August, the government withdrew a bill submitted by the prior administration to create an Independent Police Complaints and Misconduct Commission “because the police objected to it.” The government instead introduced a bill to create a toothless Independent Police Conduct Commission that lacks both key investigative powers and the authority to punish wrongdoing. The proposed commission would not even be able to visit lock-ups without giving advance notice, and is precluded from even investigating any act covered by the standing orders issued by the police inspector general.

The standard of care for those in detention is also problematic, with detainees dying of treatable illnesses. The government reported that 23 people, including two children, died while in immigration detention during the first six months of 2020. During the same period, three people died while in police lock-ups, and 188 prison inmates died.

Malaysia has not ratified the 1951 Refugee Convention. Over 175,000 refugees and asylum seekers, most of whom come from Myanmar, are registered with the United Nations High Commission for Refugees (UNHCR) office but have no legal status and remain unable to work or enroll in government schools.

The new government has taken a hard line on refugees, with the home minister stating that they have “no status, rights, or basis to present any demands to the government.”  The authorities pushed boatloads of desperate Rohingya refugees who were trying to reach Malaysia’s shores back out to sea, claiming that they were doing so to prevent the spread of Covid-19. Those that have been permitted to land have been detained as “illegal migrants,” with some prosecuted for immigration violations. Even children have been detained in “shelters” and threatened with prosecution. Malaysia did little to stop a vicious online hate speech campaign against Rohingya refugees in the country in April.

The government confirmed in September 2020 that Malaysia will not entertain requests from China to extradite Uyghur refugees and will allow them safe passage to third countries.

The government has yet to release the findings of the Royal Commission of Inquiry (RCI) set up in 2019 to investigate mass graves found in remote jungle camps on the Thai-Malaysian border in 2015. To date, no Malaysians have been held responsible for their role in the deaths of over 100 ethnic Rohingya trafficking victims whose bodies were found in the camps. The 12 police officers initially charged in the case were released in March 2017.

Malaysia’s efforts to contain the spread of Covid-19, while generally successful, had a disproportionate impact on marginalized communities. While authorities initially stated that they would not take action against undocumented migrants who came forward for testing, on April 29, the defense minister announced that all “illegal immigrants” found in areas under enhanced movement control orders would be sent to detention centers when those orders ended. On May 1, hours after the easing of some restrictions, authorities raided one such area and rounded up hundreds of migrants.

The authorities ultimately conducted multiple raids, ensnaring thousands of migrants and detaining them in overcrowded and unsanitary immigration detention centers to await deportation. Several UN experts expressed concern that the crackdown was “severely undermining efforts to fight the pandemic” and immigration detention centers subsequently reported an increase in confirmed cases of Covid-19.

Migrants and refugees who lost their jobs due to the pandemic were excluded from government aid programs, and many were left unable to feed their families. At least 17 migrants from Myanmar committed suicide between March and September.

In Malaysia, over 6.6 million students enrolled in pre-school through to secondary school were impacted by school closures, according to UN estimates. Pre-existing inequalities in education were exacerbated by students’ unequal access to the internet, with rural and indigenous communities particularly affected.

Malaysia restricts the rights of followers of any branches of Islam other than Sunni, with those following Shia or other branches subject to arrest for deviancy. In August, the Court of Appeal partially set aside a High Court ruling that Ahmadiyya adherents were not subject to Sharia (Islamic law) in Malaysia because the Islamic authorities there do not consider them as Muslims. The Court of Appeal ruled that if the Ahmadiyya were proven to have converted from Islam, then the religious authorities would have authority over them, and sent the case back to the High Court for a determination of the original faith of the 39 plaintiffs.

In January, the High Court granted Sisters in Islam, a civil society group working to promote the rights of Muslim women, a stay on the enforcement of a fatwa issued against it in 2014. The stay was issued pending appeal of a High Court ruling dismissing a challenge to the fatwa for lack of jurisdiction. The broadly worded fatwa declares that Sisters in Islam and “any individuals, organizations and institutions holding on to liberalism and religious pluralism” are deviant from Islamic teachings.

In April, the United States Commission on International Freedom of Religion recommended that Malaysia be placed on a special watch list for violations of religious freedom.

Malaysia continues to detain individuals without trial under restrictive laws. SOSMA allows for preventive detention of up to 28 days with no judicial review for a broadly defined range of “security offenses.” Both the 1959 Prevention of Crime Act and the 2015 Prevention of Terrorism Act give government-appointed boards the authority to impose detention without trial for up to two years, renewable indefinitely, to order electronic monitoring, and to impose other significant restrictions on freedom of movement and association. No judicial review is permitted for these measures.

Discrimination against lesbian, gay, bisexual, and transgender (LGBT) people remains pervasive in Malaysia. Federal law punishes “carnal knowledge against the order of nature” with up to 20 years in prison and mandatory whipping. Numerous state Sharia laws prohibit both same-sex relations and non-normative gender expression, resulting in frequent arrests of transgender people. Activists have filed two court cases, in the High Court and the Federal Court, challenging the existence and use of these laws in Selangor. In July, the minister in charge of religious affairs gave “full licence” to the religious authorities to take action against transgender people, both through arrests and religious education to “return” them to the “right path.” In August, after activist Nicole Fong responded to his statement by posting a series of infographics online critical of the official “mukhayyam” program—which aims in part to influence LGBT people to renounce their non-normative gender identity or sexual orientation—religious authorities lodged a police report against her.

Malaysia continues to permit child marriage under both civil and Islamic law, in violation of its obligations under international law. Girls age 16 and older can marry with permission of their state’s chief minister. For Muslims, most state Islamic laws set a minimum age of 16 for girls and 18 for boys, but permit marriages below those ages, with no apparent minimum, with the permission of a Sharia court. Widespread school closures due to Covid-19 may also increase risks of child marriage, as research shows that leaving education is highly correlated with girls being married off.

The Malaysian government has called for the Association of Southeast Asian Nations (ASEAN) to find effective solutions to the Rohingya crisis, declaring itself unable to take any more Rohingya refugees. Although China is Malaysia’s largest trading partner, in July 2020 Malaysia “rejected in its entirety” China’s claims to rights in the South China Sea encompassed by the nine-dash line. Malaysia has also joined the World Health Organization’s Solidarity Call to Action, calling for a Covid-19 Technology Access Pool to “realize equitable global access to Covid-19 health technologies through pooling of knowledge, intellectual property and data.”