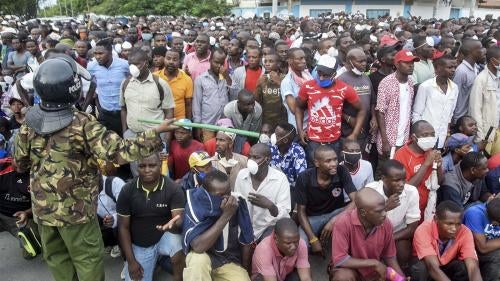 Although the March 2018 handshake between President Uhuru Kenyatta and main opposition leader, Raila Odinga, eased political tensions, authorities have not taken any significant steps to ensure electoral reforms. President Kenyatta and Odinga proposed a referendum to create the position of prime minister, presumably to accommodate Kenyatta who is term-barred from running again in 2022.

Killings by police have remained largely unaddressed, with the Independent Policing Oversight Authority (IPOA), a civilian police accountability institution, unable, for various reasons, to investigate and prosecute most of the over 2,000 incidents of police killings currently on its files. IPOA has only managed six successful prosecutions since its establishment in 2011.

In April, Human Rights Watch found that police had killed at least six people within the first 10 days of Kenya’s dusk-to-dawn curfew, imposed on March 27, to contain the spread of Covid-19. The police, without apparent justification, shot and beat people at markets or on the way home from work, even before the daily start of the curfew. Police also broke into homes and shops, extorted money from residents or looted food in locations across the country. In July, Kenyan organizations documented 15 cases of killings by police across Kenya while enforcing coronavirus control measures.

On April 3, authorities made mask wearing mandatory for everyone in public places and introduced mandatory quarantine for those who did not wear masks or breached curfew, but parliament rejected that requirement on April 21.

In joint research in May 2020, Human Rights Watch, Kenya Human Rights Commission, and Journalists for Justice found that Kenyan authorities could have been inadvertently facilitating transmission of the Covid-19 virus while forcefully quarantining tens of thousands of people in facilities that lacked proper sanitation, protective equipment, and food.

On April 18, 2020, two human rights groups, the Nairobi-based Kenya Legal and Ethical Issues Network on HIV and Aids (KELIN) and the Mombasa-based Muslims for Human Rights (MUHURI) filed a petition seeking to compel government to cover all costs incurred by those quarantined. The petitioners alleged that government implemented quarantine measures in an abusive, degrading, and unconstitutional manner. At time of writing, the matter was still pending in court.

In June, a Kenyan court awarded $1.3 billion Ksh (US$12 million) to the 3,000 residents of Owino Uhuru, a suburb of Mombasa, for damages related to pollution from a nearby lead smelter that recycled lead-acid batteries. The court ruled that government agencies responsible for enforcing regulations at the plant must clean up the site within four months.

Human Rights Watch documented the forced eviction of more than 50,000 people from Mau Forest lands in an effort by authorities to conserve Mau Forest Complex, including more than 40,000 in July 2018 and around 10,000 between August and November 2019. Some of the evictees had been living on the land for over 30 years.

During the 2018 evictions, at least nine people, including two babies, died. Officials beat people, torched homes, and destroyed crops and people’s livelihoods, leaving thousands of people homeless and stranded in the cold. In July 2020, Human Rights Watch found that, in the aftermath of the 2019 evictions, another seven people died, two directly due to police violence and the rest as a result of hostile camp conditions.

The government has not investigated the deaths, injuries, and other abuses. Authorities have not relocated, or compensated evictees as required under Kenyan law. Most of those evicted are living in harsh conditions in makeshift camps in Narok county.

In July 2020, President Kenyatta directed education officials and heads of schools to ensure that school girls receive ante-natal care, but authorities have not introduced measures to ensure that school heads do not expel pregnant girls from school. Kenya has made commitments to tackle exclusion in education, but the government’s approach to teenage pregnancies threatens its promises for girls’ education. Many adolescent mothers are out of school because they are blocked from returning or are not getting support to return.

Between May and July 2020, as a measure to combat the spread of Covid-19, the government ordered the closure of all schools across the country. These school closures exacerbated previously existing gender-based inequalities. Ministry of Health data reported by Kenyan media indicated an increase in teenage pregnancies in each of the 47 counties, whose numbers ran into several thousands, during the lockdown.

Kenyan media reported that government officials believed the pregnancies were as a result of defilement of teen girls, who would potentially drop out of school due to stigma. In April, the National Council on Administration of Justice reported “a significant spike in sexual violence” cases in many parts of the country in the first two weeks of the lockdown.

Kenya punishes consensual same-sex relations with up to 14 years in prison. Its High Court rejected a constitutional challenge to the ban in 2019. In April 2020, the court upheld a Kenya Film Classification Board ban on Rafiki, a love story about two young women. At time of writing, activists were appealing both rulings.

In a June 2020 report, Human Rights Watch and FIDA-Kenya found that many women in Kenya lack support to claim their matrimonial property despite legal reform on equality and non-discrimination. The report found that ambiguous and antiquated laws on matrimonial property and inheritance remain on the books and that discriminatory practices make it difficult for married, divorced, separated, and widowed women to claim property the law entitles them to.

Despite a legal framework touted as being “gender-responsive” in Kenya, women encounter multiple social, legal, and judicial barriers in claiming their share of matrimonial property. The law requires that monetary and non-monetary contributions be considered in sharing property at the end of a marriage, but it does not clarify the proof of contribution required.

Kenya continues to play a major role in the east and Horn of Africa region and has maintained close political and economic ties with the United States, China, and European nations.

In March 2020, tension between Kenya and Somalia appeared to escalate when clashes between Somali National government forces and Jubaland troops in Belet Hawa spilled across the border into Mandera, a Kenyan town bordering Somalia. Kenya warned Somalia against threatening its territorial integrity and sovereignty, but the tension appeared to ease after President Kenyatta and his Somali counterpart, Mohamed Abdullahi “Farmaajo,” agreed to de-escalate the tensions.

Kenya received significant technical and financial support to address the Covid-19 crisis from the European Union, individual EU member countries, China, the United States, the World Bank, and the International Monetary Fund, even as Kenyan media and civil society groups have expressed concerns about the government’s inability to investigate and prosecute those alleged to have misappropriated the COVID-19 response funds.