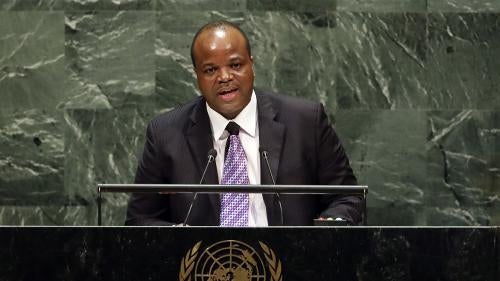 In 2020, Eswatini remained an absolute monarchy ruled by King Mswati III, who has led the country since 1986. There are no legally recognized political parties in the country due to a ban by a 1973 decree. Despite the adoption of the 2005 constitution, which guarantees basic rights and the country’s international human rights commitments, the government has not reviewed the decree or changed the law to allow the formation, registration, and participation of political parties in elections. In 2020, the government of Eswatini proposed a new omnibus cybercrime bill which threatens freedom of speech and media freedoms.

Restrictions on freedom of association and assembly continued in 2020. On October 20, the Eswatini High Court heard a challenge from Eswatini Sexual and Gender Minorities (ESGM) against the Eswatini Registrar of Companies’ refusal to register ESGM as a company. ESGM is a human rights community-based advocacy organization working to advance the protection of the rights of lesbian, gay, bisexual, transgender and intersex persons in the kingdom of Eswatini. The registrar argued that ESGM could not be registered as a company because “ESGM’s objectives were unlawful because same-sex sexual acts are illegal in the country.”

ESGM responded by arguing that Eswatini’s constitutional rights apply to everyone, that everyone in the kingdom has a right to their dignity, and that freedom to associate should not be denied based on arbitrary grounds, including one’s sexual orientation. At time of writing, the court had yet to issue its ruling.

Rule of Law and Media Freedoms

King Mswati III continues to hold supreme executive power over  parliament and the judiciary due to a 1973 State of Emergency decree. The country’s courts have upheld the legality of the decree despite the fact that the 2005 constitution provides for three separate organs of state—the executive, legislature and judiciary. The prime minister theoretically holds executive authority, but in reality, the king exercises supreme executive power and controls the judiciary. The 2005 constitution provides for equality before the law while simultaneously elevating the king above the law.

In 2020, Reporters Without Borders ranked Eswatini 141 out of 180 countries on media freedom, based partly on constraints that journalists face in working freely under the absolute monarchy, and because courts are not permitted to prosecute representatives of the monarchy.

In August, Eswatini authorities gazetted a new omnibus cybercrime bill. The bill has a number of disturbing elements, including serious criminal penalties for publishing so called fake news and for “cyber bullying.” It provides that any person who publishes a statement or “fake news” through any medium, including social media, with the intention to deceive any other person or group of persons commits an offense, and if convicted is liable to a fine not exceeding  £10 million (US$600,000) or imprisonment not exceeding 10 years, or both. The bill, if adopted, will further constrain independent journalism and critical speech.

The under-representation of women in leadership and decision-making positions in both public and private sectors continued during 2020, with little effort to implement provisions of the 2018 Election of Women Act. The act is designed to ensure the fulfillment of the constitutional requirement of representation quotas for women and marginalized groups in parliament.

Eswatini has committed itself to some regional and international instruments to promote gender equality. These include the Convention for the Elimination of All Forms of Discrimination Against Women (CEDAW). Eswatini has ratified  this convention without reservation and the Southern African Development Community (SADC) Declaration on Gender and Development. Article 20 of the Eswatini Constitution provides for equality before the law and non-discrimination on several protected grounds, but not including language, sexual orientation or gender identity. Eswatini’s dual legal system where both the common law, which is based on Roman Dutch law and Eswatini unwritten customary law operate side by side. This has resulted in conflicts, resulting in numerous violations of women’s rights over the years.

In June, the International Trade Union Confederation (ITUC) published results of an annual survey indicating that Eswatini has one of the worst workers’ rights records in the world. Eswatini scored five on the Global Rights Index—five being worst on the scale—capturing its failure to respect workers’ rights and the fact that Eswatini workers are exposed to repression and unfair labor practices. According to the ITUC, countries with the five rating provide no guarantees for rights and are among the worst countries in the world in which to work.

During 2020, Eswatini grappled with the coronavirus pandemic, which severely strained the health infrastructure and negatively impacted the economy and people’s livelihoods. By mid November,  Eswatini had 6,144 confirmed Covid-19 cases with 119 deaths. On March 17, King Mswati III declared a national emergency in response to the pandemic and closed schools, colleges, and universities. All public and private gatherings of 50 or more people including conferences, funerals, weddings, entertainment and sporting activities were suspended. The government partially re-opened schools for external examination classes only, while the rest of the classes are scheduled to resume in 2021, according to a statement issued by Eswatini Prime Minister Ambrose Mandvulo Dlamini.

In June, the Commonwealth secretariat issued a statement committing to continue its support to Eswatini to help ensure the country’s Commission on Human Rights and Public Administration (CHRPA) meets international standards. The Commonwealth noted that since its inception the commission has not complied with the standards set out in the Paris Principles as it operates without any legislation to clearly define its operational parameters.

In a March 8 statement  to mark International Women’s Day, the UN resident coordinator for Eswatini, Nathalie Ndongo-Seh, noted that 48 percent of women and girls in the country experience some form of sexual violence in their lifetime. She nevertheless commended the government for working to ensure that women and girls are protected from sexual and gender-based violence. On behalf of the UN agencies in Eswatini, Ndongo-Seh pledged continued support to the government of Eswatini and civil society to design and implement educational programs that promote human rights and gender equality.