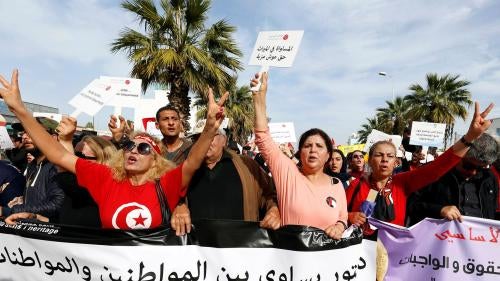 Tunisia stalled during 2018 on reforming repressive laws and establishing key institutions to protect human rights. Although freedom of expression was generally respected, with a variety of independent media able to operate freely, Tunisian authorities continued to prosecute speech considered offensive to “public morals” or “public decency.” The state of emergency, which was declared in November 2015 following a deadly attack on the presidential guard, was last extended in October 2018 for a period of one month. Authorities used the state of emergency to impose house arrest on hundreds of people accused of threatening state security.

On June 12, a commission on Individual Freedoms and Equality, appointed by President Beji Caid Essebsi, delivered its report recommending decriminalizing sodomy, ensuring equality between men and women in inheritance, eliminating “morality” laws, and abolishing the death penalty. The president publicly endorsed the recommendation for legal equality in inheritance but has so far remained silent on the other recommendations.

Because parliament had failed to elect its allotted quota of Constitutional Court members, the body could not begin to perform its function, affirmed in the constitution, of scrutinizing and invalidating existing laws that do not conform with human rights standards. Several other constitutional authorities, such as the Human Rights Commission and Commission on Corruption and Good Governance, have yet to be established.

Authorities made progress in harmonizing legislation with the constitution. In 2016, parliament revised the Code of Criminal Procedure to grant suspects the right to a lawyer from the onset of detention, and shortened the maximum duration of pre-charge detention to 48 hours, renewable once, for all crimes except for terrorism cases, where pre-charge detention can last up to 15 days. Defense lawyers welcomed the new law for making it easier for them to visit their detained clients and monitor their treatment.  Nevertheless, spotty implementation meant that lawyers did not always get prompt access, and detainees still suffered from violations of their due-process rights while in pre-charge custody.

Freedom of Expression, Association and Assembly

Tunisian authorities continued to prosecute civilians in military courts based on articles in the code of military justice prohibiting the defamation of the army. A military court sentenced parliamentary deputy, Yassine Ayari, to three months in prison on June 26, 2018, for a Facebook post criticizing the army. He was also sentenced on March 27 to 16 days in prison for another blog post. On November 1, the military appeals court increased his sentence in this last case to three months in prison. The decision was not enforced and Ayari had not been imprisoned at time of writing.

Tunisian authorities continued to use articles in the penal code and other laws that criminalize freedom of speech, despite adopting, in November 2011, Decree Law 115 on freedom of the press that liberalizes the legal framework applicable to written media. On September 13, 2018, a first instance court in Ben Arous gave Amina Mansour, a blogger, a suspended two-month prison sentence for a Facebook post in which she declared the head of government’s “war on corruption” to be “fake.” She was sentenced on the basis of article 86 of the Telecommunications Code, which criminalizes the offense of “harming others or disturbing their well-being through the internet,” and article 128 of the penal code, which penalizes defaming public servants.

In trying to quell the social protests that gripped much of Tunisia during January 2018, police beat those arrested and denied their right to a lawyer under Tunisian law. They also arrested and held for up to two days some people for blogposts or for distributing leaflets that peacefully criticized government policy and called for social justice. The United Nations special rapporteur on the rights to peaceful assembly and association expressed concern about reports of arbitrary arrests and disproportionate use of force during the protests.

Parliament adopted, on July 27, a new law creating a National Registry of Organizations that encroaches on Decree Law 88, adopted in 2011, which liberalized the legal framework governing associations. Under the new law, an association is required to file a “registration receipt,” a document the government is required to deliver to the association once it submits its bylaws and constitutive documents.

Unlike Decree law 88, which provides that the registration receipt is presumed received if the government does not respond within 30 days, the new law does not provide for automatic registration when authorities withhold it, thus making legal recognition dependent on the administration’s good will. In a December 2017 report, the International Financial Action Task Force (FATF) listed Tunisia as among the countries deficient in combating money laundering and terrorism financing. It recommended enhancing transparency of the non-profit sector. The law creating a national registry is seen in part as addressing the FATF’s recommendations.

Tunisia adopted legislation in 2013 to deal with the crimes of the past, which included the creation of a Truth and Dignity Commission. The commission was mandated to investigate all serious human rights violations from 1955 to 2013 and is designed to provide accountability for torture, forced disappearances, and other abuses of the past. It has received more than 62,000 complaints and held confidential hearings for more than 50,000 of these.

Parliament undermined the process of transitional justice by voting not to allow the Truth and Dignity Commission to exercise its prerogative to extend its mandate by one year.

The Transitional Justice Law mandates the commission to transfer serious crimes to specialized chambers to be established within the country’s court system that “will have jurisdiction over widespread or systematic human rights violations, including deliberate killing, rape and sexual violence, torture, enforced disappearance, and execution without fair trial guarantees.”

On May 29, the first trial of past violations in a specialized chamber opened in the city of Gabes. The trial related to the forced disappearance of Kamel Matmati, an Islamist activist whom the police arrested in 1991.

The commission transferred to the specialized courts 16 other cases of human rights violations, including cases of torture, enforced disappearances, and arbitrary detentions. As of November, no verdicts had been reached.

Security and State of Emergency

The state of emergency President Essebsi declared after a 2015 suicide attack on a bus that killed 12 presidential guards remained in effect at time of writing. It is based on a 1978 decree that empowers authorities to ban strikes or demonstrations deemed to threaten public order, and to prohibit gatherings “likely to provoke or sustain disorder.” Under the decree, authorities have placed hundreds of Tunisians under house arrest. Conditions of the house arrests were eased in 2018, but many who remained under house arrest were also placed under a travel ban procedure called “S17,” which applied to anyone the state suspects of intending to join a fighting group abroad. The procedure allows restrictions on movement both abroad and inside Tunisia. A person placed under the S17 procedure risks lengthy questioning whenever they are stopped at a routine police check. The procedure is based on vague language in the law regulating the work of the Ministry of Interior.

A Commission on Individual Freedoms and Equality, appointed by President Essebsi in 2017, issued its final report on June 12, 2018.  The commission recommended, among other things, equality between men and women in inheritance.

On August 13, the president endorsed this recommendation, pledging to introduce a bill to amend the personal status code that would eliminate discrimination against women on inheritance except when a person opts out of the equality rule by formally expressing such a wish in his will. At time of writing, no such bill has been introduced in parliament.

In February, the European Parliament failed to override the classification of Tunisia as a high-risk country for money-laundering and terror funding by the European Commission. The actions of the European Union bodies followed the critical reports on Tunisia by the Financial Action Task Force (FATF).

The UN special rapporteur on freedom of religion or belief conducted a visit to Tunisia in April 2018. He noted that there are few explicit restrictions on freedom of religion or belief, but that some groups—such as Tunisia’s small Bahai community—face indirect restrictions, especially through failure to obtain registration as associations that would grant them the legal status they need to carry out several institutional functions or display their faith publicly.