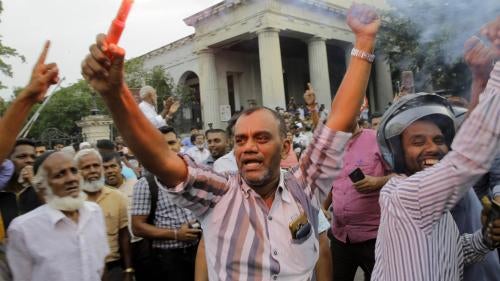 Sri Lanka plunged into a constitutional crisis after President Maithripala Sirisena abruptly dismissed the prime minister on October 26, 2018, and replaced him with Mahinda Rajapaksa—the former president linked to widespread abuses whom Sirisena defeated in the January 2015 presidential elections. Sirisena then dissolved parliament and called for new elections. There were protests and lawsuits to challenge his decision. The crisis ended after the Supreme Court, on December 13, ruled that Sirisena’s actions were unconstitutional. Rajapaksa stepped down as prime minister.

The political crisis further slowed progress on ensuring truth and justice for grave rights violations during the 27-year-long civil war between the separatist Liberation Tigers of Tamil Eelam (LTTE) and government forces.

Promise of security sector reform remained elusive. The government forwarded several drafts of new counterterrorism legislation, which local groups and the international community criticized for being overbroad, despite some genuine reforms.

Violence against minority communities, particularly against Muslims, led to at least two deaths.

Sri Lanka acceded to the 2008 Convention on Cluster Munitions on March 1, 2018, becoming the first South Asian country to ban these indiscriminate weapons. This followed its accession to the 1997 Mine Ban Treaty on December 13, 2017.

President Sirisena’s sudden decision to appoint Mahinda Rajapaksa as prime minister raised fears about a return to past abusive practices in the country and a further delay in transitional justice. Rajapaksa stepped down only after the Supreme Court ruled that the president’s actions were illegal.

After the defeat of the LTTE in 2009, instead of addressing allegations of serious violations by both sides, the Rajapaksa government suppressed media, targeted rights activists, and continued to arbitrarily detain and torture perceived opponents. The new government that took office after Rajapaksa’s electoral defeat in 2015, pledged at the United Nations Human Rights Council to ensure accountability for conflict-related abuses.

By 2018, however, while Sri Lanka had acted on some of the human rights-related undertakings, it failed to make much progress on transitional justice. Of the four mechanisms adopted at the Human Rights Council—an office on missing persons; a truth and reconciliation commission; reparations and non-recurrence; and a special court to ensure accountability through prosecutions—only the first had been established, three years later.

The government stated it had drafted a bill on reparations for victims, under the terms of the Human Rights Council resolution. However, given the ongoing political uncertainty, it is unclear what future any of the transitional justice mechanisms will have.

While the government made progress in returning land occupied by security forces or other state agencies, usually after protests by communities, vast areas remain under government control. Some of the land was seized during the conflict, while some new land was occupied after the conflict ended. Although the government claims it needs to hold onto areas occupied by the military for national security reasons, activists say in some places the land is being instead used for commercial gain through farms, businesses, and tourism.

Sri Lanka has not endorsed the international Safe Schools Declaration, which encourages armed forces to refrain from using schools for military purposes, as occurred during the conflict.

Despite pledges, the government failed to repeal and replace the Prevention of Terrorism Act (PTA), a draconian law widely condemned for including an overly broad definition of terrorism and lengthy administrative detention provisions that have facilitated due process violations, including the use of torture, to obtain confessions.

Sri Lanka’s Human Rights Commission had unfettered access to places of detention, which has helped lower the levels of abuse against those in custody.

In July, Ben Emmerson, former UN special rapporteur on the promotion and protection of human rights and fundamental freedoms while countering terrorism, released a report on Sri Lanka that concludes progress on overhauling the PTA has “ground to a virtual halt.”

In March, local altercations burst into anti-Muslim riots, leading to the death of at least two people. Following the incidents, the government announced a 10-day nationwide state of emergency.

In recent years, Sri Lanka has witnessed a spate of anti-Muslim violence linked to ultra-nationalist Sinhalese Buddhist groups. The current wave began in late February in the eastern district of Ampara, followed by clashes in Kandy. Observers reported that two mosques and dozens of homes, small businesses, and vehicles were destroyed. Authorities arrested several suspects in the attacks, but concerns remained about police inaction during the violence.

The government failed to respond to the many recommendations made during the 2017 hearings before the UN Committee on the Elimination of Discrimination against Women (CEDAW). These included concerns about protection issues for victims and witnesses who might appear before the transitional justice mechanisms or the courts, and the lack of women appearing before various consultations on the constitution and the transitional justice mechanisms.

As also raised by CEDAW, the government has yet to take steps to address institutional barriers and law enforcement prejudice to help ensure that women and girls are able to access justice, including in cases of sexual or domestic violence.

No discernable progress was made on reforming laws affecting Muslim women on issues concerning inequalities around marriage and divorce.

Sri Lanka has not revoked sections 365 and 365A of the penal code, which criminalize consensual same-sex conduct. Some lesbian, gay, bisexual, and transgender (LGBT) people—particularly those who are visibly gender non-conforming—face arbitrary arrest, police mistreatment, and discrimination in accessing health care, employment, and housing. The Health Ministry established a Gender Recognition Certificate in 2016, that allows people to change their legal gender, but requires psychiatric evaluation first. The government accepted recommendations to protect LGBT people from discrimination in the report of its Universal Periodic Review, adopted in March, but did not accept recommendations to decriminalize same-sex conduct.

Following the political upheavals in November, many governments called on the Sri Lankan government to abide by its constitution.

In her first update to the Human Rights Council in September 2018, the UN High Commissioner for Human Rights called on Sri Lanka for speedier and more meaningful implementation of its traditional justice commitments, and underlined the importance of “more progress in advancing accountability and truth-seeking”.

The mandate of the Human Rights Council resolution on Sri Lanka will expire in March 2019, when a further resolution will be needed to ensure the HRC holds Sri Lanka to its commitments on accountability issues.

The United States claims it will continue to engage on concerns around human rights accountability despite pulling out of the Human Rights Council. The US conducted joint exercises and training with Sri Lankan military as part of an effort to send members of the forces to UN peacekeeping operations.

China remained engaged with Sri Lanka through the “One Belt, One Road” initiative, which will draw significant infrastructural development through the country, although concerns remained about political compromises that the Sri Lankan government may make to enable this, including control of a Chinese-built port.