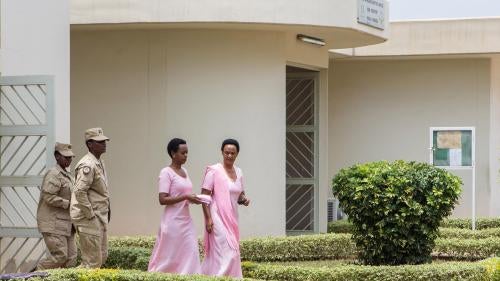 The ruling Rwandan Patriotic Front (RPF) and President Paul Kagame continued to exert control over the political landscape in Rwanda, as political opposition leaders have been intimidated and silenced, arrested, or forced into exile. The RPF won an overwhelming victory in legislative elections in September, following Kagame’s re-election with a reported 98.8 percent of the vote in the 2017 presidential elections. A 2015 referendum changed the constitution and allowed Kagame to run for additional terms.

In July, the United Nations Subcommittee on Prevention of Torture (SPT) cancelled its visit to Rwanda, due to a lack of cooperation from Rwandan authorities, making it the first time in 11 years the SPT would cancel a visit. The National Commission for Human Rights is yet to publish a report on the killing of Congolese refugees by police in the Western Province.

While some private radio stations occasionally broadcast programs on “sensitive” issues, most print and broadcast media continued to be heavily dominated by pro-government views. Most journalists were unable or unwilling to engage in investigative reporting on politically sensitive issues and rarely criticized government policies, because of intimidation, threats, and prosecutions in previous years.

The BBC Kinyarwanda service remained suspended, as it has been since 2014.

After many years of state intimidation and interference, independent civil society organizations are very weak and few document and expose human rights abuses by state agents.

The RPF won parliamentary elections in September, with 40 of the 53 elected seats. The Democratic Green Party of Rwanda won at least 5 percent of the vote, granting the party two parliamentary seats. This will be the first independent voice in Rwandan parliament in several years.

The trial of former would-be 2017 presidential candidate Diane Rwigara and her mother, Adeline Rwigara, opened in May 2018. The women, along with four others tried in absentia, were charged with “inciting insurrection or trouble among the population.” Diane Rwigara was also charged with “forging or alteration of documents” and “use of counterfeited documents,” and Adeline Rwigara with “discrimination and sectarian practices.” On October 5, the High Court ordered their release on bail. The women were acquitted of all charges on December 6.

Diane Rwigara, her sister Anne, and their mother were arrested in September 2017, after Diane Rwigara had been barred from filing her candidacy for the August presidential elections. In the days leading up to her arrest, she spoke with international media outlets and criticized police actions and accusations against her. Hours before her arrest, Rwigara told one outlet that her family was being “persecuted for criticizing the government.” Anne Rwigara was later released, and the charges against her dropped.

The charges of inciting insurrection were related to comments Diane Rwigara made at a press conference in July 2017 in which she was critical of the government. The charges related to forged documents and their use stemmed from allegations from the National Electoral Commission that many of the signatures supporting her candidacy were invalid. The incitement and discrimination charges against Adeline Rwigara appeared to be based on private WhatsApp messages. Some of these messages that leaked to pro-government Rwandan press were critical of the government.

Disproportionate Use of Force at Kiziba Refugee Camp

In February 2018, Rwandan police used excessive force and fired live ammunition to suppress a demonstration of several thousand Congolese refugees protesting camp conditions and a cut in food rations in Karongi district, Western Province. Some of the refugees, who were unarmed, threw stones at the police. While the police stated that five refugees were killed, the United Nations refugee agency (UNHCR) publicly stated that at least 11 refugees were shot dead and called for an independent investigation. Human Rights Watch received testimony from survivors indicating that at least 12 refugees were killed, with several others still missing and feared dead.

Police arrested 15 refugees during the incident, and others were arrested in the days and weeks after the protest. Tensions boiled again at the Kiziba refugee camp in May, leaving one refugee dead and leading to the arrest of at least 42 others. At time of writing, many of those refugees remain in detention, accused of organizing protests or throwing stones at police officers, among other charges.

In March, the National Commission for Human Rights issued a statement deploring the injuries and deaths that resulted from the protests and stating that a public detailed report would follow an investigation. At time of writing, the commission has not published the report.

In April, the Ministry of Disaster Management and Refugee Affairs, the government agency that manages Kiziba, dissolved the refugees’ executive committee in Kiziba, blaming the committee for the “unrest.” This move, coupled with the arrests, prompted many members of the executive committee to flee the country.

Most of the refugees, ethnic Banyamulenge from neighboring Democratic Republic of Congo, have been in Rwanda since 1996.

Without access to the country, allegations of continued cases of unlawful detention in 2018 were difficult for Human Rights Watch to confirm. Ugandan media reported on the high-profile cases of Dennis Karera, a businessman and brother of the current justice minister, and Karenzi Karake, a former intelligence chief, who were allegedly victims of enforced disappearances following arrest by state security agents on July 25. Karera was released on August 6. Karake remains missing. When asked by Ugandan media, state authorities have denied holding Karake.

People previously arrested and accused of crimes against state security remained in unlawful detention centers. In July, the trial started in Nyanza, Southern Province, for a group of 25 people accused of state security crimes. They had been arrested in 2017 and held in a police station in Gikondo, a residential suburb of Kigali, commonly called “Kwa Gacinya.” Some of the accused shared information with Human Rights Watch about beatings and torture in Kwa Gacinya.

The detention of street vendors, sex workers, street children, and other poor people in so-called transit centers continued across the country. Detention at these centers is arbitrary and conditions are harsh and inhumane.

In April, Rwandan lawyer Donat Mutonzi was found dead in police custody in suspicious circumstances, 10 days after he was arrested.

In June 2017, the UN International Residual Mechanism for Criminal Tribunals (IRMCT) in Arusha granted Augustin Ngirabatware’s request for a review of his appeals judgment. His request was based on the grounds of “new information of an evidentiary nature” of relevance to the case. The International Criminal Tribunal for Rwanda (ICTR) sentenced Ngirabatware, a former planning minister in the government of former Rwandan President Juvénal Habyarimana, to 35 years’ imprisonment in 2012 for genocide, incitement to commit genocide, and rape as a crime against humanity.

In 2014, the ICTR’s appeals chamber reduced his sentence to 30 years’ imprisonment. Ngirabatware was arrested in 2007 in Germany and transferred to the ICTR in 2009. The review of the appeals judgment, previously slated to begin on September 24, 2018, was adjourned until further notice.

Linked to Ngirabatware’s case, five Rwandans were arrested and transferred to Arusha, Tanzania, in September in relation to an indictment issued by the chief prosecutor of the IRMCT. The court said in a statement that the five had “offered bribes and exerted pressure to influence the evidence of protected witnesses” in the case. The five are accused of contempt of court, incitement to commit contempt, and interfering with the administration of justice.

In June, an appeals court in Brussels, Belgium, ruled that the Belgian state was not responsible for the massacre of some two thousand ethnic Tutsis at Kigali’s Ecole Technique Officielle (Official Technical School, ETO) during the 1994 genocide. The court said that the UN was responsible, given that the Belgian soldiers who evacuated the site and failed to protect the Rwandan civilians were serving as part of a UN force. The Rwandan National Commission for the Fight against Genocide (Commission nationale de lutte contre le génocide, CNLG) denounced this ruling as politically motivated.

In July, the SPT, which oversees enforcement of the Optional Protocol to the Convention against Torture (OPCAT), ratified by Rwanda in 2015, terminated its visit to Rwanda. The visit had been suspended in October 2017 due to obstruction by the Rwandan government. In its decision to terminate the visit, the SPT cited a lack of cooperation from the government and concluded “there was no realistic prospect of the visit being successfully resumed and concluded within a reasonable timeframe.” This is the first time the SPT has taken such action in its 11 years of existence.

The government rejected the allegations of lack of cooperation and declared they were made in bad faith.

An annual report by the UN secretary-general released in September identified Rwanda as one of 38 countries where human rights defenders face reprisals for cooperating with the UN on human rights.