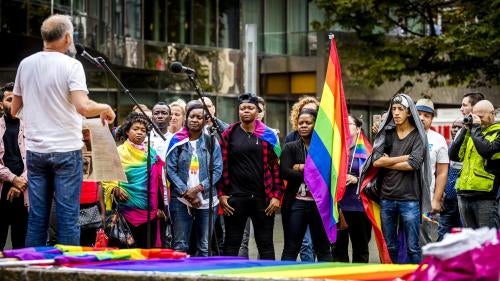 The government moved to limit accommodation for newly arrived asylum seekers in the country, arguing that local authorities were increasingly meeting demand, and during the year closed multiple shelters, with the aim of reducing capacity from 31,000 to 27,000. The reduction in reception capacity for the second year in a row gave rise to concerns about the adequacy of provision for arriving asylum seekers.

In July, the government announced that it planned to improve procedures to assess asylum claims based on fear of persecution on grounds of lesbian, gay, bisexual, and transgender (LGBT) identity or religious conversion, by treating cases in a more individualized manner, following criticism by NGOs and parliamentarians.

Notwithstanding the results of a non-binding public referendum in March rejecting a sweeping new surveillance law passed the previous year by parliament, the law entered force in May. Domestic rights groups remained critical of the new bulk interception powers, the level of oversight of those powers to intercept bulk data, and controls over sharing material derived from the interception with other countries’ intelligence agencies.

In June, the Minister of Justice and Security confirmed to parliament that the government continued to exercise powers to deprive terror suspects abroad of their Dutch citizenship, although he refused to confirm how many individuals had citizenship removed. The same month a Dutch court expressed concerns about whether the limited safeguards in the process are consistent with the EU Charter of Fundamental Rights.

A May ruling by Limburg district court found the Dutch law requiring people to identify as either male or female on official documents, including birth certificates, to be too restrictive and urged legislators to make statutory provision for a gender-neutral option.