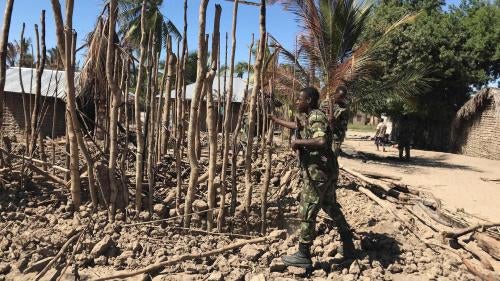 The government of Mozambique under President Filipe Nyusi struggled to protect people’s rights in 2018. State security forces were implicated in serious human rights violations in their response to attacks by suspected Islamist armed groups in the northern province of Cabo Delgado. Thousands were displaced as armed men attacked villages, burned houses and killed people.

Mozambican law enforcement failed to hold anyone to account for serious abuses documented by Human Rights Watch and other organizations, including threats and intimidation against activists and human rights defenders. The work of the press, especially private media and correspondents, was under threat after the government issued a decree that imposed high fees on media organizations seeking to operate in the country.

Violations and Attacks in the North

Attacks by a suspected armed Islamist group in the northern province of Cabo Delgado killed at least 39 people and left more than 1,000 displaced between May and July 2018. The wave of attacks on civilians began in October 2017, when suspected armed Islamists attacked a police station in the Mocimboa da Praia district, causing two days of lockdown in the area and a military response that led to the evacuation of villages. Despite the police presence in the region and the establishment of a special military operation to fight the armed groups, attacks on villages continued sporadically in 2018.

Human Rights Watch documented killings, arson, destruction of property, and other abuses committed by the group locally known as both Al-Sunna wa Jama’a and Al-Shabab. In one village of Macomia district, the group burned 164 houses and five cars, and killed scores of cattle during a night attack on June 5. Residents said the attackers beheaded a local Islamic leader inside a mosque before burning down the mosque, which housed copies of the Quran and prayer mats. In June, Human Rights Watch witnessed dozens of families carrying their belongings and fleeing their villages. On June 6, the group raided the village of Namaluco, in Quissanga district, killing six people and burning more than 100 houses. On June 12, the group attacked the village of Nathuko, in the Macomia district, where they beheaded an elderly man and burned down at least 100 homes. Between May and July, the group attacked at least three districts of Cabo Delgado province and burned down more than 400 homes, leaving thousands homeless. In August, the United Nations World Food Programme (WFP) began distributing food aid to 10,000 people who fled the attacks and sought refuge in makeshift camps set up by local authorities.

Security forces were also implicated in serious human rights abuses during their response to the violence in Cabo Delgado province. Following the first attack in October 2017, authorities closed down seven mosques and detained more than 300 people without charge, including religious leaders and foreigners suspected of having links to the armed attacks in Palma and Mocimboa da Praia districts. Security forces also prevented suspected members of the armed group from receiving medical treatment.

In August, a South African businessman, Andre Hanekon, was kidnapped by security forces and was later found injured in a local hospital in Pemba, Cabo Delgado. On September 11, he was detained, accused of involvement in attacks by armed groups in the region, but no formal charges have been brought against him.

Mozambican law enforcement failed to hold anyone to account for serious abuses documented by Human Rights Watch and other organizations. The case of journalist and lawyer Ericino De Salema, who was kidnapped and beaten in Maputo in March, remains unresolved, as well as the cases of 10 high-profile figures, including senior opposition members, state prosecutors, and prominent academics, who were either killed or injured in politically motivated attacks in 2016.

Authorities failed to investigate human rights abuses committed by government security forces during military clashes with armed men from the opposition Renamo. Human Rights Watch documented cases of enforced disappearances, arbitrary detention, and the destruction of private property by government forces, as well as political killings, attacks on public transport, and looting of health clinics by the Renamo political party’s armed group, between November 2015 and December 2016. Since the ceasefire was declared in December 2016, fighting and related human rights abuses have ceased. But authorities have not held anyone accountable.

Activists and human rights defenders continued to live in fear in the face of threats and intimidation from unknown individuals. On March 27, Salema was abducted by two unidentified gunmen outside the headquarters of the National Union of Journalists in the capital, Maputo. They beat him with AK-47 assault rifles, leaving him unconscious just outside the city. Salema was a resident political commentator on one of Mozambique’s leading television shows. Two other former commentators from the same show said they decided to cut ties with the program after receiving frequent threats from unidentified people who claimed to work for the state security and intelligence services.

Following the incident, six activists said they received threatening messages for criticizing the government. Two said they had been forced to move, use different cars, and change their routines after noticing vehicles without license plates following them in the city or parked outside their homes for hours.

Press freedom, especially for private media and correspondents, was threatened by the Mozambican government’s issuance on July 23 of Decree 40/2018, which required foreign journalists to pay US$2,500 per trip to Mozambique for media accreditation. Freelancers and foreign correspondents based in the country would be charged $500 and $8,300 per year, respectively.

The new regulations also established new fees for the establishment of Mozambican media organizations, imposing a $3,300 fee for new publications and an $800 fee for new community radio stations. Local journalists’ groups and other nongovernmental organizations criticized the government for approving the controversial decree without consultations. In August, the director of the Mozambican Information Office, Emilia Moiane, said the decision to increase the fees had been put on hold pending further consultations.

In January 2018, police stopped an attempt to kidnap an 11-year-old boy in the central province of Zambezia. The boy had been attacked by five people, who cut off his ears and shaved his head before the police arrived. In July 2018, a 10-year-old boy was abducted from his home in Niassa province in northern Mozambique. In early September, two children with albinism, ages 4 and 11, were reportedly abducted in separate incidents in Niassa province.

The Mozambique group of 14 donor countries, including the United Kingdom and European Union, and multilateral institutions, including the International Monetary Fund and World Bank, continued the freeze on direct support to the state budget because of corruption concerns. Some international partners continued to support crucial sectors. The United States, for example, maintained its support for malaria and HIV programs, while the European Union is supporting the strengthening of civil society groups and protection of human rights defenders.

In March, the US criticized the kidnapping of Salema and defended the importance of a free and independent media as a pillar of Mozambican democracy. In April, the UN special rapporteur on freedom of opinion and expression and the UN special rapporteur on human rights defenders sent a communication to Mozambique echoing the US’s concerns. They also expressed their concern at the absence of thorough investigations and accountability for any alleged perpetrators of attacks against activists, and stated that the ensuing impunity contributes to the recurrence of these crimes.

On June 25, President Nyusi announced that Russia and the US had offered to help fight terrorist attacks in northern province of Cabo Delgado, but did not provide further details.