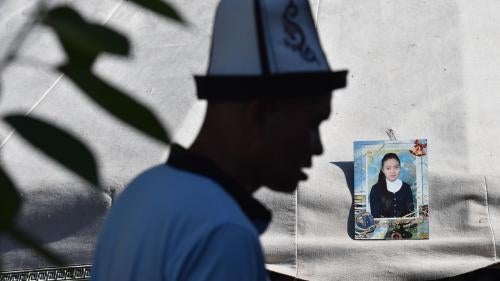 Long-term human rights concerns persisted in the first year of Soronbai Jeenbekov’s presidency, even as blatant attacks on media freedoms became less frequent, and the president appeared to seek more constructive engagement with civil society. Violence against women, including bride-kidnapping, and impunity for torture persisted. Kyrgyzstan has not released the wrongfully imprisoned human rights defender Azimjon Askarov. As authorities have stepped up counter-extremism measures, criminalizing possession of extremist materials, the overbroad definition of extremism, and breaches of due-process have led to human rights violations. In September, Kyrgyzstan’s prime minister signed a decree initiating ratification of the United Nations Convention on the Rights of Persons with Disabilities (CRPD), which Kyrgyzstan signed in 2011.

Eight years after the June 2010 interethnic violence, victims continued to wait for justice. Ethnic Uzbeks were disproportionately affected by the violence, which left more than 400 dead and destroyed thousands of homes, and was followed by numerous cases of arbitrary detention, ill-treatment, and torture. Authorities did not review torture-tainted convictions delivered in the aftermath of the June 2010 events.

In its May 2018 concluding observations, the UN Committee on the Elimination of Racial Discrimination (CERD) noted with concern “the persistence of … tensions, notably between the Kyrgyz majority and the Uzbek minority” in Kyrgyzstan, and cautioned that the government’s official inter-ethnic relations policy “focused on creating a national identity that is not explicitly inclusive of all ethnicities and may tend to reignite past conflicts.”

Kyrgyzstan continued to ignore its obligation to fulfill a 2016 UN Human Rights Committee (HRC) decision to release the imprisoned human rights defender, Azimjon Askarov. In May, the CERD “expressed concern about the State party’s continuing failure to restore the rights of Azimjan Askarov.”

In early 2018, five human rights organizations discovered that two of their reports, a 2015 report on labor migrants submitted to the UN Committee on the Rights of Migrant Workers and “A Chronical of Violence,” detailing the June 2010 violence, published in 2012, had been included on a government list of banned “extremist” material following a January 2017 court ruling. The court also banned ADC Memorial, a Brussels-based rights organization and co-author of one of the reports, from conducting activities in Kyrgyzstan. In October, Kyrgyzstan’s Surpreme court overturned the ruling and returned the case for consideration to a lower court.

In February and May, Kyrgyzstan’s current and former presidents withdrew their respective claims to significant damages that courts had awarded in unfounded defamation lawsuits against journalists in 2017, somewhat lessening the impact of the 2017 media crackdown. President Jeenbekov withdrew his claim to compensation only after Kabay Karabekov, the journalist he sued, issued a formal apology. In June, travel bans imposed in 2017 on journalists Narynbek Idinov and Dina Maslova, and rights defender Cholpon Djakupova, were lifted.

Prosecutors in April dropped charges of “illegal receipt of commercial secrets” and “disclosing secret commercial information” in the criminal case against freelance journalist Elnura Alkanova. Charges were brought against Alkanov in 2017 after the Moscow-based Ferghana News, an independent news website, published her investigative reports on alleged corruption in the sale of government-owned prime real estate.

In February, prosecutors brought charges of “disseminating false information” against satirist poet Temirlan Ormukov, whose writings were critical of the former president. The case was ongoing at time of writing.

The government continued counterterrorism crackdowns following deadly attacks abroad that investigators link to armed extremists of Central Asian origin. At least 358 people have been convicted in Kyrgyzstan since 2010 for possessing videos, literature, and other material alleged to fall under a broad and vague definition of extremism, many in cases where prosecutors presented no evidence that suspects intended to incite violence or distribute the material. One hundred of those convictions were handed down during the first eight months of 2018. Prosecutors opened 174 additional criminal cases involving possession of extremist material during that period. Suspects in extremism-related investigations have alleged abuses such as planting of evidence, beatings to extract confessions, or payoffs.

Impunity for widespread domestic violence persists, despite a 2017 domestic violence law that mandates police and judicial response to domestic violence and guarantees greater legal protections for victims. In July, the Prosecutor General's Office commented in the media that “in the last two years” it had registered more than 9,000 cases of violence against women and children and had opened 5,456 administrative cases and 784 criminal cases.

In May, 20-year-old Burulai Turdaaly Kyzy was stabbed to death in a police station by a man who had kidnapped her for marriage. In response, UN agencies in Kyrgyzstan called on authorities “to take all appropriate measures to stop [bride kidnapping, forced marriage, and child religious marriages] and fulfil its domestic legislation and international treaties.” Twenty-three law enforcement officers were sanctioned in the case, including five who were fired. Prosecutors charged the perpetrator and an accomplice with “forcing a woman to marry,” and brought an additional murder charge against the perpetrator. Their trial was ongoing at time of writing.

The UN Committee on the Elimination of Discrimination against Women found after an inquiry published in September “into bride kidnapping” that a “culture of abduction, rape and forced marriage violates women’s rights in Kyrgyzstan,” and called on Kyrgyzstan “to strengthen its legislation and law enforcement, in particular by preventing, investigating, punishing and providing reparation for all crimes of abduction and related sexual violence.”

Impunity for ill-treatment and torture remains the norm, with criminal cases into allegations of ill-treatment or torture rare, and investigations and trials delayed or ineffective. On June 25, at national anti-torture consultations hosted by the National Center for the Prevention of Torture, on the occasion of the International Day to Support Victims of Torture, the prosecutor general’s office reported that it had registered 418 cases of torture in 2017, and brought charges of “torture” against 15 law enforcement officers.

After a visit to Kyrgyzstan in September, the UN Subcommittee on Prevention of Torture found that most of its recommendations from 2012 had yet to be implemented and that safeguards against torture “are not protecting [apprehended people] appropriately.”

In May, Kyrgyzstan flouted the principle of nonrefoulement in extraditing to Kazakhstan Murat Tungishbaev, an activist, despite the serious risk of ill-treatment and torture and politically motivated prosecution he faced there. Tungishbaev fled Kazakhstan in 2012, after Kazakh security services summoned him for reporting on an oil workers’ strike and violent clashes in Zhanaozen town in 2011. His asylum claim was pending at the time of his extradition.

Lesbian, gay, bisexual, and transgender (LGBT) rights groups reported that LGBT people continue to face ill-treatment, extortion, and discrimination by state and non-state actors. In August, following a local newspaper’s publication of a photograph of four Kyrgyz LGBT activists participating in a pride parade in Europe, the activists received anonymous death threats and were subject to online hate speech. The activists reported the threats to the State National Security Committee; an investigation is underway. There is widespread impunity for such abuses. Consideration of an anti-LGBT bill, which would ban “propaganda of nontraditional sexual relations,” remained stalled in parliament.

A January 2018 European Union-commissioned “Gender Study for Kyrgyzstan” found that “adequate measures to protect the fundamental rights of LGBT people as guaranteed by the Constitution and the International Covenant on Civil and Political Rights (ICCPR) do not exist.”

In December 2017, the EU and Kyrgyzstan launched negotiations for an enhanced partnership and cooperation agreement. In April, High Representative/Vice-President Federica Mogherini met President Jeenbekov to discuss negotiations and cooperation. In a draft recommendation on the negotiation, the European Parliament called for Azimjon Askarov’s release, and respect for human rights in the context of countering terrorism.

The EU in January issued its two-year interim report on Kyrgyzstan’s compliance with GSP+ requirements, noting with respect to human rights standards that “successful implementation [of the legal framework] is often hindered by inactivity or non-compliance with the law by local investigators, law enforcement bodies and courts.”

In its 2017 annual human rights report, published in April, the US identified use of torture and arbitrary arrest by law enforcement officials, increasing pressure on independent media, and politically motivated prosecutions as being among Kyrgyzstan’s “most significant human rights issues.”

In April, the Organization for Security and Co-operation in Europe (OSCE) Parliamentary Assembly president, George Tsereteli, expressed concern about media freedoms and freedom of expression in Kyrgyzstan.

Following his May visit, UN Special Rapporteur on the Right to Health Dainius Pūras acknowledged Kyrgyzstan’s political will to invest in primary healthcare and good efforts towards improving maternal health, but criticized discrimination in the healthcare system, informal payments for services, and cited the need for improved mental healthcare services.