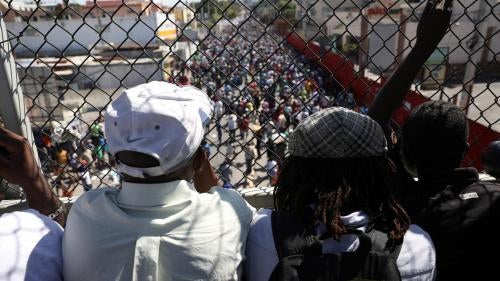 In July 2018, the government’s announcement that it would eliminate subsidies, allowing fuel prices to increase by up to 50 percent, led to widespread protests and the worst civil unrest the country has seen in years. A resurgence of gang violence has led to further instability. The National Human Rights Defense Network (RNDDH) researched a November 13 incident in La Saline in which it alleges at least 59 people were killed and called for an official investigation, including into the alleged involvement of members of the Haitian National Police and other officials.

Haitians remain susceptible to displacement by natural disasters, including tropical storms and hurricanes. In October, an earthquake left 17 people dead and over 350 injured. More than 140,000 households still need decent shelter, more than two years after Hurricane Matthew in which between 540 to 1,000 people died, according to different estimates.

As of May 2018, nearly 38,000 people, 70 percent of them women and children, lived in displacement camps formed after the 2010 earthquake. Authorities have not provided assistance to resettle them or return them to their places of origin. As of May, at least 17 of 26 remaining displacement camps lacked adequate sanitary facilities.

The country’s most vulnerable communities continue to face environmental risks, such as widespread deforestation, pollution from industry, and limited access to safe water and sanitation. Low rainfall exacerbates food insecurity in the country.

Since its introduction by UN peacekeepers in 2010, cholera has infected more than 800,000 people and claimed nearly 10,000 lives. However, intensified control efforts—including an ambitious vaccination campaign—have resulted in a significant decline in cases, from more than 41,000 suspected cases and 440 deaths in 2016, to just over 3,000 suspected cases and 37 deaths from January through August 2018.

Haiti’s prison system remains severely overcrowded, with many inmates living in inhumane conditions. In 2016, the United Nations estimated that nearly all inmates in Haiti’s national prison system have access to less than one square meter of space and most are confined for 23 hours a day. According to the former UN Independent Expert on Haiti, overcrowding is largely attributable to high numbers of arbitrary arrests and the country’s large number of pretrial detainees.  In July 2018, Haitian prisons housed nearly 12,000 detainees, 75 percent of whom were awaiting trial.

Illiteracy is a major problem in Haiti. According to the UN Development Programme (UNDP), approximately one-half of all Haitians age 15 and older are illiterate. The quality of education is generally low, and 85 percent of schools are run by private entities that charge school fees that can be prohibitively expensive for low income families. At least 350,000 children and youth remain out of primary and secondary school throughout the country.

Accountability for past human rights abuses continues to be a challenge in Haiti. In August, a federal court in the United States ruled that a case alleging torture, murder, and arson—in the rural town of Les Irois in 2017 and 2018—could proceed against a former Haitian mayor now living in the US, Jean Morose Viliena. The lawsuit was filed on behalf of Haitian media activists and human rights defenders who survived a campaign of violence allegedly led by Viliena and his political supporters.

As of November 2018, a re-opened investigation into crimes committed by former President Jean-Claude Duvalier’s collaborators remained pending. Duvalier died in 2014, six months after the Port-of-Prince Court of Appeal ruled that the statute of limitations could not be applied to crimes against humanity and ordered that investigations against him should continue for human rights crimes allegedly committed during his tenure as president from 1971-1986. Allegations of violations include arbitrary detentions, torture, disappearances, summary executions, and forced exile.

There has been little progress towards consideration of a criminal code reform submitted to parliament in April 2017 that would address some of these gaps in protection. The draft criminal code would also partially decriminalize abortion, which is currently prohibited in all circumstances, including in cases of sexual violence.

In 2017, the Haitian Senate passed two anti-LGBT bills, which were under consideration by the Chamber of Deputies as of November 2018. One bill would regulate conditions for the issuance of the Certificat de Bonne Vie et Mœurs, a document that many employers and universities require. The bill lists homosexuality, alongside child pornography, incest, and commercial sexual exploitation of children, as a reason to deny a citizen a certificate.

The other bill calls for a ban on gay marriage, as well as any public support or advocacy for LGBT rights. Should the ban become law, “the parties, co-parties and accomplices” of a same-sex marriage could be punished by three years in prison and a fine of about US$8,000.

Widespread use of child domestic workers—known as restavèks—continues. Restavèks, most of whom are girls, are sent from low-income households to live with wealthier families in the hope that they will be schooled and cared for in exchange for performing household chores. Though difficult to calculate, some estimates suggest that between 225,000 and 300,000 children work as restavèks. These children often work for no pay, are denied education, and are physically or sexually abused.

In addition to those deported, many people left the Dominican Republic under pressure or threat. Of more than 6,000 under investigation, the UN Refugee Agency (UNHCR) has verified legitimate Dominican nationality for more than 2,800 individuals now in Haiti.

During the first six months of 2018 alone, nearly 70,000 Haitians were returned to their country. After being renewed three times, the Plan for the Regularization of Foreigners ended in August 2018, leaving more than 200,000 Haitians who remain in the Dominican Republic without valid paperwork at continued risk of deportation.

In the past decade, foreign investors have pursued the development of Haiti’s nascent mining sector. In July 2017, the Haitian government presented a draft mining law to parliament, prepared with assistance from the World Bank. According to the Center for Human Rights and Global Justice (CHRGJ), the draft law grants insufficient time for adequate environmental review, restricting the government’s ability to thoroughly study the documentation and limiting opportunity for public participation or comment, and is silent on the rights of individuals displaced by mining activities. In addition, it contains provisions that could render all company documents confidential for 10 years, preventing affected communities from engaging in meaningful consultation about mining projects. As of November 2018, the draft law was awaiting consideration by parliament.

At the end of the UN Stabilization Mission in Haiti’s (MINUSTAH’s) mandate in October 2017, the UN adopted a new, smaller peacekeeping mission, the UN Mission for Justice Support in Haiti (MINUJUSTH), intended to contribute to help promote rule of law, police development, and human rights. In April, the Security Council extended MINUJUSTH’s mandate for one year. The council also affirmed its intention to consider the mission's drawdown and transition to a non-peacekeeping mission by October 2019.

In 2016, the secretary-general apologized for the UN’s role in the cholera outbreak and announced a new approach to cholera in Haiti. This included intensifying efforts to treat and eliminate cholera and establishing a trust fund to raise $400 million to provide “material assistance” to those most affected by the epidemic. As of November 2018, only $17.7 million had been pledged to the effort.

The UN has concluded a pilot consultation in the area where cholera started, but has indicated that funds will be used for community projects, regardless of consultation outcomes. Victim advocates have criticized the UN for failing to put victims at the center of its response.

According to figures from the UN Office of Internal Oversight Services, at least 102 allegations of sexual abuse or exploitation were made against MINUSTAH personnel between 2007 and 2017. In December 2017, 10 Haitian mothers of 11 children fathered and abandoned by UN peacekeepers filed the first legal actions in Haiti for child support.

In June, Haiti announced that Oxfam Great Britain had lost its right to operate in the country, after a scandal involving sexual exploitation by staff engaged in relief activities following the 2010 earthquake.

In its April concluding observations on Haiti, the UN Committee on the Rights of Persons with Disabilities found that adults and children with disabilities face ill-treatment and chaining in institutions and that women with intellectual disabilities may face contraceptive procedures without their consent. The committee also criticized the absence of legislation prohibiting discrimination based on disability; failure to promote independent living in the community; and laws that deny people with disabilities legal capacity.

In October, a federal judge issued a preliminary injunction temporarily blocking the decision by President Donald Trump’s administration to terminate Temporary Protected Status (TPS) for Haitians effective July 2019, which would affect an estimated 60,000 Haitians who were permitted to stay in the US following the 2010 earthquake.