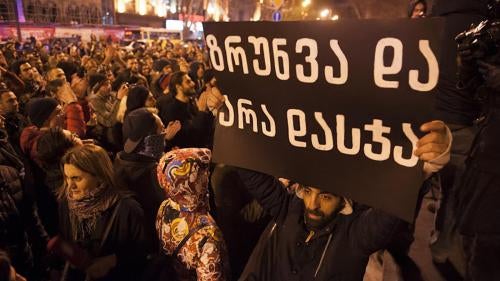 The October 2018 presidential election brought Georgia’s past and current human rights problems to the forefront of political debates. Authorities took steps to establish a mechanism to investigate abuse by law enforcement, but did not give it full independence. Other areas of concern included unjustifiably harsh drug laws, occupational safety and labor rights, discrimination against lesbian, gay, bisexual, and transgender (LGBT) people, and threats to media pluralism.

The presidential elections, Georgia’s last direct presidential vote, resulted in a runoff between the ruling party-backed candidate Salome Zurabishvili and the opposition candidate Grigol Vashadze. According to local and international observers “candidates were able to campaign freely and voters had a genuine choice,” but there were instances of the ruling party’s misuse of administrative resources. The second round was scheduled for late November.

Impunity for abuse by law enforcement officials remained a persistent problem. Investigations, if launched, often led to charges that carry lesser, inappropriate sanctions and rarely resulted in convictions. Authorities routinely refused to grant victim status to those who alleged abuse, depriving them of the opportunity to review investigation files.

By September, the Ombudsman’s Office received 149 complaints of ill-treatment by prison staff or police and petitioned the prosecutor’s office to launch investigations in eight cases. None resulted in criminal prosecution.

In July, parliament adopted a law creating a State Inspector’s Office, a separate body in charge of investigating abuses by law enforcement. The law grants the prosecutor a supervisory role over this body’s investigations, including the right to give mandatory directives on any investigative procedure, or change investigative decisions, which compromises the body’s independence.

In May, a court’s partial acquittal of suspects in the stabbing to death of two 16-year-olds in a December 2017 brawl among 15 high school students prompted mass protests about law enforcement bias. The victims’ families claimed that the Prosecutor’s Office had deliberately concealed or manipulated evidence. The protests led to the chief prosecutor’s resignation and the creation of an interim parliamentary commission. Opposition parliamentarians made up the majority of the commission.

In September, the commission concluded that a former employee of the Prosecutor’s Office who is related to two of the brawl participants helped conceal some elements of the crime. In a dissenting opinion, the commission’s ruling party members claimed that the investigation’s flaws were due not to any individual, but rather to the “flawed system of investigation.” Zaza Saralidze, father of one of the victims, criticized the ruling party’s conclusion as an attempt to protect those who falsified the investigation. Public protests resumed. Authorities arrested Saralidze in October on charges of assaulting a police officer, after he struck an officer who tried to stop him from erecting a tent outside the parliament building. Released on bail, Saralidze could face up to seven years’ imprisonment.

In December 2017, State Security Service (national intelligence agency) officers shot to death Temirlan Machalikashvili, 18, an alleged terror suspect, during an operation in Pankisi Gorge, which neighbors Russia’s Chechnya. According to an official account, Machalikashvili tried to detonate a hand grenade during arrest, an allegation vehemently denied by his family, who claimed that he was sleeping when the officers entered his room and opened fire. Authorities eventually launched an investigation into Machalikashvili’s killing, which was still pending at time of writing. Authorities refused to grant Machalikashvili’s family victim status, limiting their access to the investigation files.

In May, three-day public protests took place over alleged heavy-handed police behavior during drug raids on two night clubs in the capital, Tbilisi. Two leading rights groups, the Georgian Young Lawyers’ Association (GYLA) and the Human Rights Education and Monitoring Center (EMC), documented excessive use of police force against spontaneously gathered protesters outside the clubs immediately after the raids, and arbitrary detention of many.

In a commendable move, authorities created a human rights department under the Interior Ministry, overseeing investigations into domestic violence, hate crimes, and crimes committed by and against children.

Although the overall numbers of drug-related prosecutions continued to decline, authorities continued to use harsh drug laws to prosecute people for mere consumption or possession of drugs for personal use. Drug-related felonies often result in long sentences, prohibitive fines, and deprivation of other rights, including the right to drive a vehicle or work in an array of professions. Police compelled thousands of people to take drug tests, in some cases by arbitrarily detaining them for up to 12 hours.

In response to a July Constitutional Court decision that struck down all remaining penalties for marijuana consumption, authorities proposed a bill that would legalize cannabis consumption at home, but impose penalties for public use. It also criminalized consuming marijuana in the presence of a child and while driving. Marijuana purchase or possession remained a crime.

According to the Georgian Trade Union Confederation, 29 workers died and 24 were injured in work-related accidents through July. Eleven of them died in mining accidents. In March, parliament adopted a law on labor safety that applies to only high-risk areas of work. The law authorizes the labor inspectorate to inspect an employer without a court order following an accident, but limits its mandate to work safety issues, as opposed to other labor standards. All other inspections must be court-ordered.

According to the ombudsman, LGBT individuals often experience abuse, intolerance, and discrimination in every sphere of life. Homophobic statements by public officials feed widespread homophobia in society.

In June, Justice Minister Tea Tsulukiani tried to deflect generalized criticism of her tenure by invoking her conservative position on gender recognition, possibly to tap into public transphobia. A group of prominent nongovernmental groups (NGOs) had demanded Tsulukiani’s resignation over her failure to implement key justice reforms, including in the judiciary. Tsulukiani responded by saying these groups held a grudge against her because she refused to register “a person with male organs as female” and vice-versa. Georgian law allows gender recognition for transgender people, however, transgender people are required to present proof of gender reassignment surgery.

In December 2017, parliament amended the broadcasting law, expanding the Public Broadcaster’s powers to, among other things, allow it receive additional revenues from commercial advertising. Private television stations and NGOs criticized the move, citing concern that the publicly-funded television’s entry to the already shrinking advertisement market, would threaten sustainability of smaller, regional broadcasters, and undermine media pluralism. The president vetoed the bill in January for those reasons, but the parliament overturned the veto.

The ownership dispute over Georgia’s most-watched television broadcaster, Rustavi 2, remained pending before the European Court of Human Rights (ECtHR). A former owner alleged that he had been forced to sell the station below the market value and sought to restore his rights. Rustavi 2’s current owners allege the lawsuit is government-orchestrated to take over the opposition-minded station. The dispute raised concerns over government interference with media.

In its first implementation report on the European Union–Georgia Association Agreement, adopted in November, the European Parliament hailed the country’s progress, but also called on authorities to address some outstanding concerns, such as labor standards, environmental protection, and discrimination against vulnerable groups and women.

In his July report, the United Nations (UN) independent expert on the enjoyment of all human rights by older persons noted, inter alia, the “frequent” nature of old age discrimination in the labor market, gender-based violence, lack of programs preventing violence against older persons, low pensions, and poverty. She called on authorities to devise a strategy addressing discrimination and ageism.

In October, following his country visit, the UN expert on the protection against violence and discrimination based on sexual orientation and gender identity, Victor Madrigal-Borloz, commended authorities’ commitment to addressing violence against LGBT persons, but also urged authorities to address bullying, harassment, and public exclusion.

According to the US annual human trafficking report, released in June, although the government meets minimum standards for eliminating trafficking, the country remains a source, transit, and destination for trafficking for sex work and other forced labor.

The UN, EU, US, and Georgia’s other bilateral and multilateral partners issued statements on the 10th anniversary of the Georgia-Russia war, some calling for an end to the occupation of Georgian territories.

The International Criminal Court continued its investigation into war crimes and crimes against humanity allegedly committed in the lead-up to, during, and after the August 2008 war between Russia and Georgia over South Ossetia.