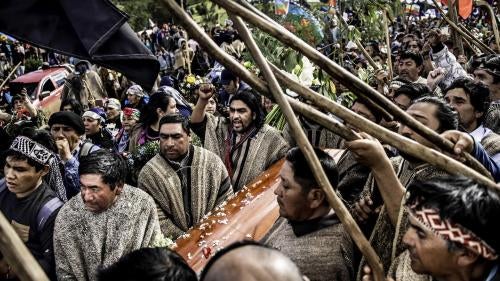 After Sebastian Piñera took office in March 2018 for his second, although non-consecutive, presidential term, his administration took steps that could impact the rights of several vulnerable groups within Chile. The Piñera government supported a bill granting transgender individuals the right to change their name and gender in the civil registry, took steps to replace the flawed National Service for Minors (SENAME), established protections for thousands of migrants with irregular immigration status, and announced an ambitious plan to improve the standard of living of indigenous communities in La Araucanía.

Despite Chile’s successful passage of a law decriminalizing abortion in certain circumstances in 2017, women still face significant barriers to access. Many doctors and private institutions continue to refuse to provide abortions on moral grounds even when permissible under the law. The Piñera government promulgated rules that would have made it easier for medical providers and publicly funded hospitals to refuse to provide any abortion services, but Chile’s comptroller general declared the rules unlawful.

Notable convictions in 2018 include three former agents of the Chilean secret police (DINA) for the murder of the leader of the Revolutionary Left Movement, Miguel Enríquez Espinosa, on October 5, 1974;  eight ex-military officers for the kidnapping, torture, and murders of pop singer Víctor Jara and former prison director Littré Quiroga Carvajal, during the coup in September 1973; and 24 former DINA agents for their participation in the enforced disappearances of 119 leftist collaborators between 1974 and 1975, known as “Operation Colombo.”

In November 2018, Juan Emilio Cheyre, an officer under Pinochet and the commander-in-chief of the Chilean army from 2002-2006, was convicted for his role in the murder of 15 people following the 1973 coup. Juan Emilio Cheyre is the most senior official to be held accountable for human rights abuses during the Pinochet years.

Chile continues to maintain a 50-year veil of secrecy over victim’s testimony given to the National Commission on Political Prison and Torture from November 2003 to May 2004. The testimony revealed places of detention and torture methods used by the dictatorship, and identified former political prisoners and torture victims. The Bachelet administration submitted a bill to lift the secrecy order in 2017, which generated heated debate between those who believe revealing the testimony would violate victims’ rights to privacy, and those who believe revealing it is necessary to fully punish the guilty and bring justice to victims.

In a controversial decision in July 2018, the Supreme Court granted conditional release to seven former police and military officers who had been serving sentences for human rights abuses committed during the Pinochet dictatorship. Members of opposition parties attempted to remove the three Supreme Court judges responsible for the decision, but Chile’s congress rejected the attempt.

Chile’s 28-year ban on abortion came to an end in 2017 when the Constitutional Court upheld a new law decriminalizing abortion in three circumstances: when the pregnancy is the result of rape, the life of the mother is at risk, or the fetus is unviable. Although passage of the law signaled progress for reproductive rights in Chile, significant barriers to access remain even for legally permissible abortions.

The law in its current form allows doctors, as well as private institutions, to refuse to provide abortions on moral grounds. Chilean research organizations and the Ministry of Health have recently reported that high percentages of providers in Chile are “conscientious objectors” in one or more of the three circumstances. Nearly 50 percent of all medical providers in Chile object to providing abortions after rape, and some public hospitals lack a single provider willing to perform an abortion in that circumstance.

In March 2018, a new threat to women’s access to abortion arose when the Piñera administration eliminated the requirement that hospitals give a reason for refusing to provide abortions. Under Piñera’s regulatory change, hospitals could simply tell the Health Ministry that their doctors would not perform abortions. Likewise, doctors who were conscientious objectors no longer had to register as such in advance, which meant that clinics and hospitals could no longer ensure that they would always have a doctor available to provide an abortion. In May, Chile’s comptroller general abrogated the new regulations, restoring prior rules requiring doctors and institutions raising conscientious objections to opt out in writing in advance.

Chilean courts continue to prosecute Mapuche land-rights activists under the country’s counterterrorism law for violence and destruction of property during protests. The law has faced criticism for its overly broad definition of terrorism and insufficient due process guarantees. Both the Bachelet and Piñera administrations proposed modifications to update the law and clarify its scope, but the changes remained pending at time of writing.

In May 2018, three Mapuche land-rights activists were found guilty of arson under the counterterrorism law in connection with the deaths of prominent landowners, Werner Luchsinger and Vivianne Mackay, in May 2013. Two of the three were sentenced to life in prison. The activists had been acquitted for lack of evidence in an initial trial in October 2017 that was subsequently annulled.

The Piñera administration announced an ambitious plan to boost development and promote peace in the predominantly indigenous region of La Araucanía. The plan proposes US$24 billion in public and private investments between 2018 and 2026 for development projects, increased dialogue between indigenous communities and the state, and a constitutional reform recognizing and protecting the history, identity, culture, languages, institutions, and traditions of the indigenous population.

In November 2018, Camilo Catrillanca, a 24-year-old Mapuche activist, was shot and killed by agents of the Carabineros (Chile’s national police force). The killing was met with widespread outrage. Prosecutors determined that the Carabineros had destroyed video evidence of the killing. As a result, four agents directly involved in the incident were dismissed from the police force and two high-ranking officials submitted their resignation. The four agents were facing criminal prosecution for murder, attempted murder, and obstruction of justice at time of writing.

In September 2018, Chile’s congress voted to allow transgender individuals over 14 years of age to legally change their name and gender in the civil registry, with no requirement for surgery or change in physical appearance. The passage of the bill, which has been before Congress since 2013, marks an important step forward for the transgender community in Chile. The bill was pending final approval from President Piñera at time of writing.

The Bachelet administration’s bill to legalize same-sex marriage and allow same-sex couples the right to adoption or other reproductive options, submitted in August 2017, remains pending in the Senate.

In April 2018, the Piñera administration introduced amendments to the 2013 immigration bill. The changes, still pending at time of writing, aim to further regulate and systematize the immigration process to address the growing migrant population. Immigration laws have not been updated since 1975.

The amendments were accompanied by a series of administrative measures, including reforms to temporary residence permits and visas and the initiation of an “extraordinary regularization” process. The extraordinary regularization process allows anyone with an irregular immigration status who entered Chile before April 8, 2018, to remain in the country legally until their immigration status is resolved, provided they do not have a criminal background. As of June, 140,000 migrants, primarily from Haiti, Venezuela, and Peru, had registered for the regularization process.

In March 2018, President Piñera introduced a bill establishing new child protection and youth reintegration services and eliminating the National Service for Minors (SENAME). SENAME had been the subject of scrutiny for several years due to reports of abuse, ill-treatment, and death in its centers throughout the country.

Chile’s National Human Rights Institute (INDH) has filed dozens of lawsuits on behalf of inmates living in undignified and unhealthy conditions. The Santiago Court of Appeals ruled in favor of INDH in two such lawsuits in 2018 regarding Penal Colony I and II, establishing that it is unacceptable for prisoners to live in environments that do not provide clean water, mattresses, clothing, and proper sanitation. The court also ordered Chile’s national prison service to take steps to ensure prisoners’ rights to health and hygiene.

The Supreme Court released a report in February 2018 analyzing 53 prisons in Chile and documenting a serious problem with overcrowding, with some prisons at 140 percent capacity or more.

Chile was one of six governments to make the unprecedented request that the International Criminal Court open an investigation into the situation in Venezuela.

Chile has supported resolutions condemning abuses in Venezuela and Nicaragua before the Organization of American States.

The UN Committee Against Torture released a report in August urging Chile to lift the 50-year veil of secrecy on victims’ testimony, update the counterterrorism law, thoroughly investigate all abuses reported at SENAME centers, and take necessary steps to reduce overcrowding and improve conditions in prisons.

The UN Committee on the Elimination of Discrimination against Women released a report in March recommending that Chile decriminalize abortion in all circumstances and apply strict justification requirements for conscientious objection.