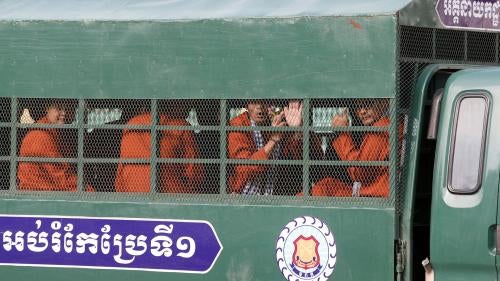 In anticipation of national elections in July 2018, the government of Prime Minister Hun Sen and his Cambodian People’s Party (CPP) intensified its onslaught on the political opposition, civil society groups, and independent media. In late 2017, the CPP-controlled Supreme Court dissolved the main opposition party, the Cambodia National Rescue Party (CNRP). Former opposition leader Sam Rainsy remained in exile after being convicted on politically motivated charges, while party chief Kem Sokha was jailed for nearly a year on dubious charges and has since been under house arrest. The CPP, facing no major opposition party, won all 125 seats in the National Assembly, effectively creating a one-party state. Hun Sen, in power since 1985, announced he wants to be the world’s longest-serving leader in history.

Cambodia’s politicized and corrupt judiciary continued to target individuals for peacefully criticizing the government, including online. During 2018, large numbers of opposition party members and activists fled the country to avoid arbitrary arrest. The number of political prisoners rose to more than 30 in July 2018, but 16 were released after the election on royal pardons sought by Hun Sen to deflect international criticism of the elections.

Media freedoms, already under pressure, collapsed in 2018. Threatening a massive, bogus tax bill, the government coerced the owners of the highly regarded Phnom Penh Post to sell to a Malaysian businessman with reportedly close ties to Hun Sen, making future critical reporting unlikely. By the end of 2018, Cambodia no longer had any local independent newspapers or radio and TV channels. Social media also came under assault, with criminal charges filed for posts to Facebook critical of the government.

The government frequently resorted to repressive laws, such as the Law on Associations and Non-Governmental Organizations (LANGO), to arbitrarily restrict the activities of human rights organizations and silence them. Democratic space in Cambodia has reached its lowest level since before the intervention over 25 years ago by the international community through the United Nations Transitional Authority in Cambodia (UNTAC), established to facilitate the implementation of the 1991 Paris Peace Accords. UNTAC assisted in ending the Cambodian civil war, created an environment conducive for civil society, and established a state that pledged to uphold democracy, rule of law, and human rights.

On January 4, 2018, a Phnom Penh investigating judge charged labor rights advocate Moeun Tola, director of the Center for Alliance of Labor and Human Rights (CENTRAL); free media advocate Pa Nguon Teang, director of the Cambodian Center for Independent Media (CCIM); and social activist Venerable But Buntenh, a Buddhist monk, with embezzlement in retaliation for being members of the funeral committee for Kem Ley, a popular political commentator who was assassinated in 2016. In July, the charges were dropped against Moeun Tola under pressure from global apparel brands, but charges remained against the two others at time of writing.

On August 20, the king pardoned longtime land rights activist Tep Vanny after two years in prison for protesting for justice in a land dispute involving a Chinese company granted a concession in Phnom Penh’s Boeung Kak Lake community. However, immediately afterwards, a court convicted her of making death threats in what started out as an internal community dispute in 2012. While the complainant had dropped her lawsuit, the prosecutor decided to pursue it on his own accord, leading to Tep Vanny and five other Boeung Kak Lake community members being sentenced to six months’ imprisonment; the judge suspended the sentence for five years.

The courts also proceeded with cases against other activists. On September 26, a Phnom Penh court convicted five former and current senior staff members of the Cambodian Human Rights and Development Association (ADHOC) of bribery of a witness, in a case that was widely criticized as being politically motivated, and imposed a five-year suspended prison sentence. An investigating judge had released them on bail in June 2017 after 427 days in pretrial detention.

Elections on July 29 were fundamentally flawed, denying Cambodians their right to freely choose their representatives. In addition to dissolving the CNRP, the Supreme Court-imposed a ban on 118 senior CNRP members from all political activity for five years.

Other serious problems with the electoral process included a lack of fair and equal access to the media; a pro-government national election commission; and surveillance, intimidation, detention, and politically motivated prosecution of key opposition members. The CPP based its crackdown on unsubstantiated claims that the CNRP intended to lead a “color revolution” to overthrow the government.

The CNRP’s founder Sam Rainsy and other leading opposition figures remained in exile to avoid enforcement of threatened prosecutions and pending prison sentences. His successor as leader of the CNRP, Kem Sokha, was detained for one year on bogus treason charges, before being released on bail in September and placed under house arrest.

CNRP lawmaker Um Sam An was royally pardoned and released on August 25, 2018, after having spent over two years in prison for an incitement conviction that arose out of his accusations against the government that the Cambodia-Vietnam border had been wrongfully demarked. On May 20, the appeals court upheld the conviction of 11 CNRP activists for “insurrection.” The 11 had already served three years of their 7 to 20-year prison terms on baseless charges for a 2014 demonstration in Phnom Penh, in which police were attacked after security forces assaulted peaceful protesters. On August 28, all 11, plus three more CNRP activists who had been sentenced separately on the same charges, were pardoned and released.

The government further curtailed freedom of media, including online publications. In May 2018, the government coerced the sale of the last independent local newspaper, the Phnom Penh Post, to a Malaysian businessman with reported ties to the Cambodian government by leveling the newspaper with a questionable unpaid tax bill of US$3.9 million. The Post, along with the previously shuttered local independent newspaper, the Cambodia Daily, had long provided investigative reporting frequently critical of the government.

On August 21, two former Radio Free Asia (RFA) journalists, Yeang Sothearin and Uon Chhin, were released on bail. They had been arbitrarily arrested on November 14, 2017, on fabricated espionage charges for allegedly having continued to report for RFA after the closure of RFA’s Cambodia office. The two remain under surveillance and on September 18, 2018, the Supreme Court ruled that the judicial investigation against them would continue.

On August 31, after 14 months of pretrial detention, an Australian filmmaker was convicted on trumped-up espionage charges and sentenced to six years in prison. He received a royal pardon on September 21, and was deported to Australia soon after.

Social media networks faced increased government surveillance and interventions. On May 28, the government issued a national decree, allowing the Ministries of Interior, Information, and Posts and Telecommunications to take down content on social media outlets and websites that the government deems to be “incitement, breaking solidarity, discrimination and willfully creating turmoil that undermines national security, public interest and social order.”

In March 2018, the government introduced a new lese majeste (insulting the monarchy) provision into Cambodia’s penal code, with a punishment of up to five years in prison and a $2,500 fine. Two months later, authorities arrested two people under the provision, who remained in detention at time of writing.

A series of repressive new laws and amendments were passed in 2018 that further restricted freedom of association. These included amendments to articles 34 and 42 of Cambodia’s Constitution to require that every Cambodian “defend the motherland” and empower the government to take action against political parties if they do not “place the country and nation’s interest first.” The repressive and controversial amendments to Cambodia’s Law on Political Parties, allowing for the arbitrary dissolution of political parties and the banning of party leaders without due process, remained in place.

The United States responded to attacks on the opposition and an increasingly repressive environment for elections by ending all electoral assistance and suspending other assistance programs amounting to $8.3 million. Ahead of the elections, the US State Department imposed new visa restrictions against Cambodian officials responsible for “anti-democratic” actions.

On June 12, 2018, the US Treasury Department imposed Global Magnitsky Act sanctions against the head of Hun Sen’s bodyguard unit, Hing Bun Hieng, for being the leader of an entity involved in serious human rights abuses. On July 25, US Congress passed the Cambodia Democracy Act to impose “sanctions on all members of Hun Sen’s inner circle for their role in undermining democracy in Cambodia and committing serious human rights violations.” The UN special rapporteur on Cambodia and the UN high commissioner for human rights also expressed concern about the elections.

After the dissolution of the CNRP, Sweden—Cambodia’s longest-standing Western donor—stopped new state-to-state development aid, except in the areas of education and research. The European Union and its member states, South Korea, Australia, and other democratic countries cut election assistance and/or did not send election observers. Several countries condemned the elections as falling far short of international standards.

In February, the EU’s 28 foreign ministers threatened targeted sanctions and the suspension of trade preferences in response to the government’s crackdown on rights. In July, the European Commission deployed a mission to Cambodia to assess the country’s compliance with its human rights obligations. In September, the European Parliament reiterated its strong concerns over the human rights situation, calling on the commission to report on the mission’s findings. EU Trade Commissioner Cecilia Malmström notified Cambodia in October that the EU was launching its procedure for withdrawal of the trade preferences.

Japan, which is competing with China for influence in Cambodia, maintained its $7.5 million electoral support. A week before the election, it decided not to deploy official election observers. In February, Japan said it would provide $168 million in development aid in 2018.

China, despite its own lack of competitive elections, sent election observers and praised the elections. China was the biggest aid donor of Cambodia in 2018. In June, China provided more than $100 million in military aid to Cambodia. Under China’s “One Belt, One Road” initiative, Cambodia has received about $5.3 billion in investment and loan agreements between 2013 and 2018. China is pledging another $7 billion in new projects. Cambodia’s public external debt was at $9.6 billion by 2017 and may rise to $17 billion by 2020.

In January 2018, China’s Foreign Ministry announced that bilateral trade would reach $6 billion by 2020. China has sought to expand its political influence and economic power in Cambodia amid Cambodia’s dwindling support from Western governments. Cambodia has supported China’s territorial claims to the Spratly Islands in Southeast Asia’s regional dispute over the South China Sea.