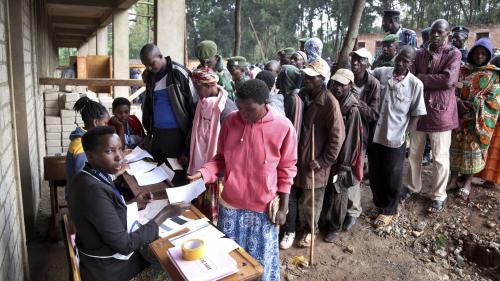 Burundi’s security services and members of the Imbonerakure, the ruling party youth league, carried out widespread human rights abuses throughout 2018, including summary executions, rapes, abductions, beatings, and intimidation of suspected political opponents. Many of the worst abuses occurred in the lead-up to a May 17 constitutional referendum, which enables President Pierre Nkurunziza to potentially remain in power until 2034.

The humanitarian situation remains dire; the country’s once vibrant civil society and media landscape has been decimated since the crisis began in April 2015, when Nkurunziza announced his bid for a disputed third term. On May 11, just before the referendum, unidentified assailants, suspected of entering Burundi from the Democratic Republic of Congo, launched one of the deadliest attacks in Burundi in recent years, killing 26 people, including 11 children, in Ruhagarika, Cibitoke Province.

A United Nations Human Rights Council-mandated commission of inquiry reported in September that serious violations, including crimes against humanity, continued in 2017 and 2018.

On September 27, 2018, Burundi’s National Security Council announced a three-month suspension of international nongovernmental organizations. As a result, the operations of around 130 international NGOs, some of them providing lifesaving assistance, were seriously hampered.

The Commission of Inquiry confirmed new cases in 2018 of summary execution, enforced disappearance, arbitrary arrest and detention, sexual violence, torture and other cruel, inhuman or degrading treatment. The commission concluded that the perpetrators of these crimes—the National Intelligence Services, the police, and the Imbonerakure—operate in “a climate of impunity perpetuated by the lack of an independent judiciary.” The commission for the first time implicated Nkurunziza directly in “recurring calls for hatred and violence.”

When announcing the referendum on December 12, 2017, President Pierre Nkurunziza warned that those who dared to “sabotage” the project to revise the constitution “by word or action” would be crossing a “red line.”  In the months leading up to the referendum, police, intelligence services, and members of the Imbonerakure killed, raped, abducted, beat, and intimidated suspected opponents of the ruling party, the National Council for the Defense of Democracy-Forces for the Defense of Democracy (Conseil national pour la défense de la démocratie-Forces de défense de la démocratie, CNDD-FDD). Beatings and intimidation of suspected opponents continued after the vote.

Political violence tied to the May referendum claimed at least 15 lives, according to Human Rights Watch research, but the actual number killed is likely much higher. Dozens of dead bodies were found across the country in suspicious circumstances. Many of them were never identified and the circumstances around the deaths never confirmed.

Numerous political opponents were arrested, intimidated, or held incommunicado in unknown locations, including members of the National Liberation Forces (Forces nationales de libération, FNL), the Movement for Solidarity and Democracy (Mouvement pour la solidarité et la démocratie, MSD), and other opposition parties. Some were accused of having told their members to vote against the referendum.

The Commission of Inquiry found that CNDD-FDD and Imbonerakure members “stepped up their efforts to recruit members from among the general public” before and during the referendum campaign, including through forced recruitment. The commission also found that Imbonerakure members can act freely due to their dependence “on the discretion of State power structures and on the impunity accorded by the latter.”

At time of writing, approximately 378,000 refugees lived outside Burundi, including in Tanzania, Rwanda, Uganda, and Congo. Following a peak of around 431,000 Burundian refugees in March, as of early October, about 40,000 refugees had returned to Burundi from Tanzania under a voluntary repatriation program involving Tanzania, Burundi, and the United Nations High Commissioner for Refugees (UNHCR). Some refugees said they had no choice but to return to Burundi after Tanzanian local authorities had banned them from trading inside the closed camps they had been living in and cash-strapped aid agencies had reduced daily food rations to one meal a day.

In April, around 2,500 Burundian refugees, most of whom are members of a religious sect known as the “Zebiya followers,” returned from Rwanda to Burundi. They had originally fled to Kamanyola, in eastern Congo’s South Kivu province in 2015. In September 2017, Congolese security forces used excessive force to quash a protest led by the Burundian refugees in Kamanyola, killing around 40 refugees and wounding more than 100 others. As conditions deteriorated further, those who survived the massacre fled to Rwanda in March. After several of their leaders were arrested in Rwanda, and because many refused certain procedures on religious grounds, including biometric registration, most of the refugees then returned to Burundi, where some may have faced persecution.

Civil Society and Freedom of Media

Space for civil society and media has become much narrower in 2018, and many civil society activists and independent journalists remained in exile. Many of those who remained in Burundi faced intimidation, detention, or trials on trumped up charges. Human rights activist Germain Rukuki, a member of Action by Christians for the Abolition of Torture (ACAT), was sentenced to 32 years in prison in April on charges of “rebellion,” “threatening state security,” “participation in an insurrectional movement,” and “attacks on the head of state.” In August, activist Nestor Nibitanga, an observer for the Association for the Protection of Human Rights and Detained Persons (APRODH), was sentenced to five years for “threatening state security.” The government closed ACAT and APRODH in October 2016, along with several other human rights groups.

In March, three members of Parole et Action pour le Réveil des Consciences et l’Évolution des Mentalités (PARCEM), were sentenced to 10 years in prison for having “prepared actions likely to disrupt security.” PARCEM is one of the few remaining independent NGOs operating in the country. The activists were arrested in 2017 while organizing a workshop on arbitrary arrests.

The National Communication Council (CNC) suspended the online readers’ forum of Burundi’s main independent newspaper Iwacu in April for three months, for “violation of professional standards.” In early May, the CNC suspended the British Broadcasting Corporation for six months for “violating press laws” and “unprofessional conduct” after inviting a leading Burundian human rights activist, Pierre Claver Mbonimpa, to its program on March 12. The CNC claimed Mbonimpa’s remarks were “inappropriate, exaggerated, non-verified and damaged the reputation of the head of state.” At the same time, the CNC banned the Voice of America (VOA), also for six months, for the technical reason that it was using a banned frequency. BBC and VOA remain off the air at time of writing.

Burundi punishes consensual same-sex sexual relations between adults with up to two years in prison under article 567 of the penal code. This violates the rights to privacy and freedom from discrimination.

In June, the government banned girls who are pregnant or have a child from attending school. About four weeks later, the government reversed the decision without giving a reason.

The new constitution, adopted during the May referendum, replaced the 2005 constitution, which came into force after the signing of the 2000 Arusha Peace Accords, which helped to end a civil war. The new constitution increased presidential terms from five to seven years, renewable only once, and reset the clock on terms already served, enabling Nkurunziza to potentially stand for two new seven-year terms, one in 2020 and another in 2027.

Beyond changing the law around term limits, the new constitution was designed to strengthen the CNDD-FDD’s grip by reducing the majority needed to adopt legislation. The changes could lead to a dismantling of the power sharing components that were central to the Arusha Accords, and put into question guarantees that the ethnic Tutsi minority hold some government posts.

The Inter-Burundi dialogue, which began in 2014 under the leadership of the East African Community (EAC), continued to stall, hampered by an apparent unwillingness among regional leaders to press Nkurunziza to make real concessions. The inter-Burundi dialogue’s Facilitator, former Tanzanian President Benjamin Mkapa, called for a fifth and final round of talks between the government and the political opposition. The consultations took place between October 24 and 29 in Arusha, Tanzania. Little was accomplished, as the Burundian government did not attend the session.

In February, the Sub-Committee on Accreditation of the Global Alliance of National Human Rights Institutions, which assesses the effectiveness and independence of national human rights institutions, downgraded Burundi’s National Independent Human Rights Commission from a status “A” to “B” for a lack of independence.

The International Criminal Court continued investigations into crimes committed in Burundi since 2015. The UN commission held an interactive dialogue at the UN General Assembly 73rd Session on October 24, 2018. In an August press statement, the UN Security Council urged Burundi “to take further steps to respect, protect and guarantee human rights and fundamental freedoms for all, in line with the country’s Constitution and its international obligations.”

The Human Rights Council renewed the commission of inquiry ’s mandate for another year, despite Burundi’s continued refusal to cooperate with the commission and declaring its members persona non-grata in September. In April, the government also revoked the visas of three UN experts tasked by the high commissioner for human rights to gather information on abuses to share with local judicial authorities, despite Burundi having endorsed the experts and their assignment in September 2017.

The Security Council continues to hold regular meetings on the situation in Burundi but has remained paralyzed on the matter, mostly because Burundi is not a priority due to other competing interests, such as the crisis in Syria and other conflicts.