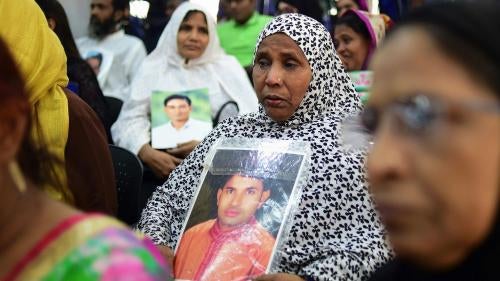 Ahead of national elections scheduled for end December 2018, Bangladesh authorities detained or jailed senior members of main opposition parties, lodged politically motivated trumped-up cases against thousands of opposition supporters, and violated international standards on freedom of speech by cracking down on media and civil society critical of government abuses.

Despite an international outcry, authorities detained photographer-activist Shahidul Alam for 107 days. Alam had criticized human rights violations in an interview with Al Jazeera television and on Facebook in August. Bangladesh also enacted an overly broad and vague law that affects various forms of speech, particularly through the use of social media and other internet-based devices.

April marked the five-year anniversary of the collapse of Rana Plaza garment factory, leading to the deaths of over 1,100 workers. The prime minister promised that reforms will continue to ensure the safety of workers but was resistant to continuing to receive external international oversight through the Bangladesh Accord and the Bangladesh Alliance, which were set up with the assistance of international brands following the collapse of Rana Plaza.

Bangladesh continued a harsh crackdown to suppress those that disagree or are critical of the ruling Awami League. These included members and supporters of the political opposition, journalists, prominent members of civil society, as well as students, and even school children.

The leader of the Bangladesh Nationalist Party, Khaleda Zia, was convicted and jailed in February, after the courts finally moved long-standing pending cases against her. Zia’s supporters said that the corruption cases against her were brought by the same military-backed government that had filed allegations against the current prime minister, Sheikh Hasina; however, after the Awami League came to office, all cases against Hasina were dropped, but those against Zia proceeded.

Thousands of opposition supporters, including senior leaders, faced trumped-up cases. Newspapers reported that even names of individuals who are dead or critically ill in the hospital were included in these arbitrary actions.

In July, university and school students launched a protest demanding road safety following the death of two students by a speeding bus. Eyewitnesses credibly alleged that members of the Awami League and their student wing had attacked the students with sticks and machetes. Authorities took no action against those carrying out the abuses, but instead detained the protesting students. Police also arrested scores on vague allegations of “instigating” violence, based on their comments on social media either supporting the protests or criticizing the crackdown on students.

Photojournalist Shahidul Alam, who was covering the protests, was detained in early August. He was arrested by members of the Detective Branch hours after he gave a media interview describing the violence he witnessed during the protests. He said he was beaten in custody. Other journalists covering the protests also reported being attacked. Several protesters faced secret detentions, in effect amounting to enforced disappearances. Alam was eventually released on bail in late November, although he continues to face charges against him.

In September, the government passed the Digital Security Act, designed to monitor all electronic communications. This new law was supposed to address abusive provisions in the Information and Communication Technology Act. However, the new law still retains similar provisions and contains new sections to criminalize free expression. Meanwhile, hundreds continued to face charges for their social media commentary.

Human rights groups remained under pressure, due to restrictions on accessing foreign funding. Journalists reported threats and intimidation to prevent any criticism of the government.

Impunity for RAB and other Security Forces

In May, the government announced a war on drugs, and within a short period of time, nearly 100 persons had been killed by the security forces. Sheikh Hasina also announced that an additional 10,000 suspects had been arrested. Despite allegations of violations, including an audio recording of an extrajudicial execution by members of the Rapid Action Battalion (RAB), authorities failed to investigate and prosecute those responsible.

Enforced disappearances and extrajudicial killings continued. Security forces persisted with a long-standing pattern of covering up unlawful killings, by claiming the deaths occurred during a gun-fight or in crossfire.

A year after a brutal crackdown by the Myanmar army, almost 1 million Rohingya refugees remained in camps in Bangladesh.

Humanitarian agencies, the government, and the refugees themselves, struggled to shore up the hastily built, severely overcrowded camps. The government obstructed certain infrastructure improvements, particularly in shelter and education, because it insisted the camps are temporary, and the solution to the refugee problem is return to Myanmar.

Vulnerable groups, such as people with disabilities and older people, are particularly at risk and have difficulty accessing basic services and humanitarian assistance.

The Bangladesh government, after failing to negotiate the safe return of the refugees to Myanmar, and in an attempt to resolve the overcrowded camp conditions, announced a plan to relocate 100,000 in the first phase to an island in the Bay of Bengal called Bhasan Char. The government hired external contractors to build embankments around the island, but there are serious concerns about risk of floods and tidal surges, particularly during the monsoon and cyclone seasons, as well as lack of livelihoods and freedom of movement for refugees who would be transferred there.

The Bangladesh High Court ordered that the two international initiatives on fire and building safety—the Bangladesh Accord on Fire and Building Safety and the Alliance for Bangladesh Worker Safety—should finish their work and hand over their operations to government authorities by November 2018. The government has yet to publicly report on all its fire and building safety inspections and progress in a manner comparable to the transparent reporting adopted by the Accord and the Alliance. The government increased workers’ minimum wage in the apparel industry, but workers continued to protest this as being inadequate.

Bangladesh continues to have one of the highest rates of child marriage in the world. In spite of the government’s stated pledge to end the practice by 2041, it has yet to make meaningful progress. A law remained on the books allowing girls to get married before the age of 18 under special circumstances.

Although the government took some steps in recent years, such as declaring legal recognition of a third gender category for hijras (sometimes referred to as transgender women), policy implementation on access to state benefits were weak, and sexual and gender minorities remained under constant pressure and threat.

Sexual and gender minorities fear for their safety, amid a climate of impunity for attacks on minorities by religious extremists, and feared that, if they were targeted, authorities would deny that they were targeted because of their sexual orientation or gender identity, rather than come to their defense.

The Bangladesh government ignored or dismissed numerous key recommendations, particularly around its crackdown on speech, and the increasing cases of enforced dis- appearances and killings during its Universal Periodic Review in May 2018.

After months of increasing interest for a visiting mission to Bangladesh and Myanmar, the Security Council traveled to both countries in April. In Bangladesh, council members visited refugee camps in Cox’s Bazar, where they assessed efforts to provide assistance for Rohingya refugees.

In July, Secretary-General Antonio Guterres and World Bank President Jim Yong Kim conducted a joint visit to Bangladesh. They met with government authorities in Dhaka and visited Cox’s Bazar. During and following his mission, the secretary-general expressed deep concern about the situation in the camps and urged donor countries to increase humanitarian assistance to Bangladesh host communities.

Relations with India was placed under strain when the Indian government announced plans to detain and deport those deemed to be illegal settlers from Bangladesh in Assam state. India failed to speak up against human rights violations in Bangladesh, including against the political opposition.

China resisted international efforts to hold the Myanmar military account- able for abuses against the Rohingya, and instead offered to mediate refugee repatriation.

Bangladesh authorities said those mediation attempts had failed, with Myanmar refusing to accept the Rohingya as citizens. China’s proposal on refugees seemed to minimize the engagement of various other international players in Myanmar.

International donors, including the European Union and its members states, focused mostly on conditions for the Rohingya refugees, and were restrained on publicly criticizing the Bangladesh authorities for human rights violations.

In April, during the yearly bilateral human rights consultations, the EU raised concerns over reports of extrajudicial killings and enforced disappearances, urged Bangladesh to abide by its labor legislation with international labor conventions, and underlined the urgency of addressing the issue of violence and harassments against trade unionists.

In September, the EU delegation and the missions of EU member states Switzerland and Norway reiterated concerns on provisions in the Digital Security Act, which can be used to unduly restrict freedom of expression and the freedom of media and undermine judicial procedural guarantees.

After the United States called for free and fair elections and criticized the crackdown on the student protests, alleged supporters of the ruling Awami League attacked the US ambassador’s convoy in Dhaka in early August, throwing stones at her car.

Since August 2017, the United States has provided more than US$389 million in humanitarian assistance to displaced people in and from Burma, primarily in Bangladesh.