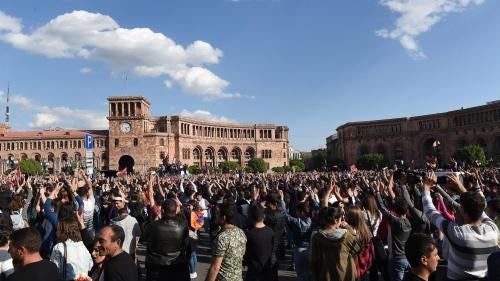 Former opposition leader Nikol Pashinyan became Armenia’s prime minister following weeks of popular protests in April and May 2018 against the outgoing president, Serzh Sargsyan. After serving the maximum two presidential terms, Sargsyan tried to hold onto power by securing his party’s backing so he would be elected as prime minister, before he stepped down amid the protests.

Pashinyan inherited a country plagued with corruption and myriad human rights problems, including lack of accountability for law enforcement abuses, domestic violence, violence and discrimination against lesbian, gay, bisexual, and transgender (LGBT) people, lack of access to quality education for children with disabilities, and institutionalization of people with psychosocial and intellectual disabilities. In October, Pashinyan stepped down to trigger snap parliamentary elections, set for December 2018.

Hayk Marutyan, the candidate from Pashinyan’s “My Step” alliance, won a landslide victory in Yerevan’s September mayoral election. The former mayor resigned amid strong public pressure in July. Previous elections had been marred by vote-buying and intimidation of public servants and private employees, another theme of the spring’s public protests. In September, the parliament adopted a package of bills, initiated by the government, which made buying and selling votes a criminal offense punishable by up to six years’ imprisonment.

Armenian authorities have a long record of using excessive force to break up largely peaceful protests, in some cases causing serious injury to protest participants and journalists. The April and May protests were mostly peaceful, but there were sporadic clashes between police and protesters, including on April 16 when police allegedly used stun grenades, leaving 46 people injured, including six policemen. Police also arbitrarily arrested hundreds of protest participants, including protest leader Pashinyan, based on accusations of participation in mass riots or holding rallies in violation of the established rules. They were all released within a few hours or days.

In a commendable move, the new authorities made progress in existing investigations into abuses that had been stalled for years. In June, they brought charges against a policeman accused of seriously ill-treating, in a court basement, four defendants in a trial concerning the violent takeover of a Yerevan police station in July 2016.

Authorities also revived the investigation into the March 2008 deadly clashes between protesters and security forces, that left 10 people dead, including two policemen. The previous investigation was one-sided, with 52 protesters sent to prison. Following the renewed investigation, authorities brought criminal charges against three former high-level officials, including ex-President Robert Kocharyan, and two commanders, Michael Harutyunyan and Yuri Khachaturov, accusing them of attempting to overthrow the constitutional order. A court initially remanded Kocharyan to pretrial detention and released him upon appeal, but he was re-arrested in December following another appeal by the authorities.

The government continues to transform some residential institutions for children into community centers and to support family-based care, but these programs do not include children with disabilities on an equal basis with other children. Existing legislation allows for deprivation of legal capacity of persons with psychosocial or intellectual disabilities and there are no supported decision-making mechanisms in place. As a result, some people with disabilities remain in institutions indefinitely.

As a follow up to the May 2017 United Nations (UN) Committee on the Rights of Persons with Disabilities concluding observations, authorities in May informed the committee that the 2018 state budget included funds to support 94 children in 90 foster families, but did not specify how many of those children have disabilities.

Authorities continue to implement their commitment to full inclusive education by 2025. Inclusive education involves children with and without disabilities studying together in community schools. Despite some progress, children with disabilities continue to face segregation and stigma, and do not always receive reasonable accommodation in schools to enable them to study on an equal basis with other children.

Domestic violence persists as a serious problem in Armenia. According to police, during the first five months of 2018 they recorded 864 incidents of violence against women, of which 223 were cases of domestic violence. Authorities brought charges against 31 persons for domestic violence through July, and courts convicted seven. Women’s rights activists believe domestic violence is widely underreported.

In January, a new law on violence in the family entered into force, providing a definition of domestic violence, but including notions of “strengthening traditional values” and “restoring family harmony” as key principles. Women’s rights activists raised concerns that those principles could be used to reinforce obsolete and problematic gender roles and stereotypes, and to pressure women to remain in abusive relationships.

In February, the government approved the action plan for the implementation of the law, and in June set up the Council on Prevention of Violence in the Family, the coordination body for policies on prevention of domestic violence. Authorities also drafted relevant decrees regulating requirements for shelter staff members, and for establishing a centralized record on domestic violence cases. At time of writing, the decrees had not been adopted.

Authorities still need to increase the number of shelter spaces and establish state-run shelters, and conduct campaigns to educate the public about the new law, how to file complaints, and the availability of services.

LGBT people face harassment, discrimination, and violence. Hateful and derogatory comments circulated on social media regarding the private visit to the country in May of musician Elton John and his husband.

In August, a crowd of about 30 people attacked nine LGBT activists in a southern Armenian village. The assailants ran after Hayk Hakobyan and his fellow activists, as they tried to escape, hitting, kicking, throwing stones, and shouting profanities, injuring six. Police questioned several of the attackers. At time of writing, no one had been charged.

Earlier in April, Hakobyan was the victim of another homophobic assault. He reported it, but authorities failed to effectively investigate.

The LGBT rights organization PINK Armenia documented physical attacks against at least 17 individuals based on sexual orientation or gender identity between January and August.

New Generation, a nongovernmental organization, had to cancel an LGBT Christian Groups’ conference planned in November, amid uproar by the public and government officials over the event.

Openly gay men fear for their physical security in the military, and some seek exemption from serving in the army. An exemption, however, requires a medical conclusion finding them “psychologically or mentally unfit” to serve. In Armenia, a finding of “psychological or mental disorder” could be an obstacle to employment or obtaining a driver’s license.

In April, Armenia’s parliament ratified the European Union-Armenia Comprehensive and Enhanced Partnership Agreement, signed in November 2017, triggering its provisional application as of June 1. The agreement aims to strengthen political dialogue, increase economic cooperation, and promote reforms, including on human rights and the rule of law.

In June, the EU published an assessment report on EU-Armenia relations in the framework of the European Neighbourhood Policy, welcoming some progress, particularly “improvements on the respect of  human rights and on checks and balances” as part of the 2015 constitutional reforms. The EU assessment also highlighted ill-treatment and police abuse, disproportionate use of force by the police against peaceful demonstrators, lack of a mechanism to protect LGBT rights, inequality and a gender gap, and overrepresentation of children with disabilities in residential institutions.

In his April report, the UN special rapporteur on right to health, Dainius Pūras, noted the need to provide legal protection against discrimination in healthcare services regardless of health status, sexual orientation, and gender identity. Among other things, he urged Armenian authorities to introduce comprehensive infrastructure for the healthcare of children with disabilities to support families, instead of large institutions for children. He also called on authorities to stop prioritizing investments in large psychiatric hospitals and residential institutions for people with mental health conditions, and increase investments in alternative mental health services.

In its May 2017 combined periodic report on Armenia, the United Nations Committee on the Elimination of Racial Discrimination welcomed the constitutional reform, and urged authorities to further amend the legislation to bring it in line with the Convention on Elimination of Racial Discrimination, including by introducing a new definition of hate crime in state law, and reviewing the quota system to allow for greater representation of minorities in parliament.

During a September visit, CoE Human Rights Commissioner Dunja Mijatovic called on the government to guarantee legal capacity, phase out institutions, and ensure quality, inclusive education for persons with disabilities.

A joint declaration following the Francophonie summit hosted by Armenia in October reiterated the member states’ commitments to the protection of human rights, rule of law, and gender equality.