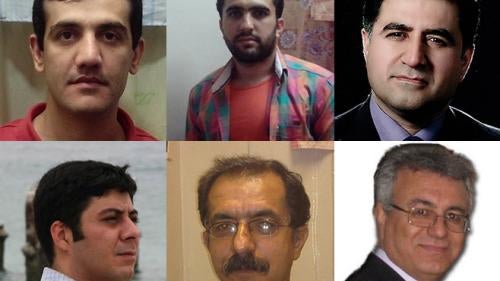 2014 saw no significant improvements in human rights in the first full year in office of President Hassan Rouhani. Repressive elements within the security and intelligence forces and the judiciary retained wide powers and continued to be the main perpetrators of rights abuses. Executions, especially for drug-related offenses, continued at a high rate. Security and intelligence forces arrested journalists, bloggers, and social media activists, and revolutionary courts handed down heavy sentences against them.

According to Iranian media sources, authorities executed at least 200 prisoners as of October 2014, but opposition sources said they carried out another 400 unannounced executions. Some executions were public.

Under Iranian law, many crimes are punishable by death, including some that do not involve violence such as “insulting the Prophet,” apostasy, same-sex relations, adultery, and drug-related offenses. Convicted drug offenders sentenced after flawed trials in revolutionary courts formed the majority of prisoners executed in 2014. On November 24, the Supreme Court upheld a criminal court ruling sentencing Soheil Arabi to death for Facebook posts he had written that were interpreted as “insulting the Prophet.”

According to unofficial sources, at least eight executed prisoners may have been child offenders aged under eighteen at the time of the murder and rape crimes for which they received death sentences. Dozens of child offenders reportedly remained on death row and at risk of execution. Iranian law allows capital punishment for persons who have reached the official age of puberty: nine for girls, fifteen for boys.

Authorities executed at least nine people in 2014 whom revolutionary courts had sentenced for moharebeh (“enmity against God”) on account of their alleged ties to armed opposition groups. In January, authorities executed two Iranian Arab activists, Hadi Rashedi and Hashem Shaabaninejad, for moharebah according to rights groups. On May 31, authorities executed Gholamreza Khosravi Savadjani, sentenced for his alleged ties to the outlawed Mojahedin-e Khalq opposition group. Dozens of others sentenced on terrorism-related charges, including many Iranian Kurds and Baluch, were on death row following trials rife with due process violations. On June 12, authorities informed the families of Ali Chabishat and Seyed Khaled Mousavi, Iranian-Arabs from Ahvaz in Khuzestan, that they had secretly executed and buried them, despite appeals by the United Nations.

The judiciary continued to allow the execution of prisoners convicted of moharebeh despite penal code changes requiring that it review and vacate death sentences unless there is proof that the alleged perpetrator resorted to the use of arms.

Security authorities continued to clamp down on free speech and dissent. In October, according to Reporters Without Borders, Iran held at least 48 journalists, bloggers, and social media activists in detention.

In May 2014, police arrested four young men and three women after a video showing them dancing to the popular song “Happy,” went viral on YouTube. Authorities released them to face trial on charges that included engaging in “illicit relations.” In May, a Tehran revolutionary court sentenced eight Facebook users to a total of 127 years in prison for allegedly posting messages deemed to insult government officials and “religious sanctities,” among other crimes.

Security officials arrested Saba Azarpeik, a journalist for the Etemad and Tejarat-e Farda media outlets, on May 28 and held her incommunicado for almost three months, then released her on bail, reportedly to face trial on vague charges of “propaganda against the state” and “dissemination of falsehoods.” On June 19, a judiciary official announced that 11 people convicted of “designing sites, websites, and creating content for media hostile to the regime” had received prison sentences up to 11 years. They appeared to be people associated with Narenji, a popular website, whom Revolutionary Guards had detained on December 3, 2013.

On July 22, unidentified agents arrested Washington Post correspondent, Jason Rezaian, his wife Yeganeh Salehi, also a journalist, and two unnamed people—a photojournalist and her spouse. At time of writing, authorities continued to detain Rezaian without charge and without allowing him access to a lawyer, but had released Salehi and the two others.

On August 7, 2014, an appeals court confirmed the manslaughter conviction of a police officer accused in connection with the November 6, 2012 death in custody of blogger Sattar Beheshti. The court imposed a three-year prison term, followed by two years of internal exile, and a flogging of 74 lashes.

Judiciary officials also shut down at least four newspapers apparently for breaching content-based restrictions. They ordered the closure of Aseman in February and the arrest of its managing editor for an article that described the Islamic qesas retribution laws as “inhumane.” Authorities allowed some newspapers to resume publication after bans, but they continued to block websites and jam foreign satellite broadcasts.

Scores of people held for their affiliation with banned opposition parties, labor unions, and student groups were in prison. The judiciary continued to target independent and unregistered trade unions. On May 1, police attacked and arrested at least 25 workers who were protesting poor wages and labor conditions outside the Labor Ministry and a Tehran bus terminal. Police took the workers to Evin Prison before releasing them. Several of them face charges related to illegal gathering.

Rouhani’s interim minister of science, Reza Faraji Dana, responsible for most of Iran’s universities, led efforts to reinstate professors and students barred between 2005 and 2012 for their peaceful activities. Dozens remained unable to continue their studies or teach, however, and in August the parliament voted to impeach the minister and refused to confirm several other Rouhani nominations for the post.

The authorities continued to imprison dozens of activists and human rights defenders, such as lawyers Mohammad Seifzadeh and Abdolfattah Soltani, on account of their peaceful or professional activities. In September, a court overturned an order that had banned Nasrin Sotoudeh from practicing law for 10 years following her release from prison in 2013, but on October 18 the Iranian Bar Association’s disciplinary committee told Sotoudeh that it had revoked her law license for 3 years because of her revolutionary court conviction on vague national security charges in 2011. On November 9, security officials summoned Narges Mohammadi, a rights defender, for questioning after she gave a speech criticizing government policies.

Prominent opposition figures Mir Hossein Mousavi, Zahra Rahnavard, and Mehdi Karroubi, held without charge or trial since February 2011, remained under house arrest. Prisoners, especially those sentenced on politically motivated charges, faced regular abuse by guards and were denied necessary medical treatment. In April, guards severely beat several dozen political prisoners in Ward 350 of Evin Prison and forced around 30 to pass between two rows of guards, who punched, kicked, and beat them with batons, causing some to sustain serious injuries, according to relatives of the victims. Officials later subjected at least 31 prisoners to prolonged solitary confinement and degrading treatment.

In 2014, authorities announced or implemented discriminatory policies, including restricting the employment of women in coffee shops, certain restaurants, and other public spaces and limiting access to family planning as part of official measures to boost Iran’s population.

On June 30, authorities arrested Ghoncheh Ghavami, 25, a dual Iranian-British national, and others who had participated in a peaceful protest against an official ban on women attending men’s volleyball matches in Tehran’s Azadi Stadium. Ghavami, who was initially detained at Evin prison, where authorities denied her access to a lawyer, was later tried and convicted on the charge of “propaganda against the state” in a closed trial. In September, authorities announced that Shahla Sherkat, editor of a new women’s magazine, was to appear before the press court for promoting un-Islamic ideas.

Iranian women face discrimination in many aspects of their lives, including personal status matters related to marriage, divorce, inheritance, and child custody. Regardless of her age, a woman cannot marry without the approval of her male guardian, and women generally cannot pass on their Iranian nationality to a foreign-born spouse or to their children. Child marriage, though not the norm, continues, as the law allows girls to marry at 13 and boys at age 15, and at younger ages if authorized by a judge.

The government denies freedom of religion to Baha’is, Iran’s largest non-Muslim religious minority, and discriminates against them. At least 136 Baha’is were held in Iran’s prisons as of May 2014. State authorities also desecrated Baha’i cemeteries, including one in Shiraz which the authorities began excavating in April. Security and intelligence forces also continued to target Christian converts from Islam, Persian-speaking Protestant and evangelical congregations, and members of the home church movement. Many faced charges such as “acting against the national security” and “propaganda against the state.”

Authorities restrict political participation and public sector employment of non-Shia Muslim minorities, including Sunnis, who account for about 10 percent of the population. They also prevent Sunnis from constructing their own mosques in Tehran and conducting separate Eid prayers. Government targeting of members of Sufi mystical orders, particularly members of the Nematollahi Gonabadi order, continued. In March, police beat and arrested several demonstrators who gathered outside a judiciary building in Tehran to seek the release of several detained Sufis.

The government restricted cultural as well as political activities among the country’s Azeri, Kurdish, Arab, and Baluch minorities. Afghan refugees and migrant workers, estimated at between 2.5 and 3 million, continued to face serious abuses.

The government continued to block access to Iran by the United Nations special rapporteur on the human rights situation in Iran, Ahmed Shaheed, and other UN rights bodies, but announced in November that they would allow two UN experts to visit the country in 2015. The special rapporteur and other UN officials criticized the “ongoing spike in executions” in Iran and urged the government to impose a moratorium.