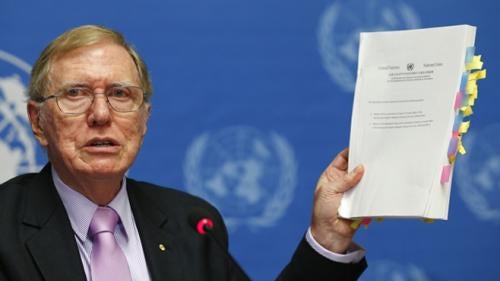 The human rights situation in the Democratic People’s Republic of Korea (DPRK or North Korea) has remained dire under the control of Kim Jong-Un. The government is controlled by a one-party monopoly and dynastic leadership that do not tolerate pluralism and systematically denies basic freedoms. Tight controls on North Korea’s border with China continued in 2014, further reducing the number of North Koreans able to flee and seek refuge in third countries.

On March 28, the HRC adopted a resolution supporting the COI’s findings and calling for accountability. In October, heavy pressure on North Korea at the UN General Assembly in New York and North Korea’s concern over the possibility of a referral to the International Criminal Court (ICC) prompted a first-ever meeting between North Korean diplomats and Marzuki Darusman, the HRC special rapporteur on human rights in North Korea.

On November 18, the third committee of the UN General Assembly, rejecting an amendment by Cuba that would have stripped accountability from the text, adopted the resolution by a 111 to 19 vote, with 55 states abstaining. The resolution endorsed the COI’s conclusions and called on the UN Security Council to consider referring North Korea’s leadership to the ICC for crimes against humanity committed against the people of North Korea.

Surprisingly, North Korea has ratified four key international human rights treaties and signed, but not yet ratified, another, and has a constitution that provides a number of rights protections on paper. But in practice, the government is among the most rights-repressing in the world. Political and civil rights are nonexistent since the government quashes all forms of disfavored expression and opinion and totally prohibits any organized political opposition, independent media, free trade unions, or civil society organizations. Religious freedom is systematically repressed.

North Koreans who seek to assert their rights are perceived to show insufficient reverence for supreme leader Kim Jong-Un or the ruling Korean Workers’ Party. Those who act in ways viewed as contrary to state interests face arbitrary arrest, torture, and ill-treatment, detention without trial, or trial by state-controlled courts. North Koreans also face severe penalties for possessing unauthorized videos of foreign TV programs and movies or communicating with persons outside the country.

The government also practices collective punishment for supposed anti-state offenses, effectively enslaving hundreds of thousands of citizens, including children, in prison camps and other detention facilities where they face deplorable conditions and forced labor.

People arrested in North Korea are routinely tortured by officials in the course of interrogations. Common forms of torture include kicking and slapping, beatings with iron rods or sticks, being forced to remain in stress positions for hours, sleep deprivation, and, for female detainees, sexual abuse and rape. For less serious crimes, suspects endure abuse until they can pay bribes for better treatment or release, while for more serious offenses, torture is used to extract confessions.

North Korea’s criminal code stipulates that the death penalty can be applied for vaguely defined offenses such as “crimes against the state” and “crimes against the people.” In 2007, North Korea amended its penal code to extend the death penalty to additional crimes, including non-violent offenses such as fraud and smuggling, as long as authorities determine the crime is “extremely serious.”

These camps are characterized by systematic abuses and often deadly conditions, including meager rations that lead to near-starvation, virtually no medical care, lack of proper housing and clothes, regular mistreatment including sexual assault and torture by guards, and executions. People held in the kwan-li-so face backbreaking forced labor at logging, mining, agricultural, and other worksites. These are characterized by exposure to harsh weather, rudimentary tools, and lack of safety equipment, all of which create a significant risk of accident. Death rates in these camps are reportedly extremely high.

While a North Korean UN diplomat publicly acknowledged for the first time in October 2014 that “reform through labor” centers exist in North Korea where “people are improved through their mentality and look on their wrongdoings,” Pyongyang still refuses to admit that kwan-li-so camps operate in the country.

All media and publications are state-controlled, and unauthorized access to non-state radio or TV broadcasts is punished. Internet and phone calls are limited within the country and are heavily censored. North Koreans are punished if found with mobile media such as computer flash drives or DVDs containing unauthorized videos of foreign films or TV dramas. Authorities also actively track, and seek to catch and punish, persons using Chinese mobile phones to make unauthorized calls to people outside North Korea.

The government uses threats of detention, forced labor, and public executions to generate fearful obedience, and imposes harsh restrictions on freedom of information and movement, both within the country and across its borders.

North Korea criminalizes leaving the country without state permission, and in some instances, state security services actively pursue North Koreans and seek to detain and forcibly return those who have fled the country. The ascent to power of Kim Jong-Un saw significantly expanded efforts to stop irregular crossings of North Koreans into China across the northern border.

The government has increased rotations of North Korean border guards and cracked down on guards who permit crossings in exchange for bribes. Increased patrols, fences, and use of security cameras on the Chinese side of the border have also made crossings more difficult. Consequently, fewer North Koreans have been able to make the arduous journey from the North Korean border through China to Laos and then into Thailand, from where most are sent to South Korea.

China continues to categorically label all North Koreans in China as “illegal” economic migrants and routinely repatriates them, despite its obligation to offer protection to refugees under the Refugee Convention of 1951 and its 1967 protocol, to which China is a state party.

The certainty of harsh punishment upon repatriation has led many in the international community to argue that all North Koreans fleeing into China should be considered refugees sur place. Beijing regularly restricts access of staff of the UN Refugee Agency (UNHCR) to North Koreans in China.

Former North Korean security officials who have defected told Human Rights Watch that North Koreans handed back by China face interrogation, torture, and consignment to political prisoner or forced labor camps. The severity of punishments depends on North Korean authorities’ assessments of what the returnee did while in China.

Those suspected of simple trading schemes involving non-controversial goods are usually sent to work in forced labor brigades (known as ro-dong-dan-ryeon-dae, literally labor training centers) or jip-kyul-so (collection centers), which are criminal penitentiaries where forced labor is required. Harsh and dangerous working conditions in those facilities purportedly result in significant numbers of people being injured or killed.

Those whom authorities suspect of religious or political activities abroad, or having contact with South Koreans, are often given lengthier terms in detention facilities known as kyo-hwa-so (correctional, reeducation centers) where detainees face forced labor, food and medicine shortages, and regular mistreatment by guards.

North Korean women fleeing their country are frequently trafficked into forced de facto marriages with Chinese men. Even if they have lived in China for years, these women are not entitled to legal residence and face possible arrest and repatriation. Many children of such unrecognized marriages lack legal identity or access to elementary education.

North Korea is one of the few nations in the world that still refuses to join the International Labor Organization. Workers are systematically denied freedom of association and the right to organize and collectively bargain. The only authorized trade union organization, the General Federation of Trade Unions of Korea, is controlled by the government.

In 2003, a special administrative industrial zone at the southern border, the Kaesung Industrial Complex (KIC), was developed in cooperation with South Korea. According to data from June 2014, the KIC hosts 125 South Korean companies employing 52,742 North Korean workers, supervised by 780 South Korean managers. A joint North-South Korea committee oversees the KIC, but the law governing working conditions there falls far short of international standards.

Pyongyang’s record of cooperation with UN human rights mechanisms remains among the worst in the world.

In its report released in February, the UN Commission of Inquiry (COI) found that “systematic, widespread, and gross human rights violations have been and are being committed by the Democratic People’s Republic of Korea, its institutions and officials. In many instances, the violations of human rights found by the commission constitute crimes against humanity. These are not mere excesses of the State; they are essential components of a political system that has moved far from the ideals on which it claims to be founded. The gravity, scale and nature of these violations reveal a State that does not have any parallel in the contemporary world.”

The COI recommended that the international community pursue accountability for those responsible, either through a UN Security Council referral of the situation to the ICC or UN establishment of an ad hoc tribunal.

The COI visited South Korea, Japan, Thailand, the United States, and the United Kingdom, but China declined to let the three COI commissioners visit to conduct investigations. North Korea also declined to participate in the inquiry, but in September released its own human rights report that declared that North Koreans “feel proud of the world’s most advantageous human rights system” and blamed the US, European Union, South Korea, and Japan for singling out North Korea for international condemnation.

In February 2014, the two Koreas organized reunions of more than 100 families separated during the Korean War, the first such reunions since 2010. An October 2014 visit to Seoul by Hwang Pyong So, vice-marshal of the Korean People’s Army, marked the highest-level talks between the two sides since 2007. Following the release of the COI report, however, North Korea conducted a series of missile launches and threatened to hold another nuclear test.

Japan continues to demand the return of 12 Japanese citizens whom North Korea abducted in the 1970s and 1980s. Some Japanese civil society groups insist the number of abductees is much higher. South Korea’s government has also stepped up its demands for the return of its abducted citizens, hundreds of whom were reportedly abducted during the decades after the Korean War.