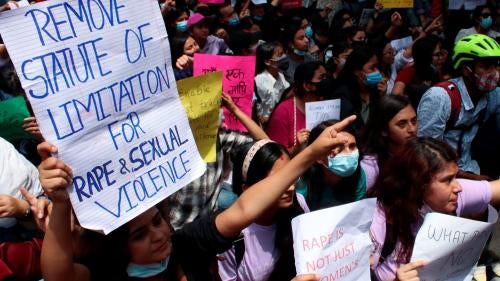 Following years of delay, the government drafted a law to advance the transitional justice process. Although the bill proposed some positive steps, victims and rights activists said that it hindered accountability for some serious crimes and does not meet Nepal’s international legal obligations. The bill was not adopted before parliament was dissolved in September, ahead of the elections.

Violations by the police and army, including cases of alleged extrajudicial killings and custodial deaths resulting from torture, were rarely investigated, and alleged perpetrators are almost never held to account.

In July, after public protests, parliament extended the statute of limitations for filing rape allegations from one year to two years for adult victims, and three years for children after they turn 18. Activists said that the statute of limitations remains among several obstacles to justice. Members of marginalized communities, including Dalits, are disproportionately affected by sexual violence and have particular difficulty accessing justice.

In March, breaking from its normal practice of abstaining from country resolutions, Nepal joined 141 members at the United Nations General Assembly to vote against the Russian invasion of Ukraine, but in October—as a member of the Human Rights Council—voted against a resolution to debate violations committed by the Chinese government in Xinjiang.

In November, Nepal held elections to the federal parliament and seven provincial assemblies for the second time since a federal constitution was promulgated in 2015, resulting in a hung parliament.

In August, the government tabled a bill to amend the 2014 Transitional Justice Law, which had been struck down by the Supreme Court in 2015. The failure of successive governments to amend the law is a key reason that there has been no progress in delivering justice and accountability for conflict-era violations since a 10-year Maoist insurgency ended in 2006. The bill was drafted following only brief consultations with victims’ groups and civil society.

Nepal has two transitional justice commissions, the Truth and Reconciliation Commission and the Commission of Investigation on Enforced Disappeared Persons. The two commissions have received over 60,000 complaints from victims but have failed to complete a single investigation.

The new bill had some positive aspects, including on the right to reparation and interim relief for victims who were left out of earlier programs. It would prevent amnesty for certain categories of violations and would establish a special court to hear cases recommended by the transitional justice commissions. It would also guarantee the right of the families of victims of enforced disappearance to their relative’s property. The bill would mandate the transitional justice commissions to study the root causes and impact of the conflict and recommend institutional reforms.

However, it also contained provisions that would hinder accountability, making it difficult or impossible to prosecute those responsible for serious violations including war crimes and crimes against humanity. Other provisions that violate international law include limitations on the right to appeal. It was not brought to a vote before parliament was dissolved on September 17.

Authorities failed to end impunity for ongoing abuses by the security forces. Deaths caused by excessive or unnecessary force while policing protests, as well as deaths in custody and allegations of torture, are rarely if ever credibly investigated, nor are perpetrators brought to justice.

On May 18, a 20-year-old Dalit man, Sundar Harijan, died in Rolpa jail in western Nepal. According to authorities, his death was a suicide. Harijan had been convicted of theft of mobile phones while still a minor but was sent to an adult jail. He had been due for release in 2020 but was transferred to Rolpa, where at the time of his death he was serving the sentence of another man, convicted of offences related to organized crime, who had been released in his place. An initial government inquiry led by a committee of prison staff absolved all officials. A subsequent Home Ministry investigation, part of which was obtained by Human Rights Watch, implicated prison officials in swapping the two men’s identities and indicated that there may be suspicious circumstances in Harijan’s death. However, the report was not published, and no action was announced.

On June 6, an 18-year-old woman, Nabina Tharu, in Bardiya district was killed when police used tear gas and live ammunition against villagers who had blocked a highway to demand the government do more to protect them from wild animals from a nearby national park. The government responded by appointing an investigative committee, composed of police and officials from the Department of National Parks, and no action is known to have followed.

A series of rape allegations led to protests and calls to address widespread sexual violence in Nepal. Official statistics show that the number of recorded rapes had risen in recent years. The victims disproportionately belong to marginalized social groups, including Dalits.

In June, hundreds of protesters gathered outside the prime minister’s office and elsewhere around the country after a 24-year-old woman used social media to describe how she had been drugged, raped, filmed, and then blackmailed eight years earlier. Nepal’s rape law contained a statute of limitations that prevented allegations over one year old from being filed with police. Parliament’s decision to extend the statute of limitations to either two or three years, depending on the age of the victim, still denies access to justice in countless cases.

Victims of conflict-related sexual violence perpetrated during Nepal’s 1996-2006 civil war are among those affected by the statute of limitations, which is not addressed by the new transitional justice bill. No perpetrators have been brought to justice. In May, the government announced that it would provide interim relief, but the program has not yet been designed or implemented.

A new citizenship act was passed by parliament in September, but President Bidya Bhandari refused to endorse it. If it becomes the law, the act could provide citizenship documents to thousands of people who were previously excluded. However, it still contains provisions that discriminate against women by making it harder for them to pass Nepali citizenship to their children than for men.

In May, Human Rights Watch found that Nepal’s Education Ministry had violated children’s right to privacy and other rights through the education technology (EdTech) products it had authorized for children’s education during the pandemic. One of these products, YouTube, collected and transmitted children’s personal data to the advertising arm of its parent company, enabling both to track and target children across the internet for advertising purposes.

Nepal has a mixed record on lesbian, gay, bisexual, and transgender rights. In some ways, its legal progress has been exemplary for the region, but implementation has proven inconsistent. In 2007, the Supreme Court called for legal recognition of transgender people based solely on their self-identification, but some authorities continue to demand proof of surgeries. The court also mandated a study on equal marriage rights for same-sex couples, but the 2018 criminal code only recognizes marriages between men and women. In recent years LGBT rights activists have filed a series of writ petitions at the Supreme Court challenging the government’s failure to uphold the rights of transgender people in practice, but the cases have all faced delays at the court.

Nepal is a participant in the Chinese government’s “Belt and Road Initiative,” although there have been delays in implementing any of the proposed projects. Nepal continues to restrict free assembly and expression rights of its Tibetan community under pressure from Chinese authorities.

There was controversy over Nepal’s decision to join a United States development program, the Millennium Challenge Corporation, which was seen by some as harmful to the country’s relationship with China.

Nepal’s donors, including European bilateral donors and UN agencies, continued to fund programs to support respect for human rights, police reform, access to justice, and respect for the rule of law, but were hesitant to press the government to advance transitional justice or end impunity for abuses by security forces.