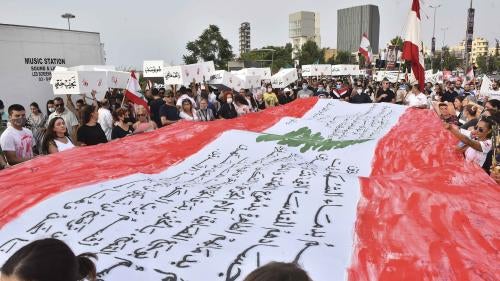 Lebanon entered the fourth year of a crippling economic crisis that has had disastrous consequences for rights and pushed over 80 percent of the population into poverty. Marginalized communities, including refugees, people with disabilities, children, older people, migrant workers, and LGBT people, have been disproportionately impacted. The crisis has had a devastating impact on the provision of public services, and in particular education, security, and health.

The Lebanese government and the International Monetary Fund reached a staff-level agreement for a program worth about US$3 billion over 46 months, contingent on key reforms that the political establishment has been stalling and obstructing.

In May, Lebanon held the first parliamentary elections since the October 2019 mass protests, which were marked by serious violations, including vote buying, violence and incitement, and abuse of power by political parties. Lebanon’s established political parties failed to make any public commitments to strengthen human rights’ protections. While 13 independent reformist candidates won seats, the election did not result in any meaningful shift in the political status quo.

Lebanon’s president and prime minister failed to agree on a new government since the outgoing cabinet’s mandate expired after the elections in May. Michel Aoun’s presidential term came to an end on October 31, but parliamentarians have yet to elect a new president.

The political establishment continued to obstruct the domestic investigation into the Beirut blast in August 2020, which killed more than 220 people and injured more than 7,000.

Decades of corruption and mismanagement in the electricity sector have led to its unraveling, with the state unable to provide more than two to three hours of electricity per day.

More than two years have passed since the catastrophic explosion in Beirut’s port on August 4, 2020, which also devastated half the capital and caused extensive property damage, yet no one has been held accountable.

Human Rights Watch’s review of hundreds of pages of official documents strongly suggests that some government officials were aware that the presence of ammonium nitrate in the port could result in a fatal disaster and tacitly accepted the risk to human life. This amounts to a violation of the right to life under international human rights law.

Yet, the political establishment has continued to obstruct and delay the domestic investigation. Politicians implicated in the explosion have filed over 25 requests to dismiss the chief investigator, Judge Tarek Bitar, and other judges involved in the case, resulting in multiple suspensions of the probe. The latest series of legal challenges filed against Judge Bitar have resulted in the suspension of the investigation since December 23, 2021.

In September, the justice minister and Higher Judicial Council agreed to nominate an alternate judge to “work on urgent and necessary matters” in the case, in a move that legal experts and judges have claimed is illegal.

Families of the victims, rights groups, and UN human rights experts have called for a UN Human Rights Council-mandated international, independent fact-finding mission into the explosion. However, no country has yet put forward such a resolution amid claims that they are waiting for France’s “green light.”

The Beirut blast case has clearly illustrated the Lebanese judiciary’s lack of independence and susceptibility to political interference. A draft law that aims to bolster the judiciary’s independence has been stalled in parliament since 2018, and the amendments that parliamentarians have made to the draft weaken many of its provisions.

In addition, Human Rights Watch found multiple failures, gross negligence, and procedural violations in four politically sensitive murder investigations in the past two years, including the assassination of prominent intellectual and Hezbollah critic Lokman Slim, reflecting that generous donor funding and training to Lebanon’s security forces and judiciary have not resulted in the rule of law.

According to the World Bank, the Lebanese crisis ranks among the “most severe crises episodes globally since the mid-nineteenth century,” and is the product of three decades of deliberate, reckless fiscal and monetary policy.

The currency has lost more than 95 percent of its pre-crisis value. This rapid devaluation, as well as supply-chain bottlenecks and fuel shortages have caused food prices to increase dramatically by 483 percent in January 2022 compared to the year before, and remaining high at 332 percent as of June 2022. As the Central Bank ran out of foreign reserves and lifted subsidies on the import of most vital goods, prices for electricity, water, and gas skyrocketed, increasing by 595 percent between June 2021 and June 2022. The price hikes turned utilities essential for business, health, and food into a luxury many people can afford only in limited quantities, if at all.

A nationally representative survey conducted by Human Rights Watch between November 2021 and January 2022 found that the median household reported a monthly income of just US$122. Seventy percent of households said they had difficulty making ends meet or were always behind on basic expenses, and 22 percent said that they sometimes or often did not have enough to eat in the past month.

While the crisis has impacted most people, the special rapporteur on extreme poverty found that women, children, migrant workers, Syrian and Palestinian refugees, and people with disabilities are particularly affected.

The crisis has had a devastating impact on the provision of public services. Schools have been struggling to operate amid resignations and strikes by teachers, electricity and internet cuts, and inflation. Public schools for hundreds of thousands of Lebanese and Syrian students have largely been closed for the last three years.

The healthcare sector is crumbling amid the migration of thousands of doctors and nurses from Lebanon, a shortage in medicines and medical supplies, and electricity cuts. The National Social Security Fund (NSSF), the largest employment-based provider of social services, is almost bankrupt and has not been reimbursing subscribers for their medical bills.

Despite increased support from donor states, Lebanese army soldiers, whose real wages have fallen from $900 to less than $50 a month, have received minimal pay increases and have had to take on extra jobs or quit. Within Lebanon’s Internal Security Forces, desertions, inability to reach duty stations due to fuel costs, and the need to reduce shifts to allow members to do other work, has reduced their ability to meet security needs.

Lebanon’s social protection system suffers from large coverage gaps and is chronically under-funded. Since the financial crisis, Lebanon has only introduced one new social assistance program, the Emergency Social Safety Net Project (ESSN), financed by the World Bank, to provide cash transfers to 150,000 households during 2022.

As the crisis deepened, many have resorted to dangerous migration routes towards Europe by sea. In April, a boat carrying around 80 Lebanese, Syrians, and Palestinians sank off the coast of Tripoli following its interception by the Lebanese army navy. Only 48 survivors were rescued.

Decades of corruption and mismanagement have crippled the electricity sector, with the state unable to provide more than two to three hours of electricity daily. While widespread blackouts affect everyone living in Lebanon, the crisis has exacerbated inequality in the country.

A Human Rights Watch survey found that the average household had generator bills that accounted for 44 percent of monthly income. The disparities between income levels are huge. For those in the bottom quintile who accessed a generator, their generator bills consumed 88 percent of their monthly income, on average, compared to 21 percent for the top quintile.

The lack of reliable and continuous electricity has impacted people’s right to electricity, an adequate standard of living, including food, medical care and water, and access to education, health, and livelihoods.

Despite parliament passing an anti-torture law in 2017, torture by security forces persists, judicial authorities continue to ignore the law’s provisions, and accountability for torture remains elusive.

In September, a Syrian refugee died in the custody of State Security as a result of torture. Several officers were arrested and are being tried in military courts, which lack independence.

Torture complaints filed by protesters in 2020 have not moved forward in the courts.

In 2019, Lebanon’s Council of Ministers appointed the five members of the national preventative mechanism against torture, but it has still not allocated funding for the mechanism.

In October 2021, members of the Lebanese army used unlawful force during a demonstration that Hezbollah and its allies called for to demand the removal of the judge leading the Beirut Blast investigation. Although the army admitted that an officer who used live fire in contravention to orders was under investigation, there has not yet been a verdict in the case.

The broad jurisdiction of the military courts is particularly used to silence and punish any peaceful dissent or criticism of the security agencies. In June 2022, Shaden Fakih, a well-known comedian, was convicted by the military court for allegedly tarnishing the reputation of the Internal Security Forces after she posted a skit on her Instagram page.

A growing number of femicide and domestic violence cases have underscored the need for a stronger implementation of Lebanon’s family violence law.

Tens of thousands migrant domestic workers, primarily from Africa and Southeast Asia, reside in Lebanon and their status is regulated by a restrictive and abusive regime of laws, regulations, and customary practices known as the kafala (sponsorship) system.

Attempts to dismantle the kafala system have been blocked, including by recruitment agencies, many of whom are accused of subjecting workers to abuse, forced labour, and human trafficking.

Article 534 of the penal code punishes “any sexual intercourse contrary to the order of nature” with up to one year in prison, but a district court of appeal ruled in 2018 that consensual same-sex conduct is not unlawful.

Lebanon hosts nearly 900,000 registered Syrian refugees, and the government estimates another 500,000 live in the country informally. Only 16 percent of Syrian refugees have legal residency, making most of them vulnerable to harassment, arrest, detention, and deportation. It is estimated that nine out of ten Syrian refugees live in extreme poverty.

Lebanese authorities are making plans to return refugees, even though Syrians who return face grave abuses and persecution at the hands of the Syrian government and affiliated militias.

In addition, there are approximately 174,000 Palestinian refugees living in Lebanon, where they continue to face restrictions, including on their right to work and own property.

Legacy of Past Wars and Conflicts

The independent national commission established in 2020 to investigate the fate of the estimated 17,000 Lebanese kidnapped or disappeared during the country’s civil war from 1975 to 1990 has yet to be allocated a budget and headquarters to operate from.

In March, the Appeals Chamber of the Special Tribunal for Lebanon reversed the acquittal of Hezbollah agents Hassan Merhi and Hussein Oneissi, convicting them in absentia of being co-perpetrators in the assassination of former Lebanese Prime Minister Rafik al-Hariri in 2005.

Syria, Iran, Saudi Arabia, and other regional powers exert their influence in Lebanon through local political allies and proxies.

Lebanon’s maritime border dispute with Israel escalated over the summer after a ship began setting up an Israeli drilling platform in the Karish field, a disputed area rich in natural gas and oil. On October 11, Lebanon and Israel reached a historic agreement demarcating the disputed maritime border after years of US-mediated negotiations.

In July, the European Union extended its targeted sanctions framework aimed at targeting those hampering the formation of a government or reform efforts. At time of writing, no individual or entity had been sanctioned.