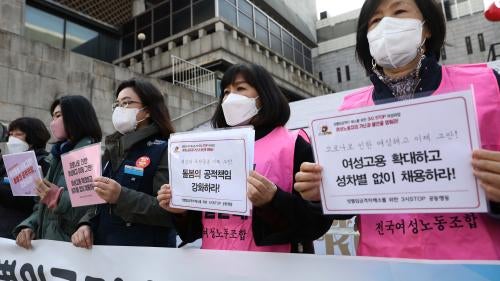 Discrimination against women is pervasive, as well as discrimination against lesbian, gay, bisexual, and transgender (LGBT) people, racial and ethnic minorities, and foreign migrants and refugees. The government also retains draconian criminal defamation laws and sweeping intelligence and national security laws that chill speech critical of the government and corporations.

In 2021, the South Korean government implemented public health measures to limit the spread of Covid-19, but some of its policy responses and implementation raised privacy rights concerns. While schools remained partially or fully open for much of the year, closures due to Covid-19 still affected over 10 million children. 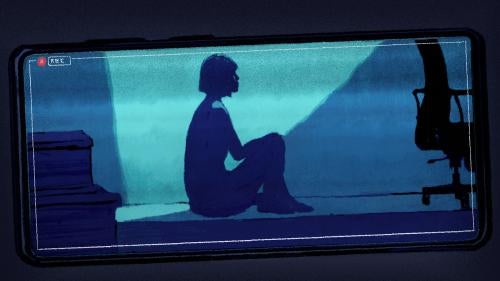 Discrimination against women and girls is widespread in South Korea. The gender pay gap, at 31 percent, is the widest among countries that belong to the Organisation for Economic Co-operation and Development (OECD). South Korea has been consistently ranked by The Economist as having the worst working environment for women among the 29 advanced economies it analyzes.

South Korea’s #MeToo movement gained some ground in the past two years, although it also faced backlash. In May, “men’s rights” groups targeted several South Korean retailers for using “pinching hand” signs in their ads, which the men claimed was similar to the logo of Megalia, a controversial online feminist community known for ridiculing men that was shut down in 2017. Following threats of boycotts, the GS25 convenience store chain apologized for hurting men’s feelings, disciplined employees, and took down an ad campaign. In June, Lee Jun-seok, a politician who advocates for “men’s rights” and claims that men in South Korea are targets of reverse discrimination, was elected leader of the main opposition conservative People Power Party.

The government continues to struggle to address rampant problems with online gender-based crimes, including widespread internet posting of sexual images of women and girls without their consent. In November 2020, Cho Joo-bin, one of the operators of an infamous network of chat rooms on the Telegram messaging app—where users were viewing, sharing, and trading non-consensual images of dozens of women and girls, including of acts of sexual violence obtained through coercion and blackmail—was sentenced to 40 years in prison in the so-called “Nth Room” case. On April 8, Moon Hyeong-wook, who opened the first chat rooms of the network in 2015, was sentenced to 34 years in prison for forcing 21 young women, including girls, into making sexually explicit videos and sharing them. The police identified approximately 1,100 women and girls who were victims of this network.

The LGBT rights movement in South Korea is growing but continues to face hostility and severe discrimination, especially in the armed forces. In October, a South Korean court ruled that the military unlawfully discriminated against Byun Hee-su, the country’s first openly transgender soldier, when it discharged her after she underwent a gender affirming surgery in 2019. The court ordered her reinstatement, but Byun died by suicide in March. The Constitutional Court is also currently reviewing the 1962 Military Criminal Act, which punishes sexual acts between soldiers with up to two years in prison under a “disgraceful conduct” clause, regardless of consent.

Activists and progressive legislators have actively advocated for the National Assembly to develop and pass a broad-based national anti-discrimination law protecting LGBT persons as well as women, children, people with disabilities, older people, and foreigners. But the government did not make meaningful progress on such a law, citing a vocal Christian conservative group’s anti-LGBT opposition.

Although South Korea has a relatively free press and lively civil society, the South Korean government continues to use draconian criminal defamation laws and sweeping intelligence and national security laws to restrict speech. Implementation of these laws creates a chilling effect that limits critical scrutiny of the government as well as corporations.

In December 2020, the South Korean government amended the National Intelligence Service Act using broad, vague language and authorizing the authorities to continue collecting information under the abusive and outdated National Security Law. The law criminalizes dissemination of anything that the government classifies as North Korean “propaganda,” as well as creating, joining, praising, or inducing others to join any political association considered an “anti-government organization,” a term not clearly defined in law.

In the same month, it adopted an amendment to the development of the Inter-Korean Relations Act, widely known as the anti-leaflet law, which imposes strict limitations on North Korean escapees and civil society organizations that work to send information and ideas from South Korea to the North Korean people. The law bans sending “leaflets, articles (including advertisements, printed matters, auxiliary storage devices, etc.), money or other financial benefits” through the country’s northern border and includes sentences of up to three years in prison or fines of up to 30 million won (US$25,000), which violate the principle of proportionality in punishments.

The special rapporteurs on freedom of expression, peaceful assembly, human rights defenders, and on the situation of human rights in North Korea, raised concerns regarding its vague wording, its possible disproportionate penalization of some forms of political expression and legitimate activities of some civil society members, and the effects it may have on access to information inside North Korea.

In September, the South Korean government backed down in the face of serious criticism and shelved amendments to a law tackling “false reporting” that prompted concerns about repression of media freedom. As the special rapporteur on the right of freedom of expression raised, the proposed amendments to the Press Arbitration Law would have imposed disproportionate sanctions for vaguely defined “false and manipulated” reporting. Criminal defamation laws already have a chilling effect on media reporting in South Korea, as they allow for up to seven years’ imprisonment and a fine, and truth is not a defense if the court finds what was said or written was not in the public interest.

South Korea joined the International Labour Organization (ILO) in 1991 but has only ratified four of the ILO’s eight core conventions. On July 7, the cabinet approved the Labor Ministry’s motion for parliamentary ratification of three ILO conventions on freedom of association, the right to organize and collectively bargain, and the prohibition of forced labor.

On September 2, the South Korean government raided the Korean Confederation of Trade Unions (KCTU) headquarters and arrested its president, Yang Kyung-soo, for organizing rallies between May and July calling on the government to adopt policies and programs to address economic inequalities deepened by the pandemic. The government had banned the rallies, citing Covid-19 public health measures. Police accused Yang of breaking the Assembly and Demonstration Act and the Infectious Disease Control and Prevention Act, as well as disrupting traffic. The union claimed that a major rally on July 3 drew about 8,000 participants, but all wore masks and followed government guidelines for social distancing.