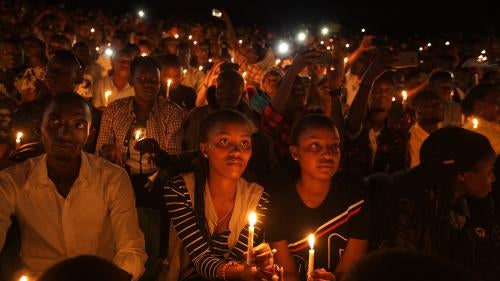 The ruling Rwandan Patriotic Front (RPF) continued to exert total control over political space in Rwanda in 2019. President Paul Kagame and other senior government officials, regularly threatened those who criticize the government or the RPF. Several opposition members and one journalist disappeared or were found dead in mysterious circumstances. Although the Rwanda Investigation Bureau (RIB) said they launched investigations into the cases, they rarely shared their findings. In October, security forces reportedly killed 19 people alleged to have been involved in an attack in Musanze District.

Arbitrary detention, ill-treatment, and torture in official and unofficial detention facilities continued, according to credible sources. Human Rights Watch continued to document the illegal detention and ill-treatment of street children in Kigali.

In 2019, three members of the unregistered Forces Démocratiques Unifiées (FDU)-Inkingi opposition party were reported missing or found dead. In September, Syldio Dusabumuremyi, the party’s national coordinator was stabbed to death. At the time, the RIB announced it had two men in custody. Eugène Ndereyimana, also a member of FDU-Inkingi, was reported missing on July 15, after he failed to arrive for a meeting in Nyagatare, in Rwanda’s Eastern Province.

Anselme Mutuyimana, an assistant to FDU-Inkingi’s then-leader, Victoire Ingabire, was found dead in March with signs of strangulation. The RIB said it had launched investigations into the cases.

Boniface Twagirimana, the party’s deputy leader, who “disappeared” from his prison cell in Mpanga, southern Rwanda, in October 2018 was missing at time of writing.

In November, Victoire Ingabire announced the creation of a new party, Development and Liberty for All (Développement et Liberté pour tous or Dalfa Umurinzi), and told media the party would campaign to open political space and would focus on development.

State interference and intimidation have forced many civil society actors and journalists to stop working on sensitive political or human rights issues. Most print and broadcast media continued to be heavily dominated by pro-government views. Independent civil society organizations are very weak, and few document and expose human rights violations by state agents.

Constantin Tuyishimire, a journalist with TV1 Rwanda who covers northern Rwanda, was reported missing in July while he was supposed to be on a reporting trip to Gicumbi District. Authorities said they believed he had probably fled to Uganda due to unpaid debts, although people close to him could not confirm this.

The BBC Kinyarwanda service remained suspended, as it has been since 2014.

Rwanda is one of the only countries in East Africa that does not criminalize consensual same-sex relations. When gospel singer Albert Nabonibo came out as gay in August 2019, the then-foreign affairs minister publicly expressed support for him.

In September, South Africa’s National Prosecution Authority issued arrest warrants for two Rwandans accused of murdering Rwandan critic Col. Patrick Karegeya, who was found dead in his hotel room in Johannesburg on January 1, 2014. During an inquest into Karegeya’s murder, which began on January 16, 2019 in Johannesburg, a head magistrate asked why no arrests had been made even though the names and passport numbers of four suspects were known to police. South Africa’s special investigative unit said in written testimony that Karegeya’s murder and attacks on Rwanda’s former army chief of staff Gen. Kayumba Nyamwasa “were directly linked to the involvement of the Rwandan government.”

In October, a Financial Times investigation revealed that Israeli software developed by the NSO Group was used to spy on political dissidents and critics living abroad. The spyware targeted individuals through WhatsApp calls and allowed hackers to access personal data on the phone, such as messages and location.

Although lack of access to the country and detention centers to conduct research posed challenges to documenting violations, reports continued that prison guards used threats, beatings, and intimidation against detainees, including to extract confessions.

The detention continued of street vendors, sex workers, street children, and other poor people at Gikondo transit center, an unofficial detention center where individuals exhibiting “deviant behaviours” are sent as part of a rehabilitation process.

Detention at Gikondo is arbitrary and conditions are harsh and inhumane. Police or others, acting on the orders or with police assent, often ill-treat and beat detainees. Children are detained in deplorable and degrading conditions. Authorities often do not provide basic necessities, such as a regular supply and reasonable quantities of food and clean water for detainees, who are often held in cramped conditions. Detainees sometimes sleep on the bare floor.

The Rwandan Parliament adopted a law on rehabilitation services in March 2017. An April 2018 ministerial order on transit centers established that a person who “exhibits deviant behaviors” can be admitted, and defines these as behavior such as prostitution, drug use, begging, vagrancy, informal street vending, or any other deviant behavior that is harmful to the public.

In February, the National Commission for Human Rights published the findings of its investigation into the February 2018 killing of at least 12 people, when police fired live ammunition on refugees from the Democratic Republic of Congo. They were protesting outside the United Nations High Commissioner for Refugees (UNHCR) office in Karongi District, Western Province.

The report concluded that the police “had used all peaceful and less harmful means to contain the situation” and that eventually “live ammunition was used as the last resort after [a] violent and organized attack was launched by a group of demonstrators against police.”  The commission’s report contradicted independent accounts, including by Human Rights Watch, that Rwandan police used excessive force.

Rwandan police arrested over 60 refugees between February and May 2018 and charged them with participating in illegal demonstrations, violence against public authorities, rebellion, and disobeying law enforcement. Some were also charged with “spreading false information with intent to create a hostile international opinion against the Rwandan state.” Human Rights Watch learned that between October 2018 and September 2019, 35 refugees were sentenced to between 3 months to 15 years; 22 were released, and at least 4 others were still on trial at time of writing.

Most of the refugees, ethnic Banyamulenge from neighboring Democratic Republic of Congo, have been in Rwanda since 1996.

The Government of Rwanda, UNHCR, and the African Union signed an agreement in September to set up a transit mechanism to evacuate refugees out of Libya. Rwanda has agreed to receive and provide protection to refugees and asylum-seekers who are currently being held in detention centres in Libya, where they face abuses and insecurity. Under the agreement, they will be transferred to Rwanda on a voluntary basis. In September and October, 189 people, predominantly from the Horn of Africa, were evacuated to Rwanda.  UNHCR has committed to pursuing solutions for the evacuees.

Twenty-five years after the 1994 genocide, a significant number of people responsible for the genocide, including former high-level government officials and other key figures, have been brought to justice.

In recent years, the Rwandan government has requested extradition treaties with dozens of countries in an attempt to try remaining genocide suspects in Rwanda. In 2018, it ratified treaties with Ethiopia, Malawi, and Zambia. And on January 28, genocide-suspect Vincent Murekezi was extradited to Rwanda from Malawi “courtesy of a prisoner exchange agreement” where he had been convicted of fraud-related offenses.

In March 2019, Dutch police arrested a Rwandan man suspected of being involved in the genocide, after a request for extradition by Rwandan authorities. According to a local media report published in August 2019, Rwandan judicial authorities have sent out over 1,000 extradition requests for genocide suspects.

In November, the trial began in a Belgian court of genocide-suspect Fabien Neretse, charged with 13 counts of murder and accused of causing an “incalculable” number of additional deaths.

The European Union’s 2018 human rights report, published in May 2019, concluded that there were “continued reports of serious violations of civil and political rights.” In a France 24 interview in June,  President Kagame dismissed the report as “ridiculous,” brushing aside questions about critics being killed, physically attacked, jailed, silenced, or forced into exile ahead of  the 2017 presidential election.

Rwanda remains a prominent player on the international stage. Former Foreign Affairs Minister Louise Mushikiwabo is the current secretary general of the International Organization of La Francophonie, an international institution which promotes the spread of French language and values. In February, Kagame was elected president of the East African Community, a six-nation intergovernmental organization in the Great Lakes region. Rwanda is set to host the Commonwealth Heads of Government Meeting in June 2020.