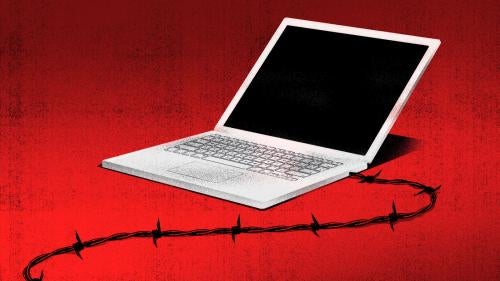 Shutting Down the Internet to Shut Up Critics

In 2020 you should be watching for… who’s trying to shut down the Internet.

From Caracas to Khartoum, protesters are leveraging the internet to organize online and stand up for their rights offline. In response, in the past year governments in Bangladesh, the Democratic Republic of Congo, Egypt, India, Indonesia, Iran, Iraq, Sudan, Myanmar and Zimbabwe shut down the internet in all or some parts of their countries—perhaps with the hope that doing so would shut off their problems.

Governments are increasingly resorting to shutdowns in times of crisis, arguing they are necessary for public safety or curbing the spread of misinformation. But such sweeping measures are more like collective punishment than a tactical response. When the internet is off, people’s ability to express themselves freely is limited, the economy suffers, journalists struggle to upload photos and videos documenting government overreach and abuse, students are cut off from their lessons, taxes can’t be paid on time, and those needing health care cannot get consistent access.

While you might think authoritarian regimes are the ones turning off the internet, India—the world’s largest democracy—is the global leader in shutdowns. When it blocked access to the internet in Kashmir for months in late 2019, Indian officials justified the action by saying it was necessary to temporarily limit access to the internet during periods of crisis to avoid “permanent loss of life.” Four United Nations special rapporteurs condemned the move, warning that the shutdown in Kashmir was “inconsistent with the norms of necessity and proportionality.” Practically, at least one study, by a researcher at the Stanford Global Digital Policy Incubator, has found that shutdowns are actually counterproductive to deterring violent incidents; it tracked a quadrupling of violence when networks were disrupted as compared to cases where the internet stayed on.

Although governments dictate blackouts, internet service providers are the ones who implement them. Companies frequently justify compliance with these requests as a matter of following local law, suggesting that they risk losing their licenses if they don’t. But providers should heed the UN Guiding Principles on Business and Human Rights, the most widely accepted set of rights standards for businesses, and reconsider their blind cooperation. After all, the UN Human Rights Council has unequivocally condemned measures to intentionally prevent or disrupt access to or dissemination of information online as a violation of international human rights law.

Authorities often try to justify shutdowns on flimsy legal grounds so it’s no surprise that lawsuits brought by activist lawyers in Sudan, Pakistan and Zimbabwe have successfully challenged blackouts. When confronted with state demands to broadly restrict access, internet service providers should consider filing similar suits themselves. At the very least, they should publish as much information as they can about the measures they impose in the interest of transparency or interpret requests to cause the least intrusive restrictions.

Shutdowns draw headlines, but subtler, equally devastating techniques to manipulate the internet deserve attention, too. Some authorities, such as in Chad, Kazakhstan, Sri Lanka, and Venezuela, choose to block specific social media or messaging applications or prevent traffic to livestreaming platforms.  Indonesia and Iran throttled internet speeds to a crawl, making manipulation difficult to detect. In Russia, a new “sovereign internet” law, which requires the internet to function without sending data to servers abroad, has laid the foundation for authorities there to require blocking anything from a single message or post to shutting down internet connectivity within the whole of Russia. Iran's National Information Network, a wholly separate internal network, may have allowed it to impose the most severe disconnection tracked by NetBlocks in any country in terms of its technical complexity and breadth earlier this month.

Even when the internet remains available, there’s a spectrum of overbroad laws and regulations that allow governments to pressure companies to censor the content on the web available to users in their jurisdictions. In China, creators of messaging and browser apps are required to include government filtering in all of their products. Germany’s NetzDG law threatens internet companies with hefty fines if they don’t take down “illegal” material, as defined in 22 provisions ranging widely from defamation of religions, insult of public office to threats of violence. The German approach is now being exported. Thirteen countries including the Philippines, Russia, Singapore, and Venezuela all cite it to justify their own regressive measures. Vietnam passed similar legislation and claims that Facebook now complies with most of its requests to restrict or remove content, although this has been difficult to verify.

Of course, it makes sense for internet companies to exercise vigilance over the content shared on their platforms. There is almost universal consensus in favor of the elimination of images of child pornography from the internet. In the face of public pressure and scrutiny, Facebook has taken steps to respond to attempts to use its platform to manipulate elections in the US and fan the flames of hate and violence in Myanmar. Following mass shootings livestreamed on Facebook Live or Twitch, internet companies and governments have developed policies like the Christchurch Call, encouraging the “elimination” of content deemed problematic in real time before its even uploaded.

But upload filters like these could easily be leveraged for prior restraint with no appeal. Since the definitions of “terrorism” or “extremism” are so vague, there’s a risk that many lawful acts of expression would be taken down before anyone sees them, especially in places like Egypt or Thailand, where repressive governments quell dissent by labelling and prosecuting their opponents as “terrorists” or purveyors of “fake news.”

While governments have had success getting material removed from the internet, individuals still struggle to have their requests resolved. Women and girls seeking removal of non-consensually shared intimate images, or looking for relief from online harassment, are especially vulnerable. Ironically, while companies and governments lead the charge in the fight against “extremism,” the largely female victims of harassment are being asked to carry much of the burden for the response themselves.

Organizations such as Access Now, which leads the #KeepItOn campaign, have devoted themselves to challenging blanket shutdowns and shaping conversations around more appropriate regulations. Nuanced approaches to intermediary liability could keep internet companies from censoring too much in an effort to avoid lawsuits. Companies should prioritize developing rights-respecting policies that support the safety of individuals online while protecting and promoting a free internet. Otherwise, they risk becoming tools of governments seeking to quash dissent and peaceful opposition.

In the meantime, there’s a growing cottage industry of products to help circumvent internet blackout restrictions, allowing sophisticated users to get around their governments’ roadblocks. Tools like mesh networks, virtual private networks, and proxies are now an indispensable part of activists’ toolboxes. In the cat-and-mouse game of internet censorship, let’s hope that activists can stay one step ahead of internet censorship, while those who incite hate do not.