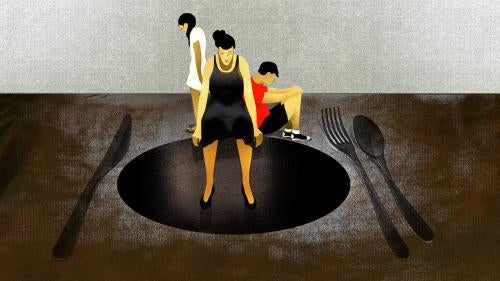 Going to the Bank for Food, Not Money: The Growing Reality of Hunger in “Rich” Countries

In 2020 you should be watching for… more people going hungry and relying on aid to feed their families in the world’s wealthiest countries.

The United Kingdom offers a stark example, as Human Rights Watch has documented. Since cuts in public spending on welfare for the poorest families began in 2010, use of the country’s largest network of food banks—making up an estimated two-thirds of the country’s food aid distribution—has skyrocketed 50-fold, to 1.6 million three-day emergency packages handed out last year. Smaller independent food banks have gone from a handful countrywide a decade ago, to around 820 today.

Schools, kindergartens, community centers, local charities, and faith groups have stepped in to fill gaps resulting from a decade of cuts; today, many provide food to vulnerable families, often with working parents, even making sure children get one warm meal a day during school holidays.

The UK is not alone. Germany’s Tafel network of around 940 food banks (or food tables), which opened in 1993 gave food to 1.65 million people last year; it has seen steady rises in demand over the past decade-and-a-half, with more and more women, children, and older people needing food aid.

In France, the Restos du Coeur (Restaurants of the Heart) network, gave out  around 130 million meals in 2017-18, the last year for which they have figures, through their emergency food aid program. One-third of such aid was directed to single parent families, and there is increasing concern about older people left to rely on their aid.

Analysts who have studied how food banks have become a feature of daily life over decades in the United States and Canada have warned that without a clear strategy to tackle hunger and improve social security, use of emergency food aid is likely to become normalized and permanent.

This hunger, so long a feature of poorer countries, risks becoming normalized in richer ones—  eroding people’s faith in their democratic institutions, and the relatively resource-rich societies in which they live.

Brexit could exacerbate hunger in the UK, especially if the UK were to leave without a deal. UK food aid providers are worried that an abrupt, unplanned departure could disrupt food supplies and cause price shocks for the country’s poorest consumers whose incomes would be most hit by the short term economic upheaval.

In France, amid widespread public protests about living standards and labor law changes, the government has begun restructuring unemployment benefits and is expected in 2020 to make changes to public pensions to address its deficits. This is likely to mean more people needing support from the Restos du Coeur so they have enough to eat.

In Germany, the coming year will see important arguments in court about whether scaling back welfare support for asylum-seekers—about 127,000 in the first nine months of 2019, which could leave many struggling to feed themselves—is lawful given Germany’s constitutionally guaranteed “dignified minimum existence.”

It can be hard to see a silver lining to the issue of hunger and food bank use in countries with more than enough resources to ensure everyone has food on the table.

Yet it is encouraging in the UK to see a broad coalition of civil society groups securing policy commitments from political parties to make the right to food enforceable in domestic law. More broadly, the discussion about the food as a human right offers a chance to change what is often a toxic conversation about human rights in the UK into one that resonates more widely with the public.

In France, the full effect of a 2016 law that requires large food retail stores to ensure food nearing its expiry date is given to those who need it rather than being wasted remains to be seen. But the early signs are promising—inspiring activists to demand other food producers (growers, processing plants, and restaurants) are also required to take similar measures. State efforts are needed at the same time to ensure that people have the means to feed their families.

Civil society organizations familiar with using the language of the 2030 UN Sustainable Development Goals in overseas aid efforts are having to articulate some of those same goals— ending poverty and achieving zero hunger—in human rights terms closer to home.

With better legal protections, better measurement, and stronger policy responses, this entirely avoidable hunger can be reduced drastically. Hunger in wealthy countries is not inevitable, and food banks are not a substitute for government action. As the UN’s former special rapporteur on the right to food and 57 other prominent academic and nongovernmental organization voices have warned, we should never get used to the idea of “leftover” food for “left behind people”.