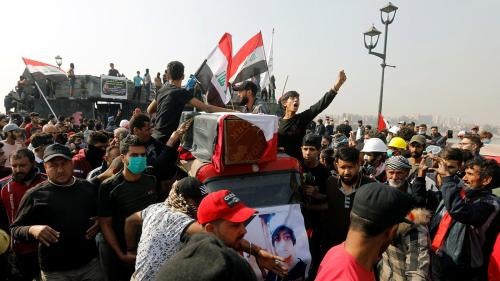 Security forces met protests in Baghdad and cities in southern Iraq in October and November with excessive force, killing hundreds. Other violations of freedom of assembly and expression and women’s rights persisted, along with the right to water, health, and a healthy environment, and the government continued to use the death penalty extensively.

In response to the protests, Prime Minister Adil Abd Al-Mahdi resigned from office on November 29. 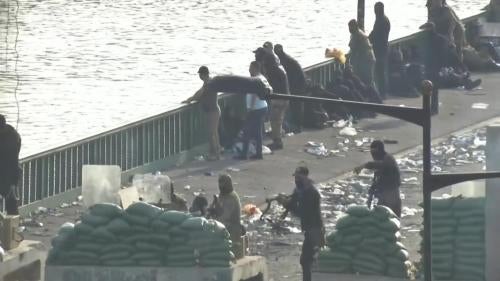 Authorities arbitrarily detained protesters and released them later without charge, and others went missing. Security forces arrested some Iraqis simply for expressing support for the movement with Facebook messages.

The government repeatedly throttled the internet to prevent people from uploading and sharing photos and videos of the protests, and blocked messaging apps.

During 2019, the extremist group ISIS continued to carried out attacks, mostly killings of community leaders and targeting security forces. Some of the crimes perpetrated by ISIS since 2014 amounted to war crimes and may have amounted to crimes against humanity and genocide. Iraq failed to make war crimes and crimes against humanity specific offenses under Iraqi law.

A 2017 UN Security Council resolution created a UN investigative team to document serious crimes committed by ISIS in Iraq. In 2019, UNITAD assisted Iraqi authorities in exhuming at least 14 mass grave sites left by ISIS in Sinjar, as a first step towards gathering evidence and building cases against ISIS suspects.

An Iraqi law from 2009 created commissions to compensate Iraqis affected by terrorism, military operations, and military errors. Compensation commissions in areas that fell under ISIS control have received thousands of compensation requests but have not paid out many claims since 2014.

Member states of the Global Coalition to Defeat ISIS continued discussions on accountability options for ISIS crimes, including the possibility of establishing a criminal tribunal in the region.

Iraqi forces arbitrarily detained ISIS suspects, many for months. According to witnesses and family members, security forces regularly detained suspects without any court order or arrest warrant, and often did not provide a reason for the arrest.

Authorities systematically violated the due process rights of ISIS suspects and other detainees, such as guarantees in Iraqi law that detainees see a judge within 24 hours, have access to a lawyer throughout interrogations, and have their families notified and  able to communicate with them.

The counterterrorism court in Nineveh represents an exception, where Human Rights Watch observed improvements to trial proceedings in 2019. Judges at the court required a higher evidentiary standard to detain and prosecute suspects, minimizing the court’s reliance on confessions alone, erroneous wanted lists, and unsubstantiated allegations.

Authorities prosecuted child suspects as young as 9 with ISIS affiliation in Baghdad-controlled areas and 11 in the Kurdistan region, younger than the minimum age of criminal responsibility under international law, and in violation of international standards that recognize children recruited by armed groups primarily as victims who should be rehabilitated and reintegrated into society.

Iraqi judges prosecuted ISIS suspects with the charge of ISIS affiliation, on the overbroad charge of Iraqi counterterrorism legislation. Trials were generally rushed, based on a defendant’s confession, and did not involve victim participation. The Iraqi government and Kurdistan Regional Government (KRG) conducted thousands of trials of ISIS suspects without a strategy to prioritize the worst abuses.

Despite requests, the government failed to disclose which security and military structures have a legal mandate to detain people, and in which facilities.

Torture and Other Forms of Ill-Treatment

Throughout 2019 Human Rights Watch received reports of widespread use of torture, including of children, by Iraqi and KRG forces to extract confessions. One man had to have his arm amputated because of arterial damage caused by torture in custody.

Despite extensive evidence of torture in detention in Iraq, in 2019 the Syrian Democratic Forces (SDF) in northeast Syria transferred at least 900 Iraqi detainees with alleged links to ISIS to Iraq. In addition, US-led coalition and SDF forces transferred at least 47 non-Iraqi foreign males suspected of ISIS affiliation to Iraq for investigation in 2018 and early 2019, including at least 11 French nationals who have been sentenced to death. In at least 30 of the cases, US forces facilitated the transfer from SDF to Iraqi custody according to court documents, testimony from defendants, and other sources.

Two of the French citizens transferred from northeast Syria to Iraq and prosecuted in Baghdad for ISIS affiliation told the judge that Iraqi security forces tortured or coerced them into making a confession.

Authorities detained criminal suspects in overcrowded and in some cases inhumane conditions. A source within the penitentiary system shared with Human Rights Watch photos of overcrowded prison cells in Nineveh holding women and children on charges of ISIS affiliation in conditions so degrading that they amounted to ill-treatment.

Despite commitments by then-Prime Minister Haidar Abadi in September 2017 to investigate allegations of torture and extrajudicial killings, authorities apparently took no steps in 2019 to investigate these abuses.

Iraqi families perceived to have ISIS affiliation, usually because of family name, tribal affiliation, or area of origin, were often denied security clearances required to obtain identity cards and all other civil documentation. This restricted their freedom of movement, right to education, and right to work, as well as access to welfare benefits and birth and death certificates needed to inherit property or remarry. Denial of security clearances also blocked such families from making claims to the commissions established in 2009 to compensate Iraqis affected by terrorism, military operations, and military errors, and from bringing court cases or challenging seizure of property by security forces or local families.

Some families were able to obtain security clearance if they were willing to first appear before a judge to open a criminal complaint against their relative who  was suspected of having joined ISIS in a process known as tabriya. After individuals opened the criminal complaint, the court issued them a document to present to security forces to obtain their security clearance. This mechanism was particularly effective in Anbar governorate, where most families with relatives suspected of ISIS affiliation that Human Rights Watch interviewed in 2019 had been able to obtain security clearance through tabriya.

Forced returns and blocked returns of displaced persons persisted throughout 2019. In early July security forces launched screenings across camps for displaced people in Nineveh to determine their origins and possible links to ISIS. Over the next two months, authorities in Nineveh and Salah al-Din evicted hundreds of displaced people in camps outside of their governorate of origin, in some cases transporting them to their home communities despite families’ serious security concerns.

At least 30,000 Iraqis who fled Iraq between 2014 and 2017, including some who followed ISIS as it retreated from Iraqi territory, were housed in and around al-Hol camp in northeast Syria. In 2019 the Iraqi government prepared to bring its nationals back and confine them in de facto detention camps because of perceived links to ISIS. The government discussed broader plans to detain families with perceived ISIS affiliation in a mass internment scheme but has yet to agree on such a plan.

In 2019, thousands of children without civil documentation because a relative was thought to have joined ISIS were prevented from enrolling in state schools, including schools inside camps for displaced people.

Lawyers and aid workers providing assistance to families with perceived ISIS affiliation reported that security forces threatened and in some instances detained them for providing these services.

For almost the past 30 years, authorities failed to provide people in southern Iraq, and particularly in Basra, with safe drinking water. Multiple government failures since the 1980s, including poor management of upstream sources, inadequate regulation of pollution and sewage, and chronic neglect and mismanagement of water infrastructure caused the quality of waterways to deteriorate. The shortages led to farmers’ irrigation of land with polluted and saline water, degrading the soil and killing crops and livestock.

The degradation of Basra’s water sources became a full-blown crisis in the summer of 2018, when at least 118,000 people were hospitalized due to symptoms doctors identified as related to water quality. Because of high rainfall and snowmelt in late 2018/early 2019, the health crisis did not recur in 2019, but authorities took no significant steps to address the causes of the health crisis. Authorities failed to make public any investigation into its specific causes or any action plan to deal with the roots of the crisis. This lack of action is particularly concerning given projected increases and lower rainfall due to climate change.

Human Rights Watch and other organizations documented a system of organized rape, sexual slavery, and forced marriage by ISIS forces of Yezidi women and girls from 2014 to 2017. However, no ISIS member in Iraq has been prosecuted or convicted for those specific crimes.

While the Kurdistan Region of Iraq has a 2011 law on domestic violence, women have few legal protections to shield them from domestic violence in Baghdad-controlled territory. Efforts in parliament to pass a draft law against domestic violence stalled throughout 2019. Iraq’s criminal code, applicable in both Baghdad-controlled territory and the Kurdistan Region of Iraq, criminalizes physical assault but lacks any explicit mention of domestic violence. Instead, article 41(1) provides that a husband has a legal right to punish his wife, and parents can discipline their children within limits prescribed by law or custom and the penal code also provides for mitigated sentences for violent acts including murder for so-called “honorable motives” or if catching his wife or female relative in the act of adultery/sex outside of marriage.

While sexual assault is criminalized, article 398 provides that such charges be dropped if the assailant marries the victim. While no recent national studies on domestic violence have been carried out, women’s rights organizations reported a high rate of domestic violence

Iraq’s criminal code does not prohibit same-sex sexual relations, although article 394 makes it illegal to engage in extra-marital sex. Paragraph 401 of the penal code holds that any person who commits an “immodest act” in public can be put in prison for up to six months, a vague provision that could be used to target sexual and gender minorities, although such cases have not been documented.

Iraq has long had one of the highest rates of executions in the world, alongside China, Iran, and Saudi Arabia. The judiciary continued to hand down death sentences to many of those convicted of ISIS affiliation under counterterrorism legislation and carried out executions without disclosing official numbers. In August 2019, authorities released Ministry of Justice data that showed 8022 detainees were on death row and the state had executed over 100 between January and August 2019.

In the Kurdistan Region of Iraq, the KRG implemented a de facto moratorium on the death penalty in 2008, banning it “except in very few cases which were considered essential,” according to a KRG spokesperson.

The Iraqi criminal code prohibits the use of the death penalty against children.

The US-led coalition against ISIS, including Australia, Belgium, Canada, Denmark, France, the Netherlands, and the United Kingdom, as well as Iranian and Turkish forces, continued to support Iraqi and KRG troops in military operations against ISIS. The coalition countries rarely made public the parameters or the exact recipients of their assistance in 2019.

Turkey increased its operations in northern Iraq against the armed Kurdistan Workers’ Party (PKK). The PKK, an armed group outlawed but active in Turkey, has long maintained a presence in northern Iraq near the Turkish, Iranian, and Syrian borders. After an unknown gunmen killed a Turkish diplomat in Erbil in July 2019, Turkey carried out airstrikes. As a result of the killing, the KRG imposed severe movement restrictions on Turkish residents of a camp in its territory who are seen as broadly sympathetic to the PKK.