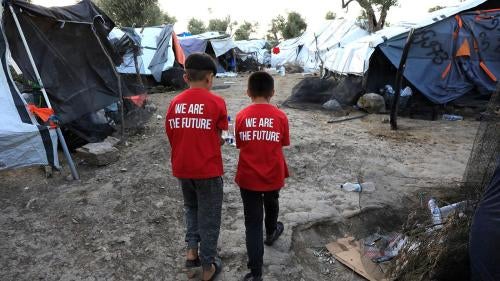 Greece continued to host large numbers of asylum seekers while failing adequately to protect their rights.

In August, the UN Committee against Torture criticized the Greek government policy—linked to the EU-Turkey deal—of blocking asylum seekers who arrive on the Aegean islands from moving to the mainland.

Beginning in August, there was a sharp increase in the number of arrivals on the islands, leading to severe overcrowding and inhuman and degrading conditions in island camps.

At time of writing, 37,000 asylum seekers, the majority women and children, were on the islands, including more than 33,400 in camps designed to host a around 6,200.

Although authorities allowed more transfers during the year, the policy continued to trap thousands in overcrowded and abysmal conditions on the islands. This includes severe overcrowding, unsanitary, unhygienic conditions, and lack of basic services such as water and food. Medical care, trauma counseling, and psychosocial support remained inadequate with deteriorating mental health among asylum seekers, exacerbated by conditions of detention and uncertainty about the disposition of their cases.

Lack of adequate and secure facilities made physical and gender-based violence common in asylum camps. In its August report, the UN Torture Committee called on Greece to take effective measures to ensure that violence against refugee, asylum seeking, and migrant women is investigated, perpetrators are prosecuted, and victims are compensated.

In October, a new asylum law made it easier to detain asylum seekers for longer periods. It also reduced safeguards for asylum seekers, including by scrapping protections for vulnerable people.

The European Court of Human Rights ruled twice, in February and June, that Greece is in violation of its human rights obligations by detaining unaccompanied children in so-called protective custody in police station cells and detention centers. Despite the rulings, at time of writing 234 children were still detained in such premises, while hundreds more were in camps with adults or homeless due to authorities’ failure to provide adequate shelter or foster care. The October asylum law failed to repeal the “protective custody” regime.

In March, a prosecutor launched an inquiry into allegations of pushbacks at the Greek-Turkish land border. Such pushbacks, including of Turkish asylum seekers, continued throughout the year. A 2018 similar investigation by the Greek ombudsman had yet to yield results.

In June, the government amended the criminal code to define rape as sex without consent, following widespread criticism of a draft bill that had failed to do so.

In a July report the ombudsman found that people with disabilities have limited access to public spaces, state services and transportation, face discrimination in the workplace, and have difficulties in accessing education. In a September review, the UN Committee on the Rights of Persons with Disabilities, criticized Greece’s treatment of asylum seekers and refugees with disabilities. The Council of Europe Committee for the Prevention of Torture issued a report in February expressing concerns about inhuman and degrading treatment in psychiatric establishments and migrant detention centers.