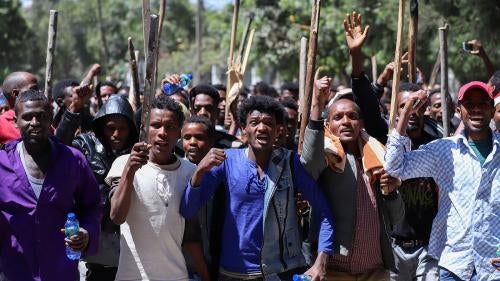 Human rights reforms implemented by Prime Minister Abiy Ahmed during his first year in office were threatened in 2019 by communal, including ethnic, conflict and breakdowns in law and order.

The June 22 assassinations of several high-level government officials, which the government linked to an alleged coup attempt in the Amhara region—as well as political unrest and communal violence in the capital, Addis Ababa, and Oromia following an incident with a popular Oromo activist and media owner, Jawar Mohammed—highlighted increasing tensions ahead of Ethiopia’s scheduled 2020 national elections.

In June, the parliament voted to postpone an already overdue but highly contentious national census, despite the importance of the exercise ahead of the 2020 elections.

Institutional reforms, notably around judicial independence and concrete measures to ensure truth, reconciliation, and accountability—all of which are key to dealing with heightened political and ethnic tensions—were limited.

The Sidama ethnic group submitted a request on July 18, 2018, to the federal government to hold a referendum to secede from the Southern Nations, Nationalities and Peoples’ Region (SNNPR). The Sidama are the largest and the first among a number of ethnic groups in SNNPR to make such a request.

The federal government failed to organize a vote within the constitutionally stipulated one-year limit. Violence on July 18 in Awassa, capital of SNNPR, between protesters demanding a vote and security forces, followed by reported violence against non-Sidama residents of the region, resulted in the deaths of 53 people according to a zonal police official, the displacement of hundreds, and significant property damage. The SNNPR region was then placed under federal security control. In August, the National Electoral Board of Ethiopia (NEBE) said it would organize a referendum on November 13, which was later delayed to November 20.

Protests that broke out in Addis Ababa on October 23, following allegations by Jawar Mohammed that the government was removing his security detail, and then spread to many parts of the Oromia region, were met on occasion by excessive use of lethal force by the security forces, notably in Ambo town. The protests devolved rapidly into communal violence in several towns. The government said the unrest resulted in 86 deaths, 10 the result of “confrontations” with security forces.

In February, the government approved the Organization of Civil Societies Proclamation and repealed the notorious 2009 Charities and Societies Proclamation, which had decimated independent human rights reporting. The new law lifts its predecessor’s 10 percent foreign funding limit. Concerns with the law remain, including limitations on foreign lobbying.

The government rewrote the country’s restrictive 2009 Anti-Terrorism Proclamation (ATP); the new draft was under review in Parliament at time of writing. However, following the alleged coup plot in June, dozens of ethnic Amharas, including journalists, were held under the ATP’s  remand provisions. At time of writing, 13 detainees were still held on pre-charge detention, under an obscure procedure that allows for indefinite pre-charge detention after the four months allowed under the ATP had elapsed. Twelve are members of the political opposition, seven of whom are members of the National Movement of Amhara (NAMA), an ethno-nationalist opposition party, and five are members of an Amhara activist cultural movement.

On February 23, 2019, Oromia regional police temporarily detained two journalists working for the private Mereja TV on the outskirts of Addis Ababa, while reporting on the government’s demolition of homes and allegations of forced displacement. Upon release, they were attacked by a group of young men, and one was beaten with sticks in plain view of police. No one was arrested in relation to the assault.

On July 18, security forces arrested employees and board members of the Sidama Media Network (SMN) and shut down the station in Awassa following protests over the government’s failure to organize a referendum, according to media reports. Workers were allowed back into the office on July 23, but those arrested were detained for weeks without charge.

The government responded to growing hate speech on social media, especially Facebook, by producing a hate speech bill in April. Shortly after the communal violence in late October, the Council of Ministers approved a draft.  Earlier drafts included vague definitions of hate speech, which, if not more narrowly defined to specifically address incitement to violence, discrimination, or illegality, may end up stifling legitimate expressions of dissent.

The government continued the practice of shutting down the internet. Following the alleged June 22 coup attempt , the prime minister sought to justify a countrywide internet shutdown, which was only completely restored on July 2, by telling media that the internet was “neither air nor water.” Earlier in June, the government shut down the internet for a week without explanation.

Arbitrary Detention, Impunity for Past Abuses

In September, Maekelawi, the police station in the heart of Addis Ababa that for years had been infamous for abuse and repression, was opened for the first time to the public after its closure last year.

While there have been fewer reports of arbitrary arrests overall, there have been ongoing reports of abusive arrests of alleged Oromo Liberation Front (OLF) members and their alleged sympathizers in areas of Oromia where there has been fighting between suspected members of the previously banned OLF and the military.

Beyond the arrests of some high-level officials in November 2018, there has been little progress on accountability for past abuses. A national reconciliation commission was set up in December 2018 but it has an unclear mandate. In Ethiopia’s Somali region, some of those who ran the region’s notorious Jail Ogaden, where torture, rape and death were common, have been sentenced for abuses committed under their command; public information on these trials was lacking.

Longstanding grievances over access to land and complex questions of identity and demarcation of internal borders on occasion led to abuses, including open conflict between ethnic groups, killings, and large-scale internal displacement.

The number of people internally displaced by conflict remained high; according to the International Organization for Migration, 1.6 million people were internally displaced as of July, 66.4 percent due to conflict.  The Internal Displacement Monitoring Center reported that ethnic clashes in Oromia, Amhara, Somali, and SNNPR regions led to 522,000 new displacements in the first half of 2019.

Between March and May, the government returned approximately 1.5 million internally displaced people to their home areas, many still unsafe, including by restricting delivery of humanitarian assistance and demolishing camps in areas of displacement. Those that returned often faced secondary displacement due to ongoing insecurity and a lack of humanitarian assistance in areas of return.

The International Committee of the Red Cross, invited back to the Somali region for the first time in 11 years, distributed emergency relief assistance in conjunction with the Ethiopian Red Cross to people affected by communal violence.

Complex and politically charged issues surrounding the management of the ongoing expansion of Addis Ababa, and clarification of constitutional provisions around Oromia’s “special interest” remain unanswered and a growing source of tension. These tensions increased in February when the Oromia regional government announced its plans to demolish 12,000 homes “built illegally” on the outskirts of Addis.

Ethiopia continued to enjoy strong support from foreign donors and most of its regional neighbors, due to its role as host of the African Union, its contributions to United Nations peacekeeping and regional negotiations, regional counterterrorism efforts, and migration partnerships with Western countries.

In October, Prime Minister Abiy was awarded the Nobel Peace Prize for his efforts to achieve “peace and international cooperation,” as a result of the peace agreement signed with Eritrea; yet many of the trickier issues around the agreement remain unsettled, including the border demarcation between the two countries.

Following the ouster of Sudan’s President Omar al-Bashir in April and a breakdown in talks between military and civilian parties, the prime minister led efforts to mediate an agreement for a transitional government together with the African Union. However, tensions with Egypt over use of the Nile flared.

In October 2019, the European Union dispersed €7 million (US$7.8 million) of a €10 million (US$10 million) electoral support package. At time of writing, no plans for international election monitoring were in place.

In its 2019 Universal Periodic Review, Ethiopia committed to reviewing outstanding requests from special procedures on an individual basis and has since responded favorably to several, marking the first authorized visits of mandate holders since 2006. The UN special rapporteur on freedom of expression was due to visit Ethiopia in December. A request by the special rapporteur on torture was pending.

Over 100,000 Ethiopians have been deported from Saudi Arabia, many with no belongings and no money for food, transportation, or shelter. Neither the government nor the international community have earmarked adequate assistance to provide deportees medical care to help them deal with injuries or psychological trauma resulting from abuses faced in Yemen and in Saudi Arabia, shelter them, or aid them to return and reintegrate in their home villages.