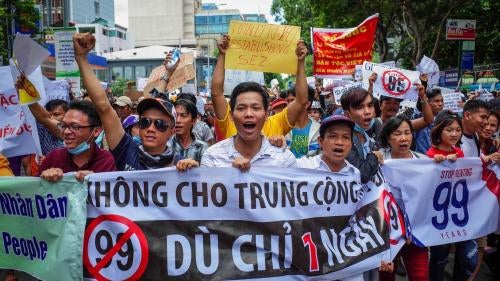 The Communist Party of Vietnam monopolizes power through the government, controls all major political and social organizations, and punishes people who dare to criticize or challenge its rule.

Basic civil and political rights including freedom of expression, association, and peaceful public assembly are severely restricted. Independent media is not allowed as the government controls TV, radio, newspapers, and other publications. Vietnam prohibits the formation of independent labor unions, political associations, and human rights organizations. Police frequently use excessive force to disperse peaceful public protests that criticize the government.

Police subject dissidents to lengthy and bullying interrogations, and detain them incommunicado for months without access to family members or legal counsel. Communist Party-controlled courts receive instructions on how to rule in criminal cases, and have issued increasingly harsh prison sentences for activists convicted on bogus national security charges.

Activists and bloggers face frequent physical assaults by officials or government connected thugs, who are not punished for these attacks. In June and July 2018 in Lam Dong province, unidentified men threw rocks and a handmade incendiary device into the house of a labor activist and former political prisoner, Do Thi Minh Hanh. In August, security agents brutally beat rights activists Pham Doan Trang, Nguyen Tin, and Nguyen Dang Cao Dai after a raid on a concert in Ho Chi Minh City. Also in August, police in Khanh Hoa province detained activist Ngo Thanh Tu and beat him repeatedly. In September, men in civilian clothes assaulted activist Huynh Cong Thuan in Ho Chi Minh City as he was driving home from work on a motorbike. Also in September, unknown thugs attacked and broke the arm of former political prisoner Truong Van Kim in Lam Dong.

Police place activists under house arrest or briefly detain them to prevent them from participating in meetings and protests or attending the trials of fellow activists. The government prohibited many dissidents and human rights defenders from traveling abroad. In March, police barred dissident poet Bui Minh Quoc from leaving Vietnam for the United States. In May, police barred human rights activist Father Dinh Huu Thoai from leaving Vietnam for a personal trip to the US, and labor activist Do Thi Minh Hanh from leaving for Germany. In June, police prohibited Father Nguyen Duy Tan from leaving for Malaysia. In August, the police denied the issuance of a passport to former political prisoner Le Cong Dinh without explanation. In September, police detained Dr. Nguyen Quang A for hours to prevent him from leaving for Australia. According to him, this was his 18th detention by police since March 2016.

Repression of Freedom of Press and Access to Information

In June 2018, Vietnam’s National Assembly passed a highly problematic law on cybersecurity that was widely criticized in Vietnam and internationally. Under the new law, which will go into effect in January 2019, service providers must take down offending content within 24 hours of receiving a request from the Ministry of Public Security or the Ministry of Information and Communications. Internet companies are also required to store data locally, verify user information, and disclose user data to authorities on demand without a court order, all of which threaten the right to privacy and could facilitate further suppression of online dissent or activism.

In August, police arrested Nguyen Ngoc Anh in Ben Tre province for allegedly using Facebook to urge people to protest. In September, various courts in Can Tho province convicted Bui Manh Dong, Doan Khanh Vinh Quang, Nguyen Hong Nguyen, and Truong Dinh Khang for their posts and shares on Facebook for “abusing freedom and democracy to infringe upon the interests of the state” under article 331 of the penal code. The four were given sentences ranging from one year to two-and-a-half years in prison.

Communist Party-controlled courts severely punished people who were accused of being affiliated with political groups or parties that the Communist Party of Vietnam views as threatening its monopoly on power. In April, five members of a group that called itself the Brotherhood for Democracy—Nguyen Van Tuc, Nguyen Trung Ton, Nguyen Bac Truyen, Tran Thi Xuan, and Pham Van Troi—were sentenced to between 7 and 13 years in prison. In August, activist Le Dinh Luong received a 20-year prison sentence for his alleged involvement with Viet Tan, a banned overseas political party. In September, the People’s Court of Quang Binh sentenced Nguyen Trung Truc to 12 years in prison for participating in various human rights activities and being a member of the Brotherhood for Democracy. In October, Luu Van Vinh, Nguyen Quoc Hoan, Nguyen Van Duc Do, Tu Cong Nghia, and Phan Trung were convicted under article 79 of the penal code for their alleged affiliation with the Vietnam National Self-Determination Coalition, an independent political group, and sentenced to between 8 and 15 years in prison.

Authorities require approval for public gatherings and systematically refuse permission for meetings, marches, or public gatherings they deem to be politically unacceptable. In June 2018, authorities harassed, detained, and assaulted dozens of people who participated in demonstrations throughout Vietnam to protest against a draft law on special economic zones and the draconian law on cybersecurity. As of October, the government convicted at least 118 protesters for disrupting public order. Many were sentenced to prison, some serving as long as four-and-a-half years.

The government restricts religious practice through legislation, registration requirements, and surveillance. Religious groups are required to get approval from, and register with, the government, and operate under government-controlled management boards. While authorities allow many government-affiliated churches and pagodas to hold worship services, they ban religious activities that they arbitrarily deem to be contrary to the “national interest,” “public order,” or “national unity,” including many ordinary types of religious functions.

Followers of independent religious group are subject to public criticism, forced renunciation of faith, detention, interrogation, torture, and imprisonment. In February 2018, authorities tried and convicted five independent Hoa Hao Buddhist practitioners including Bui Van Trung and his son Bui Van Tham, and sentenced them to between three and six years in prison for criticizing the government and staging a public protest against religious repression.

In June, men in civilian clothes broke into the house of Cao Dai religious activist Hua Phi in Lam Dong province, where they beat him and cut off his beard. In September, under police pressure, 91-year-old prominent religious leader Venerable Thich Quang Do was forced to leave Thanh Minh Zen Monastery in Ho Chi Minh City to return to his hometown in Thai Binh province.

Montagnards in the Central Highlands face constant surveillance and other forms of intimidation, arbitrary arrest, and mistreatment in custody. In detention, authorities question them about their religious and political activities, accuse them of allegiance to exile organizations, and discourage any efforts to flee Vietnam.

The United States continues to expand ties with Vietnam. In March, USS Carl Vinson arrived in Da Nang, the first US aircraft carrier to visit Vietnam since 1975. In July, US Secretary of State Mike Pompeo visited Vietnam and urged North Korea to follow Vietnam’s steps to achieve economic growth, while ignoring Vietnam’s systemic rights abuses. In January and October, US Defense Secretary James Mattis visited Vietnam to push for bilateral military ties between the two countries.

As the third largest trade partner with Vietnam, the European Union has growing leverage over the country. Negotiations for a free trade agreement reached their final stage. Over the year, the EU raised concerns over convictions of some rights activists. In September, 32 members of the European Parliament called on Vietnam to improve its rights record.

Australia and Vietnam upgraded ties under a new strategic partnership in March 2018. Australia’s concerns about Hanoi’s human rights violations are relegated to an annual bilateral human rights dialogue, without any promising signs from Hanoi.

As the most important bilateral donor to Vietnam, Japan continues to remain silent on Vietnam’s long history of rights repression. In May, Prime Minister Shinzo Abe welcomed the now-late President Tran Dai Quang in Tokyo. In September, Japanese Foreign Minister Taro Kono visited Vietnam. In both cases, human rights were not mentioned in any meeting.