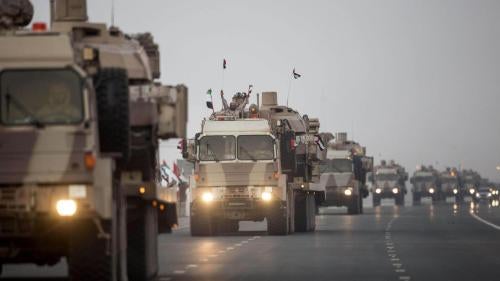 The United Arab Emirates’ intolerance of criticism continued in 2018 as authorities in May sentenced Ahmed Mansoor, an Emirati award-winning human rights activist, to a 10-year prison sentence for exercising his right to free expression. The government continues to arbitrarily detain and forcibly disappear individuals who criticize authorities.

The UAE maintains their leading role in the Saudi-led military coalition, which has conducted scores of unlawful attacks in Yemen. The UAE was implicated in detainee abuse at home and abroad.

Labor abuses persist. Migrant construction workers face serious exploitation. The UAE introduced a domestic workers law providing them labor rights for the first time in September 2017, but some provisions are weaker than those provided to other workers under the labor law.

The UAE continued to block representatives of international human rights organizations from visiting.

UAE authorities have launched a sustained assault on freedom of expression and association since 2011. The UAE arbitrarily detains and forcibly disappears individuals who criticize the authorities within the UAE’s borders. UAE residents who have spoken about human rights issues are at serious risk of arbitrary detention, imprisonment, and torture. Many are serving long prison terms or have left the country under pressure.

In March 2017, the UAE detained Ahmed Mansoor, an award-winning human rights defender, on speech-related charges that included using social media websites to “publish false information that harms national unity.” Before his arrest, Mansoor had called for the release of Osama al-Najjar, who remains in prison despite having completed a three-year prison sentence on charges related to his peaceful activities on Twitter. Authorities held Mansoor in an unknown location for more than a year with no access to a lawyer and only very limited family visits before being sentenced to 10 years in prison for crimes that appear to violate his right to free expression on May 29, 2018.

In March 2017, the UAE imposed a 10-year prison sentence on prominent academic Nasser bin-Ghaith, whom authorities forcibly disappeared in August 2015, for charges that included peaceful criticism of the UAE and Egyptian authorities. The Gulf Centre for Human Rights reported that bin-Ghaith initiated a hunger strike in February to protest poor conditions in Al-Razeen prison and he ended it in April after Emirati authorities threatened to restrict visits.

On May 5, 2018, security forces arrested British citizen Matthew Hedges at Dubai International Airport as he was preparing to leave the country following a two-week trip to the UAE. Authorities held Hedges, a PhD candidate at Durham University, in incommunicado detention for the first two weeks and did not allow him access to legal counsel until October 10, at his second court hearing, more than five months after his arrest. According to a relative, authorities held him in solitary confinement in an undisclosed location in Abu Dhabi for the majority of his time in pretrial detention. On October 16, UAE’s public prosecutor referred Hedges to the Abu Dhabi Federal Court of Appeal on state security charges of “spying for a foreign state” based partly on his confession. On November 21, the Abu Dhabi Federal Court of Appeal sentenced Hedges to life in prison. Five days later, following growing diplomatic pressure and international outrage, the UAE pardoned him.

The UAE is a leading member of the Saudi-led coalition operating in Yemen. Human Rights Watch has documented about 90 apparently unlawful coalition attacks, some likely war crimes, since March 2015.

Coalition members have provided insufficient information about the role their forces are playing in the campaign to determine which are responsible for unlawful attacks. In March 2015, the Emirati State news agency reported that the UAE had deployed 30 aircraft to take part in coalition operations. In March 2017, after a helicopter attacked a boat carrying Somali migrants and refugees off Yemen’s coast, killing and wounding dozens, a member of the UAE armed forces said UAE forces were operating in the area but denied carrying out the attack.

The UAE leads coalition efforts in southern Yemen, including by supporting Yemeni forces carrying out security campaigns. Human Rights Watch has documented abuses by UAE proxy forces, including use of excessive force during arrests, detaining family members of wanted suspects to pressure them to “voluntarily” turn themselves in, arbitrarily detaining men and boys, detaining children with adults, and forcibly disappearing dozens. Former detainees and family members reported abuse or torture inside facilities run by the UAE and UAE-backed forces. Yemeni activists who have criticized these abuses have been threatened, harassed, detained, and disappeared.

Foreign nationals account for more than 88.5 percent of the UAE’s population, according to 2011 government statistics. Many low-paid migrant workers remain acutely vulnerable to forced labor, despite some reforms.

The kafala (visa-sponsorship) system continues to tie migrant workers to their employers. Those who leave their employers can face punishment for “absconding,” including fines, prison, and deportation.

The UAE’s labor law excludes domestic workers, who face a range of abuses, from unpaid wages, confinement to the house, workdays up to 21 hours with no breaks, to physical or sexual assault by employers, from its protections. Domestic workers face legal and practical obstacles to redress.

The UAE has made some reforms to increase domestic worker protection. In September 2017, the president signed a bill on domestic workers that guarantees domestic workers labor rights for the first time including a weekly rest day, 30 days of paid annual leave, sick leave, and 12 hours of rest a day. In some cases, the law allows for inspections of recruitment agency offices, workplaces, and residences, and sets out penalties for violations.

But the 2017 law does not prohibit employers from charging reimbursement for recruitment expenses and requires that workers who terminate employment without a breach of contract compensate their employers with one month’s salary and pay for their own tickets home. In June, while authorities set out new fixed recruitment fees that included some packages of fixed salaries for domestic workers, these salaries discriminate by nationality.

Federal Law No. 28 of 2005 regulates personal status matters. Some of its provisions discriminate against women. For a woman to marry, her male guardian must conclude her marriage contract; men have the right to unilaterally divorce their wives, whereas a woman must apply for a court order to obtain a divorce; a woman can lose her right to maintenance if, for example, she refuses to have sexual relations with her husband without a lawful excuse; and women are required to “obey” their husbands. A woman may be considered disobedient, with few exceptions, if she decides to work without her husband’s consent.

UAE law permits domestic violence. Article 53 of the penal code allows the imposition of “chastisement by a husband to his wife and the chastisement of minor children” so long as the assault does not exceed the limits of Islamic law. Marital rape is not a crime. In 2010, the Federal Supreme Court issued a ruling, citing the penal code, that sanctions husbands’ beating and infliction of other forms of punishment or coercion on their wives, provided they do not leave physical marks.

Article 356 of the penal code criminalizes (but does not define) “indecency” and provides for a minimum sentence of one year in prison. UAE courts use this article to convict and sentence people for zina offenses, which include consensual heterosexual relations outside marriage.

Different emirates within the UAE’s federal system have laws that criminalize same-sex sexual relations, including Abu Dhabi, where “unnatural sex with another person” can be punished with up to 14 years in prison.

Similarly, article 177 of the penal code of the Emirate of Dubai punishes consensual sodomy by imprisonment of up to 10 years.

Additionally, the UAE’s federal penal code punishes “any male disguised in a female apparel and enters in this disguise a place reserved for women or where entry is forbidden, at that time, for other than women” with one year’s imprisonment, a fine of up to 10,000 dirhams (US$2,723), or both. In practice, transgender women have been arrested under this law even in mixed-gender spaces.

In October, the European Parliament adopted a resolution condemning the UAE’s harassment of human rights defenders, calling for the release of Ahmed Mansoor, and calling for an EU-wide ban on the export to the UAE of security equipment which can be used for internal repression. It remains the only EU body to have openly called for Mansoor’s release.