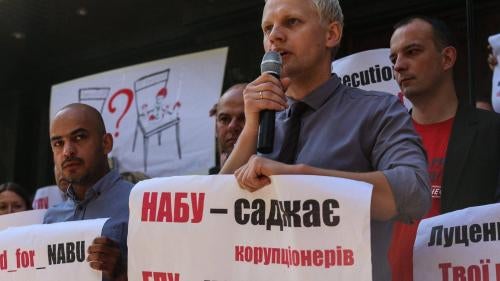 According to the Organization for Security and Co-operation in Europe (OSCE) Special Monitoring Mission, as of October, at least 212 civilians were injured or killed in 2018, mostly from shelling and light weapons fire.

Shelling across or near the contact line separating the two sides continued to damage civilian homes and infrastructure and to threaten civilian lives. Since 2014, 740 education facilities were damaged during the conflict, 16 from January to October 2018. Both sides carried out indiscriminate or deliberate attacks on schools and used them for military purposes.

In two separate cases, Ukrainian courts found several provisions of decrees regulating pension payments to be discriminatory and ordered authorities to cease restricting access to pensions. However, authorities did not observe these rulings.

Basic facilities and sanitary infrastructure at crossing points along the line of contact remained inadequate, particularly on the side controlled by Russia-backed armed groups in Donetsk and Luhansk regions. Long waits at all crossing points in extreme temperatures continued to cause civilians undue hardship.

Ukraine’s Security Service (SBU) continued to deny the secret and prolonged detention of 18 civilians in its Kharkiv secret detention facility from 2014 to 2016. All 18 were unofficially freed by the end of 2016 and their detention was never acknowledged.

In February, one of the former detainees, Konstantyn Beskorovaynyi, was reinstated as a plaintiff in a case he filed with the prosecutor’s office in July 2016. In March, a court ruled to reopen the criminal investigation. Investigations are stalled in the cases of four others who filed complaints.

Rule of Law, Accountability for Past Abuses

Justice for conflict-related abuses and crimes committed during the 2014 Maidan protests and mass disturbances in Odesa remained unaddressed several years later, despite numerous pledges from Ukrainian authorities to ensure justice. Law enforcement failed to preserve evidence after the events and to prevent suspects from fleeing the country.

In April, appeals hearings began against the acquittal of 19 anti-Maidan activists who were on trial for offenses related to the May 2, 2014 Odessa mass disturbances, which pitted pro-Maidan and anti-Maidan groups against each other, and in which 48 people died and more than 200 were injured. At time of writing, no progress was made in the appeal proceedings.

Criminal proceedings continued against former members of the Berkut riot police battalion, charged with killing and injuring protesters in the February 2014 Maidan protests. In April, charges against a pro-Maidan protester, Ivan Bubenchik, for killing two police officers in February 2014 were dropped after the prosecutor general cited a 2014 law exempting protesters from prosecution for certain crimes committed during the Maidan protests. Bubinchik remains under investigation for illegal use of weapons and endangering law enforcement.

The Ukrainian government continued restrictions on freedom of expression, freedom of information, and media freedom, seeking to justify them by citing the need to counter Russia’s military aggression in eastern Ukraine and anti-Ukraine propaganda. According to the Institute for Mass Information, a media freedom watchdog, as of October, 201 press freedom violations took place in 23 regions. These ranged from threats and intimidation to restricting journalists’ access to information.

In May, an appellate court upheld a regional court’s decision to suspend the retrial of Ruslan Kotsaba, a journalist who had been prosecuted on treason charges for calling for boycotting conscription. The court concluded that the prosecution failed to properly formulate the indictment.

In May, the SBU deported two journalists from the main Russian-state television channel, Channel 1, alleging that they had planned to spread disinformation about Ukraine. Also in May, the Ukraine editor of the Russian state wire service, RIA Novosti, in Ukraine, Kirill Vyshinsky, was arrested on treason charges for his alleged participation in “propaganda campaigns” to legitimize Russia’s actions in Crimea. Security services raided the outlet’s office in Kyiv.

In October, the European Court of Human Rights (ECtHR) extended indefinitely its September 18 ruling requesting that Ukrainian authorities refrain from reviewing 17 months’ worth of cellphone data of RFE/RL reporter Natalia Sedletska. Authorities requested the data as evidence in a criminal investigation against National Anti-Corruption Bureau Director Artem Sytnyk, who is accused of disclosing state secrets to journalists.

A March 2017 law requiring activists and journalists investigating corruption to publicly declare their personal assets remained in effect. Although many refused to comply, at time of writing none were prosecuted.

Authorities did not conduct effective investigations into numerous assaults against anti-corruption and other community activists. In November 2018, Kateryna Handzyuk, an anti-corruption activist, died from burn wounds inflicted in a July acid attack.

Patients with advanced cancer and other life-limiting illnesses continued to face barriers to effective pain relief. The regulatory reforms adopted in recent years to make opioid pain medications more accessible to those who need it have yet to be fully implemented. Healthcare workers lack proper education and training in pain treatment, or simply refuse to change their practices. HIV/AIDS and tuberculosis patients faced obstacles to accessing pain relief due in part to stereotypes surrounding drug addiction.

Members of groups advocating hate and discrimination carried out at least two dozen violent attacks, threats, or instances of intimidation against Roma people, LGBT people, and rights activists in several Ukrainian cities. In most cases, police failed to respond or effectively investigate.

In March, hate groups attacked events to promote women’s rights in Kyiv, Lviv, and Uzhgorod. In Kyiv, they physically assaulted participants while police looked on.

In June, members of a far-right group attacked a Roma settlement in Lviv, killing a man and seriously injuring several others. In October, court hearings began for four of the nine suspects in the case, eight of whom are minors.

In April, members of a radical group in Kyiv, authorized by the local municipality to carry out patrolling, attacked a Roma settlement. They torched tents and chased women and children with rocks and pepper spray. Two criminal investigations were launched, but at time of writing, those investigations had not led to any prosecutions.

However, in June, police briefly detained dozens of radicals who sought to interfere with the Kyiv Pride March, and a robust police presence at the march ensured marchers’ safety. LGBT equality marches in Krivyi Rih and Odessa also took place without major violence.

In March, a petition to stop “propaganda” of homosexuality was removed from the president’s website.

Russia has occupied Crimea since 2014 and continues to perpetrate grave human rights violations against people there for expressing pro-Ukrainian views.

On October 6, imprisoned Ukrainian filmmaker Oleg Sentsov ended his 145-day hunger strike to avoid force-feeding. Senstov was arrested in 2014 in Crimea on bogus terrorism charges and is serving a 20-year prison sentence (See Russia chapter). On May 14, he went on a hunger strike to demand the release of 64 Ukrainians held in Russia and Crimea on politically motivated charges.

In January, authorities arrested Ismail Ramazanov, a Crimean Tatar, on incitement charges for comments he made online. In court the next day, he stated that security officers beat him. Authorities refused to investigate his allegations of torture. In July, he was released from custody pending trial.

In May, Russian authorities in Crimea arrested Server Mustafayev and Edem Smailov for their alleged involvement with the Islamist movement Hizb ut-Tahrir, banned as a terrorist organization in Russia but not in Ukraine. Twenty-one men arrested in 2016 and 2017 on terrorism-related charges, based on allegations of involvement with Hizb-ut-Tahrir, remained in pretrial custody.

Also in May, a court upheld a suspended two-year sentence for Suleyman Kadyrov, a Crimean Tatar activist, on separatism charges for a comment posted to Facebook.

In June, Elina Mamedova was charged with incitement to hatred for sharing content in 2014 and 2015 from a pro-Ukraine social media page. In October, Crimea’s Supreme Court upheld a lower court’s decision to dismiss a complaint filed by Mamedova’s lawyer against investigative authorities for refusing to provide information on the qualifications of an expert it summoned to examine the materials of the case. Mamedova is at liberty as the investigation continues.

In March, a court dismissed a lawsuit against police for failing to investigate the disappearance of Ervin Ibragimov, a Crimean Tatar activist who went missing in May 2016.

The number of students in Crimea in classes with Ukrainian as the language of instruction plummeted from 12,694 in 2014 to 318 in 2018, according to the United Nations.

In January, the Parliamentary Assembly of the Council of Europe (PACE) issued a resolution calling on Ukraine to facilitate the “delivery of humanitarian assistance to the war-affected territories.” It also called on the Russian occupying authorities to respect human rights in Crimea.

Following a May visit to conflict areas in eastern Ukraine, US Special Representative for Ukraine Negotiations Kurt Volker expressed concern for the conflict’s impact on public health, infrastructure, and the safety of civilians living close to the contact line.

In June, the Council of Europe’s (CoE) commissioner for human rights urged Ukrainian authorities to step up efforts to prevent attacks against Roma and human rights defenders and prosecute those responsible for any attacks. In July, a group of UN experts called on the government to protect Roma from attacks and ensure adequate compensation for victims.

During the July European Union-Ukraine summit, European Council President Donald Tusk commended Ukraine’s efforts to establish a High Anti-Corruption Court and encouraged the country to adopt legislation to ensure the court’s effectiveness. Tusk also called for the release of “all those illegally detained in Crimea and in Russia.” But EU officials rarely publicly engage the government of Ukraine on non-conflict related concerns like media freedom and civil society issues.

Although Ukraine is not a member of the International Criminal Court (ICC), it has accepted the court’s jurisdiction over alleged crimes committed on its territory since November 2013. The ICC prosecutor’s preliminary examination as to whether it should open an investigation into abuses committed during the armed conflict remained ongoing; it also reviewed additional information it received related to the Maidan protests. It had previously determined that crimes allegedly committed in connection with events in Maidan would not fall within the ICC's mandate.