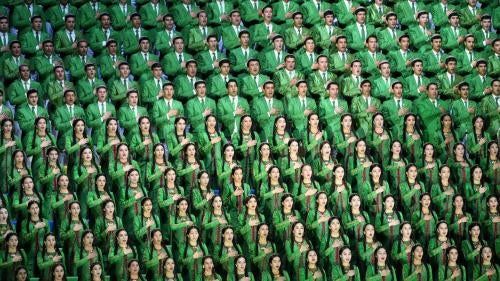 Turkmenistan is one of the world’s most isolated and oppressively governed countries. All aspects of public life are controlled by President Gurbanguly Berdymukhamedov and his associates.

In 2018, Turkmenistan faced a severe economic crisis that experts believe was caused in part by state mismanagement of hydrocarbon revenues. Yet authorities blocked people from regions most affected by the crisis from traveling so they could seek work elsewhere.

All forms of religious and political expression not approved by the government are brutally punished. Access to information is strictly controlled, and no independent monitoring groups are allowed. Dozens of victims of enforced disappearance allegedly are in Turkmen prisons.

The Organization for Security and Co-operation in Europe (OSCE) concluded that the March 2018 parliamentary elections “lacked important prerequisites of a genuinely democratic election process.” The election campaign was barely visible. All candidates aligned themselves with Berdymykhamedov’s policies.

Turkmenistan continued to exercise tight control over all print and electronic media. Foreign media outlets have almost no access to the country, and the government often retaliates against people who provide them information.

Internet access is very limited and controlled by the state. In February, Berdymukhamedov met a vice president of a German technology firm, from which Turkmenistan had been allegedly seeking technology that could enable the government to monitor and block mobile and satellite communications and internet access.

In May, Saparmamed Nepeskuliev, a freelance contributor to an exile-run news website, Alternative News of Turkmenistan (ANT), and Radio Free Europe/Radio Liberty (RFE/RL), was released after serving a three-year prison term on fabricated narcotics charges.

RFE/RL reporter, Soltan Achilova, who has been assaulted numerous times in previous years, was attacked on multiple occasions. In May, plainclothed security agents threatened her and blocked her access to a public memorial event, which she had sought to photograph. In June, two men punched Achilova when she was visiting relatives in Yoloten, knocking her over and injuring her. On the same day, the police seized her relatives’ car, saying that they would not return it until Achilova left for Ashgabat. The car was returned two days after Achilova left.

Independent groups can carry out human rights work openly only in exile. It is illegal for unregistered nongovernmental organizations (NGOs) to operate, and strict regulations create severe challenges for groups to register. The government constantly threatens civil society activists with reprisal.

ATN activist Gaspar Matalaev continued to serve a three-year prison sentence on false fraud charges in retaliation for monitoring state-sponsored forced labor in the cotton harvest. In May, the United Nations (UN) Working Group on Arbitrary Detention found that the government’s detention of Gaspar Matalaev was “an attempt to censor” his human rights activities and recommended his immediate release.

In June, an activist for Baloch minority rights, Mansur Mingelov, sentenced in 2012 to 22 years in prison on bogus narcotics and other charges, was denied adequate medical help when he experienced chest pain and high blood pressure. Mingelov was taken to a prison medical unit, but according to Amnesty International he was provided with treatment only in July, after his family brought medications and insisted that doctors administer them.

Authorities kept Turkmen students abroad under heavy surveillance. In February, they lured Omruzak Omarkulyev, who created an informal Turkmen students club at a university in Turkey, into returning to Turkmenistan. In March, Omarkulyev went missing after migration authorities banned him from returning to Turkey for his studies. RFE/RL and the Turkmen Initiative for Human Rights (TIHR), an exile group, reported that Omarkulyev was sentenced to 20 years in prison on unknown charges, and was being held at the maximum security prison in Ovadandepe.

In June, Turkmenistan’s ombudsperson published a report on the first year of the institution’s work, stating that she had resolved 25 of the 254 complaints filed. Among them was the case of a woman whom authorities had banned from leaving Turkmenistan. After the ombudsperson’s intervention, she was allowed to travel to Russia so her child, who has multiple disabilities, could receive medical treatment.

Police harassed Batyr Batyrov, a history teacher who had filed official complaints about corruption in education. In August, TIHR reported that police issued death threats to Batyrov and his family if he did not stop writing complaints.

According to TIHR, in August, the number of people whom the Turkmen authorities banned from leaving the country for foreign travel reached at least 30,874.

The government arbitrarily bans from foreign travel families of dissidents and prisoners whom it considers disloyal. For example, the Ruzimatov family, relatives of a government official in exile, remained banned from traveling abroad.

Authorities also arbitrarily barred citizens from the most economically distressed regions from leaving the country. Security officials reportedly summoned people who faced repeated denials to remind them that they may not travel abroad. According to the exile group Rights and Freedoms of Turkmen Citizens, local authorities in some regions place families of people living abroad on a special register.

Turkmen authorities also pressured people to persuade their relatives living abroad to return. In April, RFE/RL reported that authorities threatened a woman that they would press criminal charges against her brother if he did not return.

The government continued to expropriate and demolish homes in Ashgabat and its suburbs without providing adequate compensation, and in some cases harassing and intimidating residents. Homeowners were offered poor-quality compensation housing. Some had very little time to move out because of late demolition notification, and were offered compensation apartments in buildings still under construction, forcing them to rent interim apartments without compensation. Others received no explanation as to why their property was expropriated and what compensation they would receive.

Conscientious objection to military service is not allowed. At least 10 objectors were jailed, all of them Jehovah’s Witnesses.

In July, the Supreme Court upheld the 12-year prison terms of five men sentenced in 2017 for studying the works of the late Turkish Muslim theologian Said Nursi. The men were charged with incitement, financing criminal activity, and related offenses.

Turkmenistan's prison system remains rife with human rights abuses. The number of political prisoners is impossible to determine because the government does not provide numbers and does not allow independent human rights work. The justice system lacks transparency, and in sensitive cases trials are closed.

Authorities continued to hold dozens of prisoners in full isolation from family, lawyers, and the outside world, some for as long as 16 years, and denied their families information about their whereabouts and fate, including whether they are dead or alive. These amount to enforced disappearances. According to Prove They Are Alive, an international campaign dedicated to ending enforced disappearances in Turkmenistan, 121 people remained forcibly disappeared. Many are believed to be held in Ovadandepe prison, notorious for conditions that amount to torture. In February, Begmurad Otuzov, a former Turkmen security official imprisoned in 2002, died. His family had had no news of him for 15 years when they received his corpse, weighing about 45 kilograms (roughly 99 pounds).

Starting at the end of 2017, authorities for the first time allowed some family visits to Ovadandepe. In June, more than 30 relatives of prisoners held there, convicted on religious charges in or after 2016, were allowed to visit.

Homosexual conduct is a criminal offense under Turkmen law, punishable by a maximum two-year prison sentence. The Turkmen government rejected recommendations, made during Turkmenistan’s Universal Periodic Review at the United Nations Human Rights Council (UNHRC) in May, to decriminalize homosexual conduct.

In an opinion issued in April, the UN Human Rights Committee (HRC) found Turkmenistan responsible for the 2006 torture and death of human rights activist Ogulsapar Muradova. She died in Ovadandepe, shortly after her arrest and trial on politically motivated charges.

In its periodic review of Turkmenistan, the UN Committee on the Elimination of Discrimination against Women noted the adoption of various laws to ensure gender equality, but found these laws inadequate to protect women from discrimination. The committee also noted the “prevalence of child/forced marriage,” dress, and travel restrictions for women, and numerous, profound gaps in protections for women from gender-based violence.

During Turkmenistan’s Universal Periodic Review at the UNHRC in May, more than a dozen delegations urged Turkmenistan to address allegations of enforced disappearances, but the government representative refused to acknowledge the problem.

In May, the US banned the import of Turkmen cotton and products produced with it. The ban came two years after ATN and the International Labor Rights Forum petitioned US Customs and Border Protection to do so, due to forced labor in Turkmenistan’s cotton sector.

During its annual human rights dialogue with Turkmenistan, the European Union urged the Turkmen government to recognize the problem of enforced disappearances and to take effective measures to solve this issue. The EU also recommended that Turkmenistan issue invitations to UN monitors.