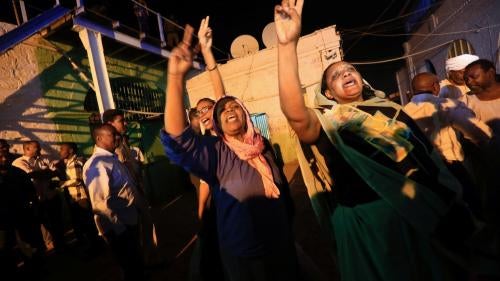 Sudan’s rights record showed little change in 2018.  Conflicts in Darfur, Southern Kordofan and Blue Nile continued. The National Intelligence and Security Service (NISS) used excessive force to break up protests and arbitrarily detained dozens of activists and opposition party members. The authorities censored the media, confiscated newspapers, detained outspoken critics, and barred key opposition figures from traveling outside the country.
Amid Sudan’s ongoing economic crisis, President al-Bashir reshuffled the government twice and the ruling National Congress Party endorsed him to run for another term in 2020. Sudan has made no meaningful attempt to provide accountability for past or current abuses in conflict zones or other serious human rights violations. It has not cooperated with the International Criminal Court (ICC) cases on charges against the president and four other men, of genocide, crimes against humanity and war crimes committed in Darfur.

Conflict and Abuses in Darfur, Southern Kordofan and Blue Nile

Although in July Sudan extended its unilateral ceasefire in conflict zones until the end of the year, its forces, including the paramilitary Rapid Support Forces, attacked over a dozen villages in the Jebel Mara region of Darfur between March and May. Attackers killed at least 23 civilians, destroyed and looted civilian property and caused thousands to flee their homes.

Seven years into the armed conflict in Southern Kordofan and Blue Nile, the government and armed opposition have failed to agree on modalities for supplying life-saving aid to civilians in need. Sudanese human rights monitors reported government-aligned militia attacks on civilians in Blue Nile in April.

In January and February, security forces violently broke up anti-austerity protests in Khartoum, Omdurman and other towns, arresting hundreds, beating protesters with sticks and hoses, and using tear gas, according to rights monitors.

Security officials dispersed several university student protests across the country, detaining and injuring many throughout the year. In January, security forces shot at student protesters in El Geneina, West Darfur, killing one, and at displaced persons at a camp in Zalingei, in Central Darfur, killing five.

During the wave of protests in January and February, security agents detained hundreds of rights activists, protesters and opposition party members and held dozens for weeks without charge.

Rudwan Daoud, a Sudanese-American activist, was detained for six weeks without charge after security agents arrested him during a protest against government land expropriations.

Activist and vocal critic Husham Ali has been detained without charge by security officials following his deportation in May from Saudi Arabia, where he had been detained since November 2017.

In July, security agents arrested social media activist and sports commentator, Ahmed al-Dai Bushara, at his home in Omdurman and held him incommunicado, without charge, for over two months, releasing him in mid-September.

Detainees were subjected to torture and ill-treatment. A Darfuri student leader, released in late January after five months of solitary confinement, was repeatedly beaten, subjected to electric shocks, threatened with death and rape, and held in harsh conditions. In October, student activist Asim Omer Hassan, who faces charges of killing a policeman during protests in May 2016, was hospitalized after being beaten in Kober prison.

Sudan has failed to investigate allegations of torture by national security officials and has yet to ratify the Convention Against Torture, which it signed in 1986. It retains the death penalty and corporal punishment for numerous crimes.

In February, a group of nine police in plainclothes raided an apartment where activist Wini Omer – a vocal critic of the public order regime – was meeting three friends, arrested the group, detained them for five days, and accused them of prostitution. On July 24, a prosecutor brought eight additional charges against Omer, including crimes against the state, punishable by death.

A religious teacher in Central Darfur, Matar Younis, arrested in April for criticizing human rights violations by government forces in Darfur, was accused of crimes against the state and espionage. In July, authorities dropped charges and released him.

In November, security officials charged activist Mohamed Boshi with espionage and crimes against the state after he was forcibly disappeared and then extrajudicially returned from Egypt to Sudan in October.

Authorities also barred opposition politicians and activists from traveling out of Sudan and confiscated passports, including of a Darfur Bar Association lawyer returning from an award ceremony in the United States in August.

Restrictions on the Media

In the first week of January alone, security officials seized print runs of eight newspapers because they had covered the anti-austerity protests. Throughout the year they suspended, delayed, or confiscated editions of newspapers for running pieces critical of the president or ruling party, its economic policies, corruption, or other sensitive topics.

During January protests, at least 18 journalists including correspondents of Reuters and AFP were arrested. Most were released the same day but four were held for several weeks without charge; journalist Amal Habani was severely beaten during interrogation. Security officials arrested a group of journalists for protesting a ban on coverage of Omdurman’s parliament in October.

Security officials summoned and interrogated editors and journalists, confiscated laptops, and warned them not to cross “red lines.” At least one columnist was banned from writing for al-Saiha newspaper. Authorities prosecuted an al-Jareeda editor and journalist for criminal defamation because they had written about corruption in March. Officials sentenced the former editor-in-chief of al-Mustagila newspaper to prison for “false news” for articles published in 2015.

Government forces used sexual violence against women and girls with impunity, particularly in Darfur where they have been implicated in widespread sexual violence in the past. In February, the United Nations expert on sexual violence in conflict noted following her visit to Sudan that there is a deep-seated culture of denial around rape.

Sudan’s morality and public order laws, which make dress code violations and other personal choice crimes punishable by humiliation and flogging, discriminate against women and girls. In 2016, Human Rights Watch documented how these laws, in combination with security officials’ abuses, can be used to silence those who challenge authority

Sudan’s laws allow marriage of girls as young as 10 and despite 2015 amendments to the criminal code that clarified the definition of rape, judicial authorities do not recognize marital rape as a crime. In May, Noura Hussein, a 19-year-old woman forced into marriage at 16, was sentenced to death for killing her husband when he tried to rape her. In June, a court commuted the sentence to five years in prison with a heavy fine.

Authorities imposed Shari’ah law on non-Muslims and brought apostasy charges against those who converted to Christianity and minority, or non-Sunni, Muslims. In October, security officials in South Darfur detained a group of Christians for several days, and forced them to renounce their faith. They charged a priest with apostasy. On February 11, authorities demolished an evangelical church building in Khartoum without notice, after previously threatening to demolish 25 churches.

Sudan hosts refugees and migrants from the region and received nearly 200,000 more refugees from South Sudan, bringing the total over 770,000. The notoriously abusive Rapid Support Forces lead its response to migration. Authorities have deported Eritreans, often without giving them an opportunity to apply for asylum. Hundreds of thousands of Sudanese refugees from Darfur, Southern Kordofan and Blue Nile live in camps in Chad, South Sudan and Ethiopia. Sudanese living in Cairo, including refugees, were subjected to harassment, interrogations, and warned of deportation by Egyptian and Sudanese officials.

Sudan hosted peace talks on conflicts in the Central Africa Republic and South Sudan, and continued participation in the Arab coalition fighting in Yemen. The US, which lifted economic sanctions in 2017, continued counter-terrorism cooperation and granted visas to the current and former heads of Sudan’s draconian national security agency, responsible for torture and other abuses.

In July, the UN security council adopted plans to dramatically downsize UNAMID and limit the area of operations to Jebel Mara region. The downsizing limits the mission’s operational area, but does not extinguish its responsibility for human rights monitoring and protection of civilians in the whole of Darfur. The mission is expected to draw down its presence and has yet to test the Sudanese government’s willingness to allow it to return to its former areas of operation to try to fulfill these duties.

In September, the UN Human Rights Council adopted a resolution to continue the work of the Independent Expert on human rights in Sudan for another year, or until a country office of the Office of the High Commissioner for Human Rights is operational.

The UN Security Council failed to press Sudan to cooperate with the ICC in the surrender of the five fugitives sought on alleged Darfur crimes, despite having referred the situation to the ICC in 2005. The ICC first announced charges in 2007.