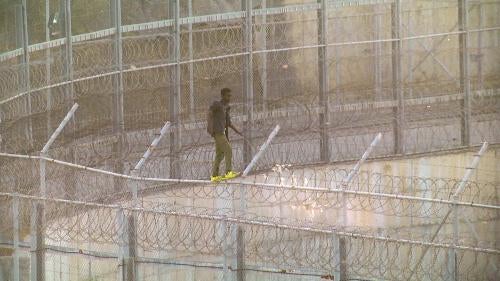 The Spanish Socialist Party assumed power in June after a no-confidence vote in parliament against the then-ruling Popular Party. The new government pledged to adopt more humane immigration policies; at time of writing, parliament was debating reforms to the controversial 2015 public security law, including to provisions allowing summary returns and limits on freedom of association and expression.

Over 49,300 people arrived by sea by mid-November. Almost 6,000 crossed land borders into the country’s North African enclaves in Ceuta and Melilla from Morocco, many by scaling fences. Migrants faced substandard conditions in arrival facilities and obstacles to applying for asylum.

Summary returns from the enclaves continued, and the new government pursued an appeal initiated by the previous government against a European Court of Human Rights 2017 ruling that Spain violated the rights of two sub-Saharan African migrants when border guards summarily returned them to Morocco from Melilla in 2013. The Council of Europe called on Spain in September to improve conditions and protection measures for migrants and asylum seekers, particularly unaccompanied children, in Ceuta and Melilla.

In January, a Ceuta judge closed the investigation into the February 2014 deaths of 15 migrants after Guardia Civil officers fired rubber bullets and tear gas into the water off the enclave’s coast.

Protests erupted across Spain in April after a court acquitted five men of gang rape and convicted them on the lesser charge of sexual assault because the prosecution did not establish the use of violence or intimidation, prompting the government to examine possible changes to the criminal code. In July, a Supreme Court ruling enforced compliance with a 2014 decision by the UN committee on discrimination against women ordering the government to compensate a woman for gender-based discrimination.

At time of writing, no police officer had been convicted for excessive use of violence during the crack-down on the October 1, 2017, independence referendum in Catalunya. In March, 25 independence leaders were indicted on various charges ranging from rebellion to misuse of public funds.

In February, the Council of Europe’s Commission against Racism and Intolerance called on Spain urgently to create an equality body to tackle racism, and recommended measures to integrate migrants and end school segregation for Roma children. Draft legislation to ensure the right to vote for persons with intellectual disabilities has remained under examination in the Spanish parliament since September 2017.

In February, the Supreme Court upheld a prison sentence for a rapper convicted of glorifying terrorism and slander against the Crown. The highest criminal court sentenced a different rapper in March to jail time on similar charges. In March, the Supreme Court overturned the 2017 conviction of a young woman for joking on Twitter about an assassination by the Basque separatist group ETA in 1973.