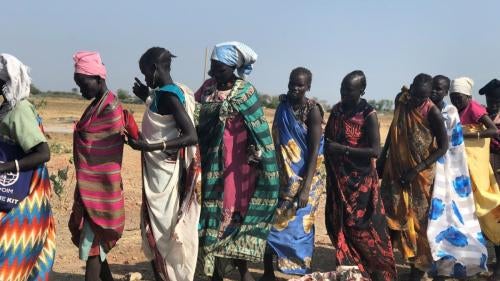 All parties to the conflict committed serious abuses, including indiscriminate attacks against civilians including aid workers, unlawful killings, beatings, arbitrary detentions, torture, sexual violence, recruitment and use of child soldiers, looting and destruction of civilian property. Some of the abuses constitute war crimes or crimes against humanity. All parties to the conflict restricted access for the United Nations (UN) mission,those providing humanitarian assistance, and ceasefire monitors.

Since the conflict started in December 2013, more than 4 million people have fled their homes, with 2.47 million taking refuge in neighboring countries. Close to 200,000 people are living in six UN “protection of civilians” sites across the country. Seven million people need humanitarian assistance, most of whom faced acute food shortages.

Lack of accountability continued to fuel the violence, while progress on establishing the hybrid court envisioned in the 2015 peace agreement remains stalled. The government continued to restrict media and civil society and arbitrarily detain perceived critics and opponents.

Attacks against Civilians and Civilian Property

All parties attacked civilians and civilian properties, but government forces were responsible for most documented abuses. People with disabilities and older people continued to be particularly vulnerable during attacks due to difficulties fleeing.

In Northern Jonglei, clashes between government and rebel forces in Yuai, Pieri, Motot and Waat displaced thousands of civilians to Akobo, Lankien, the UN site in Bor and Ethiopia. In June, four civilians were killed and another five injured, in a government attack in Kuernyuong in former Jonglei State.

The UN mission in South Sudan (UNMISS) documented how, in April and May, government and aligned fighters attacked 40 villages in opposition-controlled parts of southern Unity, killing at least 232 civilians and injuring many more, looted and burned homes, and used rape “as a weapon of war,” against at least 120 women and girls, and ordered civilians to leave their villages. Thousands fled their homes or hiding places.

In the Greater Equatoria region clashes between government and rebel forces and criminality along the main roads continued throughout the year, killing civilians and forcing people to flee to refugee settlements in Uganda or the bush. An October UN report documented the abduction of 900 civilians and other abuses by rebel and government forces in Western Equatoria between April and August.

Members of all parties committed acts of sexual violence against women and girls during armed attacks on their homes, while they were fleeing attacks or when they went to buy or search for basic necessities such as food and firewood around UN sites. Perpetrators of sexual violence crimes were rarely held accountable.

All sides recruited and used children despite repeated promises to stop. In January, the Ceasefire and Transitional Security Arrangements Monitoring Mechanism (CTSAMM) released a report indicating that “the recruitment and employment of child soldiers goes on throughout the country.” The UN reported that 6500 children were recruited and used as fighters by armed groups between October 2014 and June 2018, and were victims of other abuses such as abductions, killing, maiming and sexual abuse.

Attacks on and Restrictions of Humanitarian Aid

South Sudan remains one of the most dangerous places to be an aid worker. All parties have attacked aid workers, and restricted access to populations in need. At least 12 aid workers were killed in 2018, bringing the toll to over 100 since December 2013. In February, rebel forces detained 29 aid workers in greater Baggari area and released them after one day. In April, 10 aid workers were abducted for five days In Yei, in the former Central Equatoria state.

UNMISS peacekeepers were attacked by armed actors on several occasions; a Bangladeshi soldier was killed in June and a Nepalese soldier was injured in September. Armed groups and government soldiers continued to attack UNMISS compounds, including in Juba Bor, Bentiu, Malakal, Wau, Akobo and Melut.

Government security forces, especially the National Security Service (NSS), detained perceived government opponents and critics, including human rights activists and academics. In July, NSS officials detained activist Peter Biar Ajak, who at time of writing was being held without charge at the NSS Juba headquarters, reportedly in solitary confinement. Kerbino Wol, a businessman, remained in detention without charge since April.

National security and military officials have subjected civilian detainees to harsh conditions including beatings, electric shocks and other ill-treatment. Since the start of the conflict, countless people have disappeared or died in custody.

In January 2017, lawyer Dong Samuel and opposition member Aggrey Idri were abducted in Nairobi, Kenya and resurfaced in national security headquarters in Juba later that month. The government has not acknowledged their detention nor investigated their enforced disappearance. Similarly, the fate of two UN staff, Anthony Nyero and James Lual, who were held in the NSS Riverside detention facility in Juba in December 2016, remained unknown.

The government announced the release of 21 detainees in August and another five in October. None of the former detainees who spoke to Human Rights Watch had been charged with crimes despite being detained for months. The government also released William Endley and James Gatdet Dak, the spokesperson of Riek Machar, both of whom had been sentenced to death in February on trumped up charges.

Restrictions of Freedom of Expression and Association

National security officials summoned, questioned, and harassed journalists and editors and censored newspaper articles. In February, the UN published a report identifying 60 incidents including killings, arbitrary arrests and detentions of journalists and editors, closure, suspension or censorship of newspapers and blocking of websites, from the period of July 2016-Dec 2017.

In February and May, the NSS summoned the editor in chief of Juba Monitor and repeatedly warned her against publishing articles deemed critical of the government. In March, the Media Regulatory Authority suspended UN Radio Miraya from operating, but the station defied the authority and continued to broadcast.

Authorities, particularly the NSS, continued to harass and intimidate members of civil society. Government measures including a requirement to obtain prior NSS authorization for the conduct of public meetings, bureaucratic registration processes and surveillance, have eroded the exercise of freedoms of speech and association.

In February, Jonglei authorities issued a ministerial order dissolving all youth associations in the state for allegedly engaging in activities disrupting public order.

Civil society activists participating in the peace process faced intimidation and threats. In June, one female activist was threatened by a government representative in Addis and another surveilled. Similarly, four activists in exile in neighboring countries reported facing intimidation, threats and surveillance by authorities.

In August, a civil society activist was arrested and detained in Yambio and transferred to NSS headquarters in Juba. He was released without charge in late October.

In an annual report released in September, the United Nations Secretary General put South Sudan on a black-list of 38 states where individuals faced intimidation or reprisals for cooperating with the UN on human rights.

In September, a South Sudanese military tribunal found 9 soldiers guilty of crimes committed during a July 2016 attack on a compound housing international aid workers. Dozens of soldiers attacked the compound, killed a journalist, raped, gang raped and assaulted aid workers, and looted and destroyed property. The court acquitted one of ten soldiers prosecuted, and sentenced nine others to imprisonment and awarded financial compensation to rape and gunshot victims and 51 cows to the family of deceased journalist, John Gatluak. However, the government did not address impunity for widespread conflict related sexual and gender-based violence against South Sudanese.

South Sudan did not make progress on establishing the Hybrid Court envisioned in the 2015 peace agreement, included in the revitalized agreement. It has yet to sign the memorandum of understanding with the AU or promulgate legislation to establish the court.

In May, Kiir appointed General Gabriel Jok Riak as Chief of Defense Forces of the SPLA. Riak is subject to targeted sanctions by the UN, European Union (EU), and the United States (US).

In August, Kiir announced an amnesty for Machar and other rebel commanders, a move Human Rights Watch criticized as contravening international law prohibitions on amnesties for war crimes.

In July, by a vote of nine in favor and six abstentions, the UN Security Council imposed a globally enforceable arms embargo and targeted sanctions—travel bans and asset freezes—on two of three individuals already subject to EU unilateral sanctions in February, bringing the total number of South Sudanese individuals under UN sanctions to eight.

Under the auspices of the regional trade bloc, Intergovernmental Authority on Development (IGAD), Sudan, Ethiopia and Kenya played key roles in mediation of the revitalized peace agreement. In September, IGAD requested UN Security Council to include troops from Sudan, Uganda, Djibouti and Somalia in the “Regional Protection Force” that it mandated in the summer of 2016, and which has only partially deployed.

In September, South Sudan acceded to the Optional Protocol to the Convention on the Rights of the Child on the involvement of children in armed conflict.

The AU Commission has the authority to establish the hybrid court without the engagement of the South Sudanese government under the terms of the 2015 peace agreement, and the revitalized agreement, but has yet to move ahead in the face of lack of progress by South Sudanese authorities.