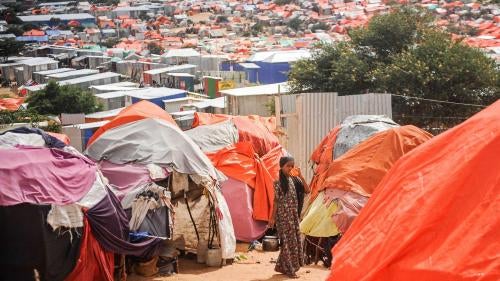 Fighting, insecurity and lack of state protection, and recurring humanitarian crises had a devastating impact on Somali civilians in 2018. The number of internally displaced people, many living unassisted and at risk of serious abuse, reached an estimated 2.7 million.

The United Nations Assistance Mission in Somalia (UNSOM) reported 982 civilian casualties by October, over half from Al-Shabab attacks. Inter-clan and intra-security force violence, along with sporadic military operations against Al-Shabab by Somali government forces, African Union Mission in Somalia (AMISOM) troops, and other foreign forces, resulted in deaths, injuries, and displacement of civilians.

While federal and regional authorities made some progress in clarifying roles and responsibilities in the security and justice sectors, political infighting diverted from greatly needed reforms. Tensions between the former speaker of parliament, Mohamed Osman Jawari, and the executive brought parliament to a standstill for a month, resulting in the speaker’s eventual resignation.

The government has yet to endorse the list of nominees for the country’s first independent Human Rights Commission and has made no tangible progress reining in abusive security forces, notably the intelligence agency, or ending repeated forced evictions of the country’s displaced people.

Security forces unlawfully killed and wounded civilians during infighting over land, control of roadblocks, and disarmament operations, particularly in Mogadishu and Lower Shabelle. Dozens of government and security officals and former electoral delegates were assassinated; Al-Shabab claimed responsibility for some of the killings.

Intelligence agencies at the federal level, in Puntland and Jubaland, arbitrarily arrested and detained many individuals for prolonged periods without charge or access to legal counsel or family members. Somali authorities and Somalia’s international partners committed to building an accountable national security sector, but the federal government failed to pass legislation clarifying the mandate of the intelligence agency.

While military prosecutors handed over some files implicating security force members to civilian judges, military courts continue to try a broad range of cases and defendants, including for terrorism-related offenses, in proceedings falling far short of international fair trial standards. According to media reports and the United Nations, the government in 2018 carried out at least four executions of security force personnel mainly convicted of murder of other members of the security forces.

Tensions between Somaliland and Puntland in the contested Sool border region led to armed clashes, including in January when Somaliland took over the strategic town of Tukaraq. The UN said the fighting resulted in the displacement of 12,500 civilians.

Civilians were targeted or faced indiscriminate attacks during clan violence, notably in Ceel Afweeyn in Sanaag region, Galgaduud, and Hiraan.

In July, media reported that Kenyan forces deployed outside of AMISOM forces had raped three women and two girls in Belet-Hawo town along the Kenyan border.

In a December 2017 report, the UN highlighted the lack of transparency around AMISOM investigations and prosecutions, and raised concerns about the lack of formal efforts to protect victims and witnesses from reprisals.

Al-Shabab committed serious abuses, including forcibly recruiting children and adults; arbitrary executions, notably of those it accused of spying for the government and foreign forces; and extorting “taxes” through threats. Al-Shabab attacks against civilians and civilian infrastructure using improvised explosive devices (IEDs), suicide bombings, and shellings in Mogadishu resulted in hundreds of civilian deaths and injuries.

Al-Shabab continues to prohibit most nongovernmental organizations and all UN agencies from working in areas under its control. The group continued to blockade government-controlled towns and  attacked civilians who broke the blockades, destroying goods and vehicles.

All Somali parties to the conflict continued to commit serious abuses against children, including killings, maiming, recruitment and use in military operations.

Al-Shabab pursued an aggressive child recruitment campaign with retaliation against communities refusing to hand over children, particularly in Galmudug and South West State. As a result, hundreds of children, many unaccompanied, fled their homes to escape. According to the UN, in July residents of Xaradheere, a locality that has repeatedly come under pressure to provide children to Al-Shabab, fought back, resulting in deaths and significant civilian displacement.

On January 18, Somali and US military forces rescued 36 children from an Al-Shabab-run camp in Middle Shabelle. They were handed over to the UN for rehabilitation one week later.

Somali authorities, particularly the National Intelligence and Security Agency (NISA), unlawfully detained, and at times prosecuted in military courts, children with alleged ties to Al-Shabab. On appeal, Puntland judges reduced, but did not overturn, prison sentences determined by its military court in 2016 to 40 children who fought for Al-Shabab.

According to humanitarian actors, over 204,000 people had been forcibly evicted in the first eight months of 2018, including by government forces, primarily in Mogadishu and Bay region.

In December 2017, security forces demolished dozens of informal settlements, including humanitarian infrastructure, without sufficient warning or providing residents with alternative settlements, leaving around 30,000 people homeless. The Benadir regional administration investigated the evictions, and in April suggested how to tackle forced evictions but did not press for accountability.

Humanitarian agencies faced serious challenges in accessing vulnerable populations due to insecurity, restrictions imposed by parties to the conflict, illegal checkpoints, and extortion. Targetted attacks on aid workers persist. On May 2, a staff member of the International Committee of the Red Cross (ICRC) was kidnapped from an ICRC residence in Mogadishu; she had not been released at time of writing.

Internally displaced women and girls remain at particular risk of sexual and gender-based violence by armed men, including government soldiers and militia members, and civilians.

Positively, federal and some regional authorities have adopted measures and legislation to improve their capacity to prosecute sexual violence. In May 2018, the federal cabinet endorsed a progressive Sexual Offences Bill; at time of writing, the bill is before parliament.  Impact and implementation, including of the 2016 Puntland sexual offenses law, have been limited.

The Somali penal code, currently being revised, classifies sexual violence as an “offence against modesty and sexual honor” rather than as a violation of bodily integrity, punishes same-sex intercourse, and imposes criminal penalties for speech considered insulting to authorities.

Targeted attacks on media, including harassment and arbitrary detentions, continued.  The Somali authorities seldom investigate cases of killings or attacks on journalists.

On July 26, a police officer shot dead Abdirizak Kasim Iman, a cameraperson for a privately owned television station, at a checkpoint in Mogadishu. According to the UN, the Somali Police launched an investigation, but at time of writing no arrest has been made.

In December 2017, Muse Bihi Abdi  was sworn in as president of Somaliland. The Somaliland government arbitrarily arrested numerous journalists and critics—targeting people who spoke out on “controversial issues,” notably the ongoing border tensions with Puntland and unity with Somalia.

In April, Naima Ahmed Ibrahim, a popular poet; Mohamed Kayse Mohamud, a blogger; and Boqor Osman Aw-Mohamud, an outspoken traditional elder, were convicted under vague and overly broad criminal provisions for public criticism of government policies and public officials. Police officials and judges violated due process rights during their detention and trials. All three subsequently received a presidential pardon. According to the independent nongovernmental organization, Human Rights Center, since the inauguration of Somaliland’s new president, 18 journalists have been arrested and five convicted under similar provisions. In four cases, prison terms were later converted into fines.

Positively, in July the Somaliland House of Representatives rejected problematic  amendments made by the Upper House (Guurti) to the Rape and Sexual Offences Bill that defined an adult as 15 years of age and above, and removed criminal responsibility of close male relatives for forced marriage. In August, the president signed the bill into law.

International support focused on building Somalia’s security sector, including the integration of regional forces, including through implementation of the government’s transition plan; attention to ensuring accountability for abuses remained limited.

The United States Defense Department continued to conduct airstrikes and joint operations with an increase in strikes in the Jubaland region. The department concluded without substantiation that there were no civilian casualties in its operations in 2018. However, in May, media and the UN reported five civilians casualities during a joint US-Somali raid in Afgooye district; the Pentagon announced in June that it found the allegations “not credible.” After media reported the alleged killings of 10 civilians in Barire, the US Naval Criminal Investigative Service committed to a second investigation into the August 2017 incident, but results have not been made public at time of writing.

The diplomatic crisis between Qatar and other Gulf countries continued to exacerbate tensions in Somalia, between Mogadishu and federal states, with Somaliland, as well as among Mogadishu’s political elite, over a United Arab Emirate company’s development of key ports.