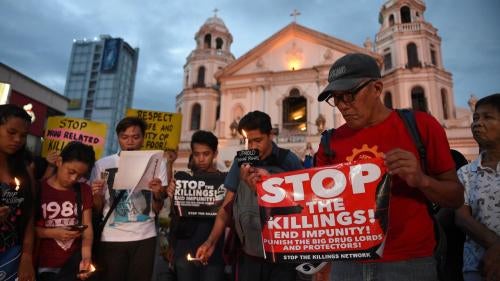 The human rights crisis in the Philippines unleashed since President Rodrigo Duterte took office in June 2016 deepened in 2018 as Duterte continued his murderous “war on drugs” in the face of mounting international criticism.

In March, Duterte announced that the Philippines would withdraw from the International Criminal Court (ICC) “effective immediately” in response to the ICC’s move in February to launch a preliminary examination of “drug war” killings to determine whether to open a full-blown investigation.

Duterte sought to silence his critics via various means. His most prominent critic, Senator Leila de Lima, remained in detention on politically motivated drug charges. In May, the Philippine Supreme Court took unprecedented action to remove Chief Justice Maria Lourdes Sereno, apparent reprisal for her criticism of Duterte’s “drug war” and other abusive policies. In September, Duterte revoked the amnesty given to Senator Antonio Trillanes IV, another Duterte critic, by the previous administration for leading mutinies in 2003 and 2007 when he was a naval officer; in October, a Manila court denied a Department of Justice petition to issue a warrant for his arrest.

In November, in a rare triumph of accountability in the Philippines, a Manila court found three police officers guilty for the murder of 17-year-old Kian delos Santos in August 2017. The killing, which was caught on surveillance camera, sparked outrage against the “drug war.” In September, a court in Bulacan province convicted ex-army Maj. Gen. Jovito Palparan and two other military men for the kidnapping and illegal detention of Karen Empeño and Sherlyn Cadapan, two student activists who were allegedly abducted, raped, and tortured by military agents in 2006. The two women remain missing.

The Duterte administration’s “war on drugs” continued in 2018 and expanded into areas outside the capital, Metro Manila, including to the provinces of Bulacan, Laguna, Cavite, and the cities of Cebu and General Santos.

According to the Philippine Drug Enforcement Agency (PDEA), 4,948 suspected drug users and dealers died during police operations from July 1, 2016 to September 30, 2018. But this does not include the thousands of others killed by unidentified gunmen. According to the Philippine National Police (PNP), 22,983 such deaths since the “war on drugs” began are classified as “homicides under investigation.”

The exact number of fatalities is difficult to ascertain because the government has failed to disclose official documents about the “drug war.” It has issued contradictory statistics and, in the case of these “homicides under investigation,” stopped releasing the figures altogether.

Masked gunmen taking part in killings appeared to be working closely with police, casting doubt on government claims that most killings have been committed by vigilantes or rival drug gangs.

Duterte has vowed to continue his anti-drug campaign until his term ends in 2022. In July 2018, he again pledged to continue the “war on drugs,” saying “it will be as relentless and chilling as on the day it began.”

Duterte has also vowed to protect police officers and agents carrying out the “drug war” from prosecution. Except for a few high-profile cases, the killings have not been investigated.

Since February 2017, Senator Leila de Lima has been jailed on politically motivated drug charges filed against her in apparent retaliation for leading a Senate inquiry into the “drug war” killings. Her plight has prompted international expressions of support.

In September, Duterte ordered the arrest of a colleague of de Lima’s, Senator Antonio Trillanes IV, by revoking his amnesty, forcing him to remain at the Senate premises for weeks. In October, a Manila court dismissed the government’s petition to issue the arrest warrant against Trillanes. Trillanes has been Duterte’s most vocal critic since de Lima, accusing the president and his family of corruption.

In February, the Department of Justice issued a petition that labeled more than 600 people—among them Victoria Tauli-Corpuz, the United Nations special rapporteur on the rights of indigenous peoples, and dozens of leftist activists—as members of the Communist Party of the Philippines (CPP) and its armed wing, the New People’s Army (NPA). That action put those individuals at risk of extrajudicial execution. Tauli-Corpuz called the allegation “baseless, malicious and irresponsible.” In August, a Manila court removed her name from the petition.

Philippine presidential spokesman Harry Roque alleged in March that “some human rights groups have become unwitting tools of drug lords to hinder the strides made by the administration.” That echoed comments made days prior by Foreign Affairs Secretary Alan Peter Cayetano equating efforts of some unnamed human rights organizations to stop Duterte’s murderous “war on drugs” with “being used by drug lords.”

The Philippine Drug Enforcement Agency (PDEA) announced in June that it was seeking to impose annual unannounced drug screening tests on teachers and schoolchildren starting in the fourth grade. PDEA sought to justify the move as an attempt to identify 10-year-old potential drug users so they “can get intervention while they are still young.”

Imposing drug testing on schoolchildren when Philippine police are summarily killing alleged drug users endangers children should they fail such a drug test. Mandatory testing may also violate children’s right to bodily integrity, constitute arbitrary interference with their privacy and dignity, and may deter children from attending school for reasons unrelated to any potential drug use.

Police have killed dozens of children since the start of the “war on drugs” in June 2016, deaths which Duterte has dismissed as “collateral damage.” In February, police arrested three police officers implicated in the execution-style summary killing of 17-year-old Kian Lloyd delos Santos in August 2017.

The Duterte administration ratcheted up its attack on media freedom in January 2018 by threatening the closure of Rappler.com, an online news outlet critical of the “war on drugs.” In November, the Department of Justice indicted Rappler and its editor and founder, Maria Ressa, for tax evasion. This followed months of attacks and harassment of Rappler by the Duterte government and its supporters.

New draft regulations by the Philippine House of Representatives in May would allow Congress to ban reporters who “besmirch” the reputation of lawmakers from covering the national legislature. Journalists and some members of Congress have denounced the proposed rule as dangerously ambiguous and stifling.

The killings of journalists continued in 2018, with six murdered by unidentified gunmen in different parts of the country.

The Philippines faces the fastest-growing epidemic of HIV in Asia. According to the Joint United Nations Programme on HIV/AIDS (UNAIDS), the number of new HIV cases jumped from 4,400 in 2010 to 12,000 in 2017, the last year for which data were available. Most new infections—up to 83 percent—are among men and transgender women who have sex with men. There are now an estimated 68,000 Filipinos living with HIV.

This increase has been attributed to government policy failures to respond to the epidemic. Human Rights Watch research shows that many sexually active young Filipinos have little or no knowledge about the role of condoms in preventing sexually transmitted diseases because the government fails to promote condoms vigorously, among other factors.

Human Rights Watch documented that workers and employees in the Philippines living with HIV may suffer workplace discrimination including refusal to hire, unlawful firing, and forced resignation of people with HIV. Some employers may also disregard or actively facilitate workplace harassment of employees who are HIV positive. In February, Duterte suggested to a group of returning overseas migrant workers that they avoid using condoms because they “aren’t pleasurable.”

In October, the Senate and House of Representatives approved a bill that would amend the country’s 20-year-old AIDS law. The new law outlines a rights-based response to the epidemic and prohibits discrimination against people with HIV in the workplace and other settings. It also makes it unlawful to disclose the HIV status of an individual without their consent. However, the law does not include specific provisions directing the government to promote condom use.

The Philippine Supreme Court heard a long-awaited argument in June that could open the door to same-sex marriage in the overwhelmingly Catholic country. In May, the city of Mandaluyong approved an ordinance to protect the rights of lesbian, gay, bisexual, and transgender (LGBT) people—the latest in a slew of similar local laws passed across the country.

The House of Representatives unanimously passed a federal nondiscrimination bill protecting LGBT people in September 2017, but opponents have stalled a companion bill in the Senate. Representatives also introduced a bill that would create civil partnerships and give same-sex couples rights in adoption, insurance, inheritance, property, and medical decision-making.

In January 2018, the European Commission expressed strong concerns about the Philippines’ compliance with the human rights obligations related to the trade preferences scheme from which it benefits.

In February, the prosecutor of the International Criminal Court (ICC) announced that she would open a preliminary examination into the “drug war” killings in the Philippines. The Duterte administration responded by withdrawing from the Rome Statute, which takes effect in one year. In April, the European Parliament adopted a resolution calling on the Philippines to put an end to the drug war and ensure accountability, and on the EU to use all available mean—including suspending trade benefits if necessary—to persuade the Philippines to reverse its abusive trend.

Asian governments have expressed implicit or explicit support for the anti-drug campaign. The Indonesian government in February awarded then-Philippine National Police Director-General Ronald dela Rosa its highest honor, the Medal of Honor, for his “rock star-like inspiration to the Indonesian national police and the Indonesian people on how to fight the war on drugs.”

In May, the South Korean Embassy in Manila and the Korean Police National Agency donated more than 130 vehicles to the Philippines National Police despite its role in the “drug war” killings.

The US Congress regularly appropriates assistance to the Philippine government, including substantial financing for arms sales as well as funds for law enforcement and military training. Law enforcement funding is restricted to drug user treatment projects and marine and international interdiction programs. The US military also routinely provides the Philippines military with second-hand military vehicles, ships, and non-lethal equipment.

Iceland led a joint statement on behalf of 38 states at the June session of the United Nations Human Rights Council (HRC), building on two previous joint statements, condemning the extrajudicial killings and calling for “a more formal Council initiative” if needed to hold the Philippines to its obligations as a member of the Council. It also called for the Philippines to “cooperate with the international community” to ensure investigations into these deaths. On October 12, the Philippines was elected to serve a second three-year term on the UN HRC, starting January 2019.