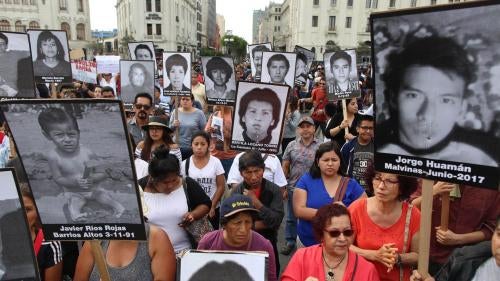 In March, President Pedro Pablo Kuczynski offered his resignation ahead of a congressional impeachment vote linked to allegations of corruption and a vote-buying scandal. Congress accepted his resignation, and Vice President Martin Vizcarra was sworn in as president.

In December 2017, then-President Kucynski granted former President Alberto Fujimori an “humanitarian pardon” based on claims of illness. Fujimori had been sentenced in a landmark trial in 2009 to 25 years in prison for killings, enforced disappearances, and kidnappings committed in 1991 and 1992. There are strong reasons to believe that his release was due to a negotiation in response to growing pressure from Fujimori supporters in Congress, including a December attempt to impeach Kuczynski. In October 2018, a Supreme Court judge overturned the pardon and ordered the imprisonment of Fujimori. An appeal remained pending at time of writing, and Fujimori had not been sent back to prison.

In July, President Vizcarra announced a referendum to reform the political and justice system after Peruvian media released audio recordings presumably implicating members of the National Magistrate Council—the body charged with appointing and removing judges and prosecutors—in corruption. The referendum, set for December 9, proposed a single-term limit for congressmen, establishing a bicameral legislature, reforms of financing rules for political parties, and changes to the composition of the National Magistrate Council.

Efforts to prosecute grave human rights abuses committed during the 20-year armed conflict that ended in 2000 have had mixed results.

Authorities have made limited progress in prosecuting wartime abuses by government forces, in part due to lack of collaboration from the Defense Ministry. According to Peruvian human rights groups, prosecutors had only achieved rulings in 78 cases related to abuses committed during the armed conflict, as of May 2017, and only 17 convictions.

Although then-President Kucynski granted former President Fujimori an “humanitarian pardon” in December 2017 based on claims of illness, on October 3, 2018, a Supreme Court judge overturned the pardon and ordered Fujimori’s imprisonment. An appeal remained pending at time of writing, and Fujimori had not been sent back to prison.

On October 12, 2018, Fujimori supporters in Congress passed a bill that would have granted prisoners who are over a certain age and have served a third of their sentences the right to serve the remainder under “electronic surveillance.” Proponents of the bill said it was intended to ease prison conditions for elderly prisoners, but the timing and language in the bill showed its objective was to ensure Fujimori’s freedom. On October 22, President Vizcarra vetoed the bill.

In April 2018, a senior prosecutor ordered that Fujimori and three of his health ministers be indicted in connection with forced sterilizations of mostly poor and indigenous women. At time of writing, Fujimori and his ministers had not been charged.

In September, the National Penal Chamber of Peru sentenced leaders of Shining Path, including its founder Abimael Guzmán, to life in prison for terrorist acts. Guzman was already serving life in prison for the 1983 killing of 69 peasants in the town of Santiago de Lucanamarca.

In 2017, new evidence surfaced corroborating longstanding allegations that former President Humala ordered egregious human rights violations, including torture, enforced disappearances, and killings, committed by security forces in the early 1990s at the Madre Mía military base in the Alto Huallaga region. In September, a commission of lawmakers charged with investigating allegations of extrajudicial killings at the Madre Mía base in 1992 concluded there was sufficient evidence against Humala to warrant reopening criminal investigations.

In 2015, the government created a national registry of victims of forced sterilizations committed between 1995 and 2001. More than 5,000 victims had been registered at time of writing.

Courts have made much less progress in addressing violations, including extrajudicial killings, disappearances, and torture, committed during the earlier administrations of Fernando Belaúnde (1980-1985) and Alan García (1985-1990).

In August, the National Criminal Chamber sentenced two retired military agents to up to 30 years in prison for their role in the forced disappearances and extrajudicial killings of 53 people at the Cabitos military base, in Ayacucho, in 1983. In August, the remains of several victims were exhumed from a nearby clandestine cemetery and given to their relatives.

Peruvian authorities estimate that some 20,000 people disappeared during the country’s armed conflict. In September, President Vizcarra ordered the establishment of a genetic profile bank that will help in the search for those disappeared.

Security forces sometimes use excessive force when responding to occasional violent protests over mining and other large-scale development projects. In January 2018, Irineo Curiñaupa Campos and Celestino Flores Ventura died from gun shots fired by Peruvian national police while they were protesting during the national agricultural strike. Since 2002, security forces have reportedly killed 155 people during protests throughout Peru, according to human rights groups. These killings have significantly declined since 2016.

In August 2015, then-President Humala issued Decree 1186 that limited the use of force by police. Under the decree, police are permitted to employ lethal force only when it is “strictly necessary” in the face of a “serious and imminent risk” of grave harm. However, Law 30151, passed in January 2014, grants legal immunity to “armed forces and police personnel who in fulfillment of their duty and using their weapons or other means of defense, cause injury or death.” The law may make it impossible to hold accountable police officers who use lethal force unlawfully. According to local human rights groups, no member of the armed forces or police has been convicted for excessive use of force by armed forces and police personnel during protests since 2002.

In 2016, the Interior Ministry announced an investigation into a group of 28 policemen, including a general, who had allegedly committed at least 20 extrajudicial killings between 2009 and 2015, and falsely reported the victims as criminals killed in combat, in order to receive promotions and awards. A trial on these crimes against 11 policemen, including 8 who are fugitive from justice, remained pending at time of writing.

Threats to freedom of expression continued to be a concern in Peru.

In June, Congress passed a law forbidding the government from purchasing media advertisement in private outlets. In October, the country’s Constitutional Tribunal ruled that the law was unconstitutional because it undermines Peruvians’ right to access information of public interest.

On July 10, a prosecutor visited the offices of IDL-Reporteros and requested the reporters’ work materials and documents. The prosecutors left, without the documents and materials, after the director of IDL-Reporteros requested to see their warrant. On July 12, lawmakers summoned the journalists and required them to inform them how they obtained the audios and provide the original audios and documents.

Gender-based violence is a significant problem in Peru. In 2017, 368 women were victims of “femicides” (the killing of a woman in certain contexts, including domestic violence and gender-based discrimination). Courts in Peru convicted 54 people on “femicide” charges between January 2015 and March 2016.

In August, Congress amended the definition of the crime of rape in the criminal code, making “lack of consent” the defining element of the crime, irrespective of whether there was violence.

Women and girls in Peru have the right to access abortions only in cases of risk to their health or lives. A bill introduced in October 2016 to decriminalize abortion in cases of rape or if the fetus suffers severe conditions not compatible with life outside the womb remained pending in Congress at time of writing. But also pending in Congress since 2016 is a bill that would recognize the “right” of a fetus conceived as a result of rape to receive “protection from the state” until it is “adopted.”

Same-sex couples in Peru are not allowed to marry or engage in civil unions. In February 2017, a group of lawmakers introduced a bill to legalize same-sex marriage. It remained pending in Congress at time of writing.

In March 2018, Peru’s National Institute of Statistics published the results of a survey showing that over 60 percent of LGBT people surveyed had suffered some type of discrimination or violence.

September changes to the civil code eliminated guardianship for persons with disabilities. Under the new rules, people with mental and physical disabilities have the same legal capacity as any other Peruvian, including the power to decide whether to undergo medical treatment, get married, or have children. The reform allows people with disabilities the option of appointing a supporter to assist them in decision-making.

More than 126,000 Venezuelans are seeking asylum in Peru, the largest number of registered Venezuelan asylum seekers in any country.

At time of writing, more than 93,000 Venezuelans had benefited from the permit. In October, President Vizcarra said that his government would carry out an “assessment” after October 31 into whether the country had the means to grant more special permits to Venezuelans.

In August, authorities announced that they would require Venezuelans entering the country to present a passport, a move that would have effectively closed the door to many Venezuelan migrants, as the process for obtaining a passport in Venezuela is extremely difficult. But on August 25, Peru’s foreign minister announced that Venezuelans could enter with an expired passport, that children and older people could enter without passports, and that people without a passport could still seek asylum.

Peru has played a leading role in regional efforts to help address the human rights crisis in Venezuela. In August 2017, then-President Kuczynski convened a meeting at which foreign affairs ministers of 12 nations signed the Lima Declaration—a comprehensive statement that condemns the rupture of democratic order and the systematic violation of human rights in Venezuela.

In June 2018, Peru delivered a statement on behalf of a cross-regional group of 53 countries, expressing concern about the human rights and humanitarian crisis in Venezuela, and calling for continued reporting by the UN High Commissioner for Human Rights.

On September 26, the governments of Peru, Argentina, Canada, Chile, Colombia, and Paraguay referred the situation in Venezuela to ICC Prosecutor Fatou Bensouda for investigation.

As a member of the Human Rights Council, Peru has supported resolutions to spotlight human rights abuses, including in Myanmar, Iran, and Venezuela.

In June, the Inter-American Court of Human Rights (IACtHR) requested that Peruvian courts review the December 2017 “humanitarian pardon” of former President Fujimori by October 29, to determine whether Peru has complied with its duty to investigate, prosecute, and sanction the grave human rights violations.

In September, the IACtHR condemned Peru for the enforced disappearance of five people committed between 1984 and 1992.