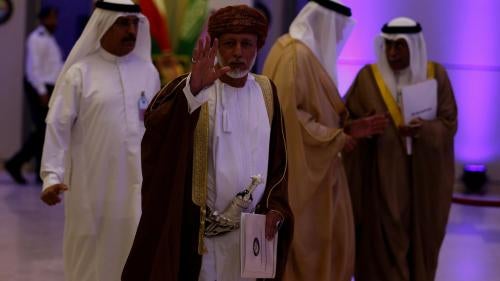 Sultan Qaboos bin Said al Said, 78, has ruled Oman since 1970. He holds an array of senior government positions, including prime minister, supreme commander of the Armed Forces, minister of defense, minister of finance, and minister of foreign affairs. Omani authorities continued in 2018 to block local independent newspapers and magazines critical of the government, confiscate books, and harass activists.

Security agencies, particularly the Internal Security Service (ISS), continued to target pro-reform activists, often for views they expressed on social media platforms like Facebook and Twitter. Courts sentenced activists to prison terms using vaguely defined laws that limit free speech, including crimes such as “insulting the Sultan” and “undermining the prestige of the state.”

According to the Omani Center for Human Rights (OCHR), the Court of First Instance in Muscat sentenced former media presenter Khaled al-Rashdi on January 2, 2018, to one year in prison under article 19 of the Cyber Crimes Law and a $2,600 fine for tweeting about “official institutions.”

On April 18, the ISS summoned internet activist Yousif Sultan al-Arimi and later detained him at the Special Division of the Omani Police General Command in Muscat. Al-Arimi did not have access to a lawyer or his family, according to reports received by the Gulf Center for Human Rights (GCHR), and authorities arrested him based on views expressed on his Twitter account. Authorities released al-Arimi on April 22.

On June 13, writer and online activist Abdullah Habib was released from Samail Central Prison while serving a six-month prison sentence on charges under article 19 of the Information Technology Crimes Act for “using the internet in what would prejudice the state public order” in addition to “contempt of religions.” Habib was due for release in October 2018, however was pardoned under Sultan Qaboos’ amnesty on the occasion of the Muslim holiday of Eid al-Fitr.

The main domain of the online magazine, Mowaten, remains blocked throughout Oman, though it can be accessed through alternative domains.

According to article 121 of the 2018 Omani penal code, participants in a public gathering of 10 individuals or more can be deemed liable to cause a breach of security or public order and can be imprisoned for up to one year and fined up to OR500 (US$1,300). However, if the gathering turns violent, those participating are subject to imprisonment of up to three years and a fine of up to OR1,000 ($2,600). One can risk imprisonment of between three to 10 years for establishing an association, according to article 116, and one to three years if one joins an association that seeks to “to contest the political … principles of the State.” If an established religious association is deemed to “contest or harm” Islam, according to article 270, punishment includes three to seven years in prison.

Protesters gathered in mid-January 2018 in Muscat urging the government to address the country’s high unemployment, and on January 29 protesters gathered in front of the Ministry of Manpower and its directorates in Muscat, Salalah, and Sur. Security forces arrested a number of those protesting; there were reports they were released.

Article 17 of the Basic Law states that all citizens are equal and bans gender-based discrimination. In practice, however, women continue to face discrimination. The Personal Status Law discriminates against women on matters such as divorce, inheritance, child custody, and legal guardianship. For instance, women can lose child custody if they re-marry, and men continue to hold guardianship of the child, regardless of whether they have custody.

Oman promulgated a new penal code in January 2018, which for the first time criminalizes non-normative gender expression. Article 266 provides for a prison sentence of one month to one year, a fine of 100 to 300 riyals (US$260-780), or both, for any man who “appears dressed in women’s clothing.”

While the previous penal code punished same-sex relations only if they led to a “public scandal,” article 261 of the new penal code punishes any consensual sexual intercourse between men with six months to three years in prison.

The 2018 penal code has no provisions prohibiting domestic violence, instead explicitly allowing parents to chastise underage children. It also does not explicitly criminalize marital rape although the language that previously excluded marital rape from the offence of rape has been removed. Cases can only be brought under general provisions that criminalize assault.

Under article 259 of the 2018 penal code, consensual intercourse outside marriage is punishable with between six months to three years’ imprisonment, and at least two years if either person is married. Criminalization of such offenses apply disproportionately to women whose pregnancy can serve as evidence of the offense.

The United Nations Committee on the Elimination of Discrimination Against Women in its 2017 review of Oman concluded that Oman has made “very little progress in removing discrimination from marriage and family related law and practice, while numerous forms of discrimination remained in the Personal Status Law.”

Oman has yet to make any significant reform to its kafala (visa sponsorship) system which ties migrant workers visas to their employers and prohibits them from leaving or changing jobs without their employer’s agreement, but officials in a response to Human Rights Watch in November 2017, said that they are studying alternatives to the system. Oman is also now the last Gulf Cooperation Council state to not provide labor law protections to domestic workers. Its labor law excludes domestic workers, and its 2004 regulations on domestic workers provide guidance on the employment relationship but fail to provide any sanctions against employers or agents for breaches.

Oman’s more than 154,000 female migrant domestic workers, according to official statistics from November 2017, are left exposed to abuse and exploitation by employers, whose consent they need to change jobs. Workers have few avenues for redress and risk imprisonment and deportation for “absconding,” even when fleeing exploitation or abuse. Frequent abuses include employers confiscating workers’ passports despite a legal prohibition; not paying workers their salaries, in full or at all; forcing them to work excessively long hours without breaks or days off; denying them adequate food and living conditions; beatings, sexual abuse, unpaid wages, and excessive working hours.

Workers reported that police at times returned them to their employers despite complaints of abuse, and Ministry of Manpower officials sided with employers during dispute-resolution processes despite workers’ complaints of severe abuse.

Both the US and UK provide significant economic and military aid to Oman. Oman’s Western allies offered muted, if any criticism, of its human rights abuses in 2018, except in annual reports. In 2018, the United States Trafficking in Persons Report maintained Oman’s Tier 2 Watch List category, recommending that Omani government continues “to increase efforts to investigate, prosecute, and convict traffickers, especially for forced labor offenses; expand labor law protections to, and enforce legal protections for, domestic workers; [and] amend the sponsorship-based employment scheme that renders expatriate workers vulnerable to exploitative labor.”