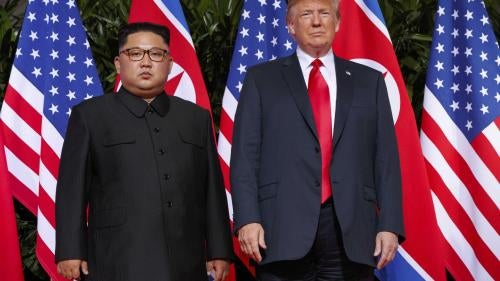 North Korea remains one of the world’s most repressive states. In his seventh year in power, Kim Jong-un—who serves as chairman of the States Affairs Commission and head of the ruling Workers’ Party of Korea—continues to exercise almost total political control. The government restricts all civil and political liberties, including freedom of expression, assembly, association, and religion. It also prohibits all organized political opposition, independent media, civil society, and trade unions.

The government routinely uses arbitrary arrest and punishment of crimes, torture in custody, and executions to maintain fear and control over the population. The government and security agencies systematically extract forced, unpaid labor from its citizens— including women, children, detainees, and prisoners—to build infrastructure, implement projects, and carry out activities and events extolling the ruling Kim family and the Workers’ Party of Korea (WPK).

The government continued its tight restrictions on unauthorized cross-border travel to China, collaborated with Chinese authorities to capture and return North Korean refugees, and punished North Koreans making contact with the outside world. The government fails to protect or promote the rights of numerous at-risk groups, including women, children, and people with disabilities.

In 2017, the Democratic People’s Republic of Korea (DPRK) fired 23 missiles during 16 tests and conducted a sixth nuclear test, raising tensions on the Korean peninsula to their highest level in decades. But starting February 2018 at the Pyeongchang Winter Olympics, North Korea engaged in new diplomatic efforts with South Korea, the United States, China, Russia, and others. Kim Jong-un had previously not met with any major world leaders, but between March and September, he met once with US President Donald Trump, three times each with South Korean President Moon Jae-in and Chinese President Xi Jinping, and once with Russian Foreign Minister Sergei Lavrov.

North Korea has ratified five human rights treaties: the Convention on the Rights of the Child (CRC), the Convention on the Elimination of All Forms of Discrimination against Women (CEDAW), the Convention of the Rights of Persons with Disabilities (CRPD), the International Covenant on Civil and Political Rights (ICCPR), and the International Covenant on Economic, Social and Cultural Rights (ICESCR), though in some cases (such as the ICCPR and ICESCR) North Korea’s state report is more than a decade overdue.

The international community has continued to press the North Korean government to engage with UN human rights mechanisms and to accept and act on the findings of the 2014 United Nations Commission of Inquiry (COI) report on human rights in the Democratic People’s Republic of Korea (DPRK, North Korea), which found the government committed crimes against humanity, including extermination, murder, enslavement, torture, imprisonment, rape and other forms of sexual violence, and forced abortion.

North Korea refuses to cooperate with the Office of the High Commissioner for Human Rights in Seoul or with Tomas Ojea Quintana, the UN special rapporteur on the situation of human rights in North Korea.

Rights of Women, Other At-Risk Groups

Gender-based discrimination begins at childhood, where schools favor boys and men in leadership roles, and girls are socialized to uphold stereotyped, subservient gender roles. Women face greater difficulty than men in being admitted to university and in joining the military and the ruling WPK, which serves as the gateway to any position of power. State authorities perpetrate abuses against women, and systematically fail to offer any protection or justice to women and girls facing sexual abuse.

North Korea also discriminates against individuals and their families on political grounds in key areas such as employment, residence, and schooling by applying songbun, a socio-political classification system that, from its creation, grouped people into “loyal,” “wavering,” or “hostile” classes. However, pervasive corruption among officials enables some room to maneuver around the strictures of the songbun system, with government officials accepting bribes to grant permissions, permit market activities, and allow travel domestically or abroad.

The government uses forced labor from ordinary citizens, including children, to control its people and sustain its economy. A significant majority of North Koreans must perform unpaid labor at some point in their lives.

Ordinary North Korean workers are not free to choose their own job. The government assigns jobs to both men and unmarried women from cities and rural areas. In many cases, these enterprises do not compensate them, forcing them to find other jobs to survive and pay bribes to be absent at their assigned workplace. Failing to show up for work without permission is a crime punishable by three to six months in forced labor training camps (rodong dallyeondae).

Former North Korean students told Human Rights Watch their schools forced them to work for free on farms twice a year, for one month at a time. Some sources reported that their schools forced students aged between 10 and 16 to work every day to generate funds to pay teachers and school administrators, maintain school facilities, and carry out government campaigns.

Kim Jong-un’s government bolstered efforts to prevent people from leaving North Korea without permission by increasing the number of border guards, CCTV cameras, and barbed wire fences on its border with China. Other tactics included jamming Chinese mobile phone services at the border and targeting for arrest those communicating with people outside the country.

Guiding networks that help North Koreans to escape to a safe third country said they continued to face limited capacity to help those fleeing, following an apparent intensified crackdown in the summer of 2017, by the Chinese government and North Korea. In 2011, before the rise of Kim Jong-un, 2,706 North Koreans arrived in South Korea, compared to 1,127 in 2017, and only 808 between January and September 2018.

The Ministry of People’s Security considers defection to be a crime of “treachery against the nation.” Harsh punishments apply to North Koreans forcibly returned by China. The severity of punishment depends on authorities’ assessments of what returnees did while in China. North Koreans caught working or living in China are sent to long term ordinary prisons (kyohwaso) or short-term detention facilities (rodong danryeonda). Those discovered trying to reach South Korea are treated more harshly and may be sent to North Korea’s horrific political prison camp system (kwanliso), where prisoners face torture, sexual violence, forced labor, and other inhuman treatment.

North Koreans fleeing into China should be protected as refugees sur place because of the certainty of punishment on return. China fails to meet its obligation to protect refugees as a state party to the 1951 Refugee Convention and its 1967 protocol. Beijing denies permission to the staff of the UN Refugee Agency to travel to border areas where North Koreans are present.

Japan continues to demand the return of 12 Japanese citizens whom North Korea abducted in the 1970s and 1980s. Some Japanese civil society groups insist the number of abductees is much higher. On August 19, five victims of the “Paradise on Earth” campaign, which used false promises to recruit approximately 93,000 ethnic Koreans (Zainichi) and Japanese nationals in Japan to go to North Korea between 1959 and 1984, sued the North Korean government for damages.

The United States government is still the only government in the world that imposes human rights-related sanctions, including on government entities, on Kim Jong-un, and on several other top officials. US President Donald Trump, despite inviting a defector to his 2018 State of the Union and raising North Korea’s human rights abuses in both that speech and a November speech in Seoul, did not raise human rights issues publicly when he met with Kim Jong-n at their summit in Singapore in June, and there is little indication that US negotiators raised human rights issues in subsequent counterproliferation negotiations with North Korea.

China is the most influential international actor in North Korea. Most of North Korea’s energy supplies come from China and it is the country’s largest trading partner. China has the ability to pressure North Korea on human rights, but has declined to do so, including during President Xi Jinping’s three meetings with Kim in 2018—in March, May, and June.