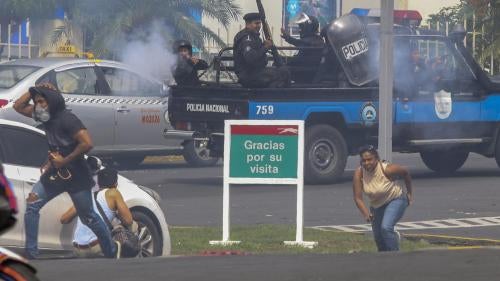 An enormous concentration of power by the executive has allowed President Daniel Ortega’s government to commit egregious abuses against critics and opponents with complete impunity. A crackdown by national police and armed pro-government groups in 2018 left 300 dead, over 2,000 injured, and hundreds arbitrarily arrested and prosecuted.

Since taking office in 2007, Ortega’s government has aggressively dismantled all institutional checks on presidential power. Stacked with his supporters, the Electoral Council barred political parties and removed opposition lawmakers. The Supreme Court of Justice has upheld Electoral Council decisions undermining political rights and allowed Ortega to circumvent a constitutional prohibition on re-election and run for a second term. His party secured a 79 percent majority in Congress in 2016, enabling it to fast-track institutional reforms that gave the president direct personal control over the police and army, allowed him to legislate by decree, and run for indefinite re-election.

In April, massive anti-government protests broke out countrywide. Police, in coordination with armed pro-government groups, brutally repressed them, killing hundreds, and injuring several thousand. Government forces were responsible for most of the 324 people killed as of September, a figure that included 23 children, and for most of the over 2,000 injured. Some killings constituted extrajudicial executions. Public hospitals under the purview of the Ministry of Health denied or obstructed medical care for wounded protesters.

Police arbitrarily arrested, and pro-government groups kidnapped, hundreds of people as part of “a policy” to “eradicate the structural conditions that support opposition voices and critics,” according to the United Nations Office of the High Commissioner for Human Rights (OHCHR). In some cases, the whereabouts of detainees were not confirmed for up to two weeks, constituting enforced disappearances during the time they were missing.

National Police subjected protesters to abuses that at times amounted to torture, including beatings, waterboarding, electric shocks, and rape. Many told the press and Human Rights Watch that they were forced to record self-incriminating videos.

As the crackdown intensified, some individuals responded violently and 22 police officers died between April and September, according to official statistics. The OHCHR found that demonstrators did not make a coordinated effort to use violence.

High level officials repeatedly accused protesters of being “terrorists” or “attempting to overthrow the government.”

Though some detainees have been released, Nicaraguan nongovernmental organizations providing legal counsel to detainees reported that 477 people were being prosecuted in connection with the protests. Among these were 136 people accused of terrorism-related offenses, some under the new counterterrorism law that the legislature enacted in July.

In September, the attorney general accused Félix Maradiaga, a chief opposition figure and director of a research center, of “financing terrorism” under the new law. According to press reports, the indictment states that Maradiaga trained people to participate in “destabilizing” activities by creating a Civil Society Leaders Institute; the institute’s stated mission is to impart values of democracy and human rights to youth.

According to the OHCHR, defendants are subject to due process rights violations that include being denied access to legal representation of their choice, being unable to meet privately with their lawyers while in detention, and having closed trial hearings.

Public officials repeatedly made stigmatizing statements to undermine the credibility of defenders. In July, during a public address, Ortega referred to prominent Catholic bishops who have denounced government abuses as “assassins” and “coup-plotters.”

In November and December, Congress stripped nine civil society organizations of their legal registration at the request of the Interior Ministry. Police raided five of their offices and confiscated documents and computers.

Authorities and armed pro-government groups harassed, threatened, intimidated, attacked, robbed, and confiscated equipment from journalists and bloggers who reported on the protests. In October, police briefly arbitrarily detained journalists from La Prensa newspaper and reporters from TV channel 100% Noticias while they covered a peaceful protest; authorities also searched their vehicles, according to media accounts. Reporters who are critical of the government often face online smear campaigns.

Foreign correspondents have at times been detained and deported. In August, for example, police detained Emilia Mello, a Brazilian-American documentary filmmaker in Carazo, confiscated her equipment, interrogated her for several hours, and deported her the next day.

During the crackdown, the Nicaraguan Health Ministry authorities fired at least 135 doctors, nurses, and other health workers from several public hospitals in apparent retaliation for participating in protests or otherwise expressing disagreement with government policy. At least 40 professors from the National University of Nicaragua (UNAN), a public institution, were fired since the start of the protests for supporting or taking part in anti-government demonstrations, according to media. The Inter American Commission on Human Rights (IACHR) also found public officials were threatened with dismissal if they did not participate in pro-government demonstrations.

Between April and October 19, the number of Nicaraguans applying for asylum in neighboring Costa Rica increased to 15,584 from only 22 in the previous three months before the crackdown began, according to the UN High Commissioner for Refugees (UNHCR). As of November, another 11,383 people had been given an appointment to seek asylum.

Thousands more fled to Mexico, Panama, and the United States.

Nicaragua prohibits abortion in all circumstances, even if a pregnancy is life-threatening or resulted from rape or incest. The 2006 total abortion ban penalizes women and girls who have abortions with prison terms of up to two years. The penalties for medical professionals range from one to six years in prison for providing abortions. A 2008 legal challenge submitted to the Supreme Court argued that the ban was unconstitutional. The court never ruled on this case, nor on a similar one regarding the 2014 constitution. The abortion ban remains in place and forces women and girls facing unwanted pregnancies to have clandestine abortions, at great risk to their health and lives.

After an in-country visit in May, the IACHR released a report concluding that Nicaraguan authorities had perpetrated widespread abuses in responding to anti-government protests that were not isolated actions by rogue agents. The IACHR then created a Special Monitoring Mechanism for Nicaragua (MESENI) to remain in country. The government refused to cooperate with MESENI and restricted its operations, including by barring its staff from inspecting detention sites.

Shortly after, the Organization of American States (OAS), the IACHR, and the Nicaraguan government agreed to create an Interdisciplinary Group of Independent Experts (GIEI) that would support the Attorney General Office’s investigations into human rights abuses. The GIEI’s mandate expired in November; in its final press conference it announced judicial authorities had not cooperated in any way foreseen in the agreement. The GIEI also stated it received no information on any investigation or sentence against police officers or members of armed pro-government groups implicated in abuses. Lastly, the GIEI called for a special prosecutorial unit to be created in the Attorney General’s Office to investigate gross rights violations in the context of protests.

In August, the Supreme Court of Justice ordered MESENI and GIEI to seek authorization from the Foreign Affairs Ministry to enter trial hearings that the law requires to be public. Neither MESENI nor GIEI have been allowed in courthouses; they have repeatedly submitted the requests to the ministry, but these have gone unanswered.

On December 19, Foreign Affairs Minister Denis Moncada expelled the MESENI and GIEI teams, accusing them of having an “interventionist” attitude, a day before the GIEI was due to release a scathing report in Managua. The report, ultimately released in Washington DC, concluded that Nicaraguan authorities, including President Ortega and his police chiefs, should be investigated for the commission of crimes against humanity.

The OAS Permanent Council held several meetings to address the crisis. In August, it created a Working Group on Nicaragua made up of 12 OAS member countries to search “for peaceful and sustainable solutions.” In September, at the behest of the Working Group, the council adopted a resolution calling on its members and permanent observers to take all “appropriate diplomatic measures to support the reinstatement of the rule of law and human rights in Nicaragua.” Only four countries—Venezuela, Bolivia, Saint Vincent, and Nicaragua—voted against it.

The government allowed the OHCHR into the country in June, after months of refusing its requests for an invitation. Authorities consistently obstructed its work, and in August, two days after the OHCHR released a searing report, the Nicaraguan government expelled its representatives.

In September, the UN Security Council held a public meeting on Nicaragua. Two-thirds of its members underscored their concern for ongoing human rights violations, the refugees they have generated, and the expulsion of the OHCHR team. Days later, UN High Commissioner for Human Rights Michelle Bachelet called on the UN Human Rights Council (HRC) to “strengthen its oversight” on Nicaragua and to “take all available measures to address the serious human rights violations which have been documented in recent reports.”

During the September HRC sessions, Argentina, on behalf of a group of 47 countries, delivered a joint statement demanding an immediate halt to extrajudicial executions, forced disappearances, judicial harassment of activists, and arbitrary arrests. Numerous other states, including Australia, Costa Rica and Iceland, raised similar concerns during their statements in their individual capacity.

Between June and July, the US State Department revoked visas for some Nicaraguan officials allegedly responsible for abuses and “undermining democracy.” The US Treasury Department sanctioned Francisco Díaz, then deputy chief of police and an official from the mayor’s office in Managua under the 2012 Magnitsky Act, “for being responsible for, or the leaders of, entities involved in serious human rights abuse.” In November, US President Donald Trump issued Executive Order 13851, leading to Treasury sanctions on Vice-President Rosario Murillo and top presidential aide Nestor Moncada Lau, freezing their assets and imposing a travel ban on both.

The Nicaragua Human Rights and Anticorruption Act, bipartisan legislation that came into force in December, grants the Treasury Department the power to sanction any “current or former official of the Government of Nicaragua or any person acting on behalf of that Government” who the US president determines has perpetrated or has responsibility for “ordering or otherwise directing, significant acts of violence or human rights violations” in the context of the crackdown that began in April 2018. The act also targets persons involved in significant corruption or responsible for undermining democracy.

In July, the Netherlands suspended an €18.4 million project (US$21,200) in the health sector due to “grave human right violations committed by government officials and parapolice groups.” Shortly after, Luxembourg froze aid disbursements, underlining its “deep concern for the deterioration of the situation” and calling for accountability.