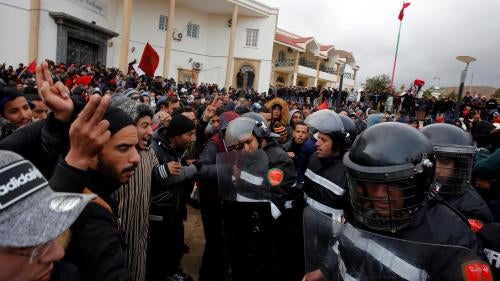 Demonstrating increasing intolerance of public dissent, Moroccan authorities in March responded to protests in the mining town of Jerada with weeks of repression, using excessive force against protesters and arresting protest leaders, who were later sentenced to months in prison. In June, a Casablanca court sentenced leaders of the “Hirak,” a protest movement that demonstrated regularly in the Rif region for months, to sentences of up to 20 years in prison after unfair trials. A court sentenced a prominent journalist and government critic to three years in prison on a dubious security charge, while he was already serving a sentence for inciting unauthorized demonstrations.

Though Human Rights Watch staff were able to operate in Morocco and Western Sahara in a relatively free manner, authorities continued throughout 2018 to restrict the activities of other NGOs, including Morocco’s biggest independent human rights organization.

Laws on violence against women and on domestic work took effect in the fall, offering modest new protections to victims of violence and labor abuse.

Freedom of Assembly, Police Violence, and the Criminal Justice System

Morocco’s Ministry of Human Rights stated that security services broke up only three percent of the 17,511 demonstrations that protesters organized in Morocco in 2017. The dispersals, the ministry said, were conducted in a manner consistent with the “respect of basic freedoms and the rule of law.” However, in both 2017 and 2018, Human Rights Watch documented several instances of excessive use of force in breaking up protests, as well as arrests of peaceful protesters on grounds such as demonstrating without a permit and assaulting police.

The Code of Penal Procedure gives a defendant the right to contact a lawyer after 24 hours in police custody, extendable to 36 hours. But detainees do not have the right to a have a lawyer present when police interrogate or present them with their statements for signature.

Starting on March 14, authorities met socioeconomic protests in the impoverished northeastern mining town of Jerada with a crackdown that went well beyond an effort to bring allegedly violent protesters to justice. In one incident captured on video, a police vehicle on March 14 sped into a protest, hitting 16-year-old Abdelmoula Zaiqer and severely injuring him. Police agents broke into houses without showing warrants, beat several men upon arrest, and broke doors and windows, local activists and a lawyer said. Between March 14 and May 31, authorities arrested and prosecuted at least 69 protesters in Jerada; four protest leaders received between three and nine months in prison.

The “Hirak,” a socioeconomic protest movement in the Rif region that started in 2016, staged several largely peaceful mass protests until a police crackdown in May 2017 led to the arrest of more than 450 activists. Fifty-three of them, including the movement’s main leaders, were transferred to a prison in Casablanca, where they faced a year-long mass trial. The court of first instance rejected defendants’ claims that their confessions were obtained through torture and coercion, despite medical reports that gave some support to their claims. On June 26, the court convicted all of the defendants. The charges included rebellion, violence against police forces, staging unauthorized protests, and receiving foreign funding. The court sentenced them to prison terms from one to 20 years.

On September 25, the coastguard fired on a boat in the Mediterranean, killing student Hayat Belkacem, 20, and wounding three other passengers, who were apparently trying to migrate to Europe. Morocco’s state news agency said that the coastguard opened fire after the boat acted “suspiciously” in Moroccan waters and the pilot disobeyed orders. Authorities pledged to investigate the killing but had not disclosed their findings at time of writing.

On October 17, a Tetouan court of first instance sentenced Soufian al-Nguad, 28, to two years in prison for incitement to insurrection, spreading hate, and insulting Morocco’s flag and symbols, after he criticized the killing of Belkacem on Facebook and encouraged people to march in protest at the incident.

Authorities frequently impeded events organized by local chapters of the Moroccan Association for Human Rights (AMDH) by denying access to planned venues. In a typical instance, on March 12, security forces in the city of Beni Mellal blocked the entrance of a community center where the local branch had planned a conference. Authorities provided no written justification for the interdiction. Between January 2017 and July 2018, 16 events organized by AMDH were cancelled throughout Morocco, after authorities either directly denied access to participants or pressured the venue’s operator to cancel the events, according to the AMDH.

The government has continued to impose a de facto ban on research missions by Amnesty International since 2015, despite relatively unimpeded access of the organization for nearly 25 years before then. Human Rights Watch researchers were able to conduct research missions in 2018 to Jerada and El-Ayoun in Western Sahara, but were frequently followed by cars containing men in civilian clothes.

The Press and Publications Code, adopted by parliament in July 2016, eliminates prison sentences for speech-related offenses. Meanwhile, the penal code maintains prison as a punishment for a variety of nonviolent speech offenses, including for “causing harm” to Islam, the monarchy, and “inciting against” Morocco’s “territorial integrity,” a reference to its claim to Western Sahara.

Authorities prosecuted journalists and social media activists for criminal offenses that, while not ostensibly journalism-related, were pursued apparently in reprisal for their speech activities.

On November 14, an appeals court in Sale, near Rabat, confirmed the five-year prison term for Elmortada Iamrachen, 32, one of the main spokespeople for the Rif’s “Hirak” protest movement. A court convicted lamrachen in November 2017 of inciting and praising terrorism in Facebook posts, based on a confession to police that he had sought, via these posts, to incite readers to engage in terrorism. Iamrachen repudiated the confession shortly after he signed it, and told the court it was coerced.

On June 28, a Casablanca court of first instance sentenced journalist Hamid El Mahdaoui to three years in prison for failing to report a security threat. The conviction was based on a phone call he received from a man who said he intended to create armed strife in Morocco. The court did not accept El Mahdaoui’s main line of defense—that he had concluded the caller’s declarations to be idle chatter. A noted critic of the government, El Mahdaoui was already serving a one-year sentence for “inciting people to participate in an unauthorized protest.”

The United Nations-sponsored process of negotiations between Morocco and the Polisario Front for self-determination of Western Sahara, most of which is under de facto Moroccan control, remained stalled despite visits to the region of Horst Kohler, envoy of the UN secretary-general. Morocco proposes a measure of autonomy under its rule but rejects a referendum on independence.

For several weeks in March and April, and again between September and November, three prisoners sentenced to life and one sentenced to 30 years, all part of the “Gdeim Izik” group, conducted a hunger strike in Kenitra prison, to demand that they be moved to prisons nearer to their families in Western Sahara, about 1,200 kilometers south. The demand was not met at the time of writing. Along with some 20 co-defendants, the three were convicted in unfair trials in 2013 and 2017 of responsibility in the deaths of 11 security force members during clashes that erupted after authorities forcibly dismantled a large protest encampment in Gdeim Izik, Western Sahara, in 2010. Both courts relied almost entirely on their confessions to police to convict them, even though the defendants repudiated those confessions and said they signed under torture without being permitted to read them.

Moroccan authorities systematically prevent gatherings in Western Sahara supporting Sahrawi self-determination, obstruct the work of some local human rights NGOs, including by blocking their legal registration, and on occasion beat activists and journalists in their custody and on the streets.

On June 28, pro-independence activists organized a protest in El-Ayoun coinciding with the visit of UN envoy Kohler. Police beat at least seven activists, including members of the Sahrawi Association of Victims of Grave Human Rights Violations Committed by the Moroccan State (ASVDH) , according to the ASVDH, which sent complaints to El-Ayoun’s prosecutor. No investigation was opened, to Human Right Watch’s knowledge.

On June 25, Mohamed Salem Mayara and Mohamed El Joumayi, two journalists for the website Smara News and correspondents of the pro-Polisario RASD TV, were accused of throwing stones and blocking a street. The charges came months after they published pictures of a policeman with his gun drawn in the city of Smara in Western Sahara. Police arrested Mayara and El Joumayi on March 27 in Smara, then the same policeman beat them in a van on their way to El-Ayoun, their lawyer, Mohamed Aboukhaled, told Human Rights Watch. At time of writing, they remained in detention while their trial continued.

The government has yet to approve a draft of Morocco’s first law on the right to asylum. Between 2013 and 2017, a Moroccan ad hoc inter-ministerial commission granted refugee cards and one-year renewable residency permits to 745 persons, most of them sub-Saharan Africans, whom the UN High Commissioner for Refugees (UNHCR) recognized as refugees. Since then, Morocco allowed another 1,106 UNHCR-recognized refugees access to essential public services, such as education and health, but not the right to work.

In September, Amnesty International reported on a “large-scale crackdown on thousands of sub-Saharan migrants, asylum seekers, and refugees without due process.” The group said that security forces have carried out raids in several cities in the northern provinces of Tangiers, Nador, and Tetuan, rounding up sub-Saharans and bussing them to cities in the interior and releasing them there.

The 2004 Family Code discriminates against women with regard to inheritance and procedures to obtain divorce. The code sets 18 as a minimum age of marriage but allows judges to marry children below this age in certain circumstances. They routinely do so.

A new law on violence against women, adopted on February 14, took effect six months later. It criminalizes some forms of domestic violence, establishes prevention measures, and provides new protections for survivors. But it does not set out duties of police, prosecutors, and investigative judges in domestic violence cases, or fund women’s shelters.

A 2016 law on domestic worker rights took effect on October 2. The law provides domestic workers with minimal labor protections from which they have long been excluded. It requires written labor contracts for domestic workers, sets 18 as the minimum age for such employment, after a five-year interim period during which 16 and 17-year-olds are allowed to work, limits weekly working hours, guarantees a weekly day off and paid vacation, and sets a minimum wage. It imposes fines on employers who violate the law, and prison sentences for some repeat offenders. While the law came into force, authorities have yet to ensure adequate implementing mechanisms to ensure that domestic workers can realize their rights.

Morocco’s penal code still discriminates against LGBT persons. Article 489 of the penal code stipulates prison terms of six months to three years for “lewd or unnatural acts with an individual of the same sex.”

In a challenge to Morocco’s efforts to win international recognition of its unilateral annexation of the Western Sahara, the European Court of Justice on February 27 ruled that a fishing agreement between Morocco and the European Union did not apply to the waters off the coast of Western Sahara, due to the separate and distinct status that the UN assigned to that territory.

Two new EU-Morocco agreements, crafted in response to the decision and alluding to “benefits to the population of Western Sahara and the consultation of this population,” are pending votes by the parliaments of the European Union and Morocco.