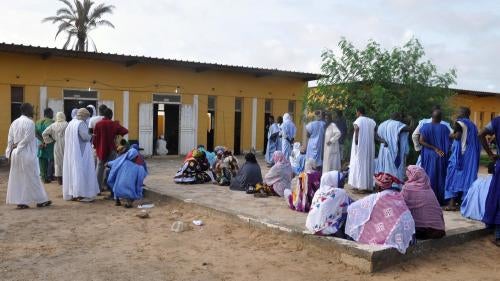 Mauritanian authorities restricted freedom of expression and assembly, especially when independent activists protested racism and ethnic discrimination, the persistence of slavery, and other sensitive issues. They imprisoned activists on dubious charges and refused to free blogger Mohamed Cheikh Ould Mkhaitir after he had completed his term for blasphemy. Opposition Senator Mohamed Ould Ghadda spent most of 2018 in pretrial detention on vague corruption charges.

Slavery has declined but has not been eliminated entirely.

In addition to social pressures, a variety of state policies and laws that criminalize adultery and morality offenses render women vulnerable to gender-based violence, making it difficult and risky for them to report sexual assault to the police.

Mauritania’s laws impose the death penalty for a range of offenses, including, under certain conditions, blasphemy, adultery, and homosexuality. A de facto moratorium remains in effect on capital punishment and on corporal punishments that are inspired by Islamic Sharia law and found in the penal code.

Local online news media provide a range of views and reportage, some of it virulently critical of President Mohamed Ould Abdel Aziz, who completes his second term in 2019 amid speculation that he may seek a constitutional amendment or other arrangement that will enable him to retain power. However, prosecutors use repressive legislation that includes criminal defamation and broad definitions of terrorism and “inciting racial hatred” to censor and prosecute critics for nonviolent speech.  A new anti-discrimination law adopted in 2017 added to the arsenal; article 10 states, “Whoever encourages an incendiary discourse against the official rite of the Islamic Republic of Mauritania shall be punished by one to five years in prison.”

In November 2017, an appeals court reduced the blasphemy sentence of blogger Mohamed Cheikh Ould Mkhaitir from death to two years in prison, deeming that he had “repented” sufficiently to qualify for the lighter sentence. Mkhaitir’s offense was an article in which he argued that his countrymen should not use the discrimination that the Prophet Muhammad was said to have practiced in his day to justify their own discrimination against vulnerable groups, including the M’alimin caste to which Mkhaitir belongs. Imprisoned since his arrest in January 2014, the appeals court should have released Mkhaitir upon reducing his sentence.

However, authorities have since detained him in an undisclosed location, despite his declining health and offers reportedly made by other countries to grant him political asylum. Mkhaitir was in “administrative detention for his own safety,” authorities told a United Nations committee on May 2, an apparent reference to street protests in which some Mauritanians have demanded his execution.

The National Assembly on April 27 voted to make the death penalty mandatory for anyone convicted of “blasphemous speech.” This toughened punishment seemed to be a response to the reduction of Mkhaitir’s sentence.

On August 7, authorities arrested Biram Dah Abeid, president of the Initiative for the Resurgence of the Abolitionist Movement (IRA), an anti-slavery association. The activist, who while jailed won a seat in the 2018 National Assembly elections, remained in pre-trial detention as of this writing, under investigation for reportedly insulting and threatening a journalist.

Activist Abdallahi Yali has been in jail since January 2017, facing a trial that opened October 29, 2018, on charges of incitement to violence and racial hatred under the penal code, counterterrorism law, and cybercrime law. The basis for the charges are WhatsApp messages in which Yali called on his fellow Haratines to resist discrimination and demand their rights. The Haratines, who are Arabic-speaking, dark-skinned descendants of slaves, are one of Mauritania’s largest ethnic groups.

The 1964 Law of Associations requires associations to obtain permission to operate legally and allows the Ministry of Interior to refuse such permission on vague grounds such as “anti-national propaganda” or exercising “an unwelcome influence on the minds of the people.” The ministry has withheld recognition from several associations that campaign on controversial issues, such as IRA and “Hands Off My Nationality,” which accuses the government of discriminating against blacks in the national civil registration process.

In July, IRA activists Abdallahi Saleck and Moussa Bilal Biram completed two-year prison terms. They were the last of 13 IRA members freed after conviction in an unfair trial for their purported role in violence that erupted when police tried to dismantle an informal settlement in Nouakchott in 2016. The appeals court had convicted Saleck and Biram of incitement to an unlawful gathering and administering an unrecognized association.

On July 22, Mauritanian authorities blocked the departure for Geneva of five activists who lead organizations of widows and orphans that demand accountability for the state-sponsored repression that targeted Afro-Mauritanians between 1989 and 1991 and oppose the amnesty that the government decreed for those events in 1993. Maimouna Alpha Sy, Aïssata Mamadou Anne, Aïssata Alassane, Diallo Yaya Sy, and Baba Traoré were to participate in the UN Committee Against Torture’s periodic review of Mauritania.

Human Rights Watch representatives entered and conducted research in Mauritania several times in 2018 without obstacles, but were unable to get government permission to hold a press conference in a Nouakchott hotel in February, holding it instead in the office of a local organization.

Early in 2017, Senator Mohamed Ould Ghadda helped to defeat a motion before the Senate supported by President Abdel Aziz to dissolve that body, which is the upper chamber of parliament. In response, the president called a referendum to abolish the chamber, which Ghadda also opposed. In August 2017, five days after voters approved the measure, authorities arrested Ghadda and charged him with taking bribes from Mohamed Bouamatou, an exiled financier and critic of the president. (A foundation created by Bouamatou, the Fondation pour l’Egalité des chances en Afrique, supports the work of Human Rights Watch.) In August 2018, authorities released Ghadda after he had spent one year in pretrial detention. Four months earlier, on April 25, the UN Working Group on Arbitrary Detention determined Ghadda’s detention to be arbitrary. The charges against him are pending.

Authorities have refused legal recognition to a political party, the Forces of Progress for Change, that is outspoken on racial discrimination. The party appealed the refusal to the Supreme Court in 2015 but has not received a decision since.

Mauritania abolished slavery in 1981 and criminalized it in 2007. The government claims that there is no longer any slavery, only its legacy, in the form of extreme poverty and exclusion, which it is addressing. The Global Slavery Index estimates that there are 90,000 slaves in Mauritania, or 2 percent of the population, including those who endure “modern” forms of the practice, such as forced or bonded labor.

Three special courts that prosecute slavery-related crimes have tried a handful of cases since their creation under a 2015 law. In March 2018, the special court in Nouadhibou reportedly sentenced a father and son to 20 years in prison and, in a separate case, a woman to 10 years in prison for enslaving others.

In 2017, parliament adopted a law on reproductive health that recognized it to be a universal right but that maintained the ban on abortion. It also adopted a general code on children’s protection, which criminalizes female genital mutilation.

In addition to societal pressure to keep silent, women who endure sexual violence confront institutional barriers that include police and judicial investigative procedures that are not gender-responsive. Mauritanian law does not adequately define the crime of rape and other forms of sexual assault, although a draft law on gender-based violence with more specific definitions was pending before parliament.  The criminalization of consensual adult sexual relations outside marriage likely deters girls and women from reporting assaults, because they can find themselves charged if the judiciary views the sexual act in question as consensual. During 2018, there were women in prison for adultery who said they had in fact been raped.

Mauritania continued to implement a biometric national civil registration process for all citizens and others present in the country. Many citizens, particularly the poor or poorly educated, struggled to fulfill the arduous documentation requirements. Some had reportedly given up trying. Schools sometimes prevented unregistered children from enrolling, even though school is compulsory from ages 6 to 14. Even when education authorities allowed unregistered pupils to enroll, they prevented them from taking the national exams they must pass to continue their education, causing many to drop out of school.

Mauritania is a member of the G5 Sahel, an alliance of five countries that cooperate on security, including counterterrorism. The G5 is headquartered in Nouakchott. In his most significant official meeting during 2018 with a Western head of state, President Abdel Aziz received French President Emmanuel Macron on July 2 and 3 during a G5 summit. There was no public indication that the two had discussed human rights issues.

On November 3, the US notified Mauritania that as of January 2019, it would lose bilateral trade preference benefits under the African Growth and Opportunity Act (AGOA). The White House justified the decision stating, “Mauritania has made insufficient progress toward combating forced labor, in particular the scourge of hereditary slavery…. [and] continues to restrict the ability of civil society to work freely to address anti-slavery issues.” In 2017, the US exported to Mauritania goods valued at US$128 million and imported $62 million worth of goods.