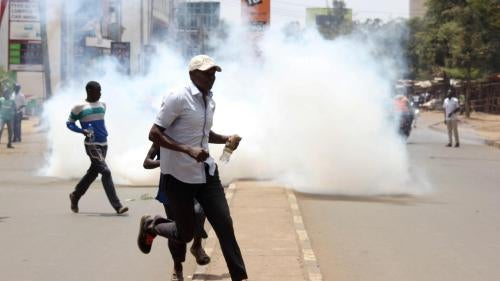 Lack of accountability for serious human rights violations, perpetrated largely by security forces, remains a major concern in 2018. The 2017 presidential election period saw abusive police operations in opposition strongholds, with police beating and shooting to death at least 100 opposition protesters and bystanders. Many women and girls were raped and sexually harassed by police during these operations.

A March 2018 peace deal between President Uhuru Kenyatta and main opposition leader, Raila Odinga, eased political tensions, but at time of writing, authorities had not taken any significant steps to ensure accountability for police brutality.

Kenyatta on numerous occasions publicly promised to respect freedom of expression and media. However, the working environment for journalists and activists remains hostile. In 2017 and early 2018, police threatened journalists and bloggers, arrested and detained journalists, and shut down at least three television stations.

Human Rights Watch research found that police and pro-government militia were responsible for the deaths of more than 100 opposition supporters in Nairobi and western Kenya during elections protests. Although these killings and other abuses have been well documented by human rights groups, Kenyan authorities have rarely investigated them.

In November 2017, the Independent Policing Oversight Authority (IPOA), a civilian police oversight institution, said it had investigated at least two cases relating to the 2017 elections, but could not identify the killers due to lack of evidence. IPOA recommended a public inquest for the killing of six-month-old Samantha Pendo in Kisumu, and compensations for the families of baby Pendo and nine-year-old Stephanie Moraa, who witnesses said was shot by police as she stood on the balcony of her home in Nairobi.

In July, the director of public prosecutions charged an administration police officer with the killing of a Meru University student, Evans Njoroge, following investigations by IPOA. The officer was awaiting trial at time of writing. Evans was shot on March 10, 2018, at close range at the back of his head during protests by Meru university students in eastern Kenya over poor management of the institution. Such investigations were few and far between, as authorities have overwhelmingly failed to investigate and prosecute cases of widespread police killings across the country.

In early 2018, investigations by Kenyan human rights organizations, found that Kenya Forest service officers used excessive force against members of the Sengwer, an indigenous community in the Rift Valley region. Authorities forcefully evicted them from Embobut forest in late 2017 in an effort to preserve the Mau water catchment area.

Despite public promises by President Kenyatta to safeguard press freedom, police and senior state officials attacked and threatened journalists writing on “sensitive issues” such as elections, corruption and security.

Around the 2017 elections, police and other government officials threatened and intimidated journalists and bloggers. In early 2018, the Communications Authority of Kenya switched off at least three television stations – KTN, NTV, Citizen and Inooro – for defying government order against covering Odinga’s mock swearing in ceremony on January 30.

On January 6, David Mugonyi, the spokesperson of Deputy President William Ruto, threatened to have a Daily Nation journalist, Justus Wanga, sacked for a story that exposed a rift between Kenyatta and Ruto over cabinet appointments.

On March 26, Kenyan media reported that anti-riot police physically attacked journalists, including Citizen TV’s Stephen Letoo and NTV cameraman, Robert Gichira, as they reported on the airport scuffle that ensued during deportation of opposition lawyer, Miguna Miguna. One of the police officers slapped, Sophia Wanuna of KTN News. Kenyatta’s director of digital communications, Dennis Itumbi, later that day tweeted to commend the police officers for “acting firm” at the airport.

On May 16, Kenyatta signed a new law on cybercrime that criminalized “false or fictitious” news and imposed hefty fines. Although the High court later struck down that provision as unconstitutional, other provisions introduce new offences and harsh penalties, thus stifling freedom of expression and media.

Threats to Activists and Political Opposition

Human rights organizations and activists critical of the government, especially those working on accountability, security forces abuses, and elections, continue to face threats and restrictions, including on freedom to assemble. Human Rights Watch found that between August 2017 and March 2018, police and other officials targeted at least 15 activists and victims of police brutality in Nairobi and the western county of Kisumu. They faced threats of arrest, warnings not to post information on the internet about police brutality during the elections period, home and office raids, and confiscation of laptops and other equipment.

In September, an activist who documented police brutality in Nyalenda, Kisumu said that police warned him by phone not to share photos and video clips of the violence and accused him of tarnishing their image. Police raided his office in October and ordered him to hand over photos and videos of police abuses during the election period.

On January 30, authorities designated the National Resistance Movement (NRM), an activist wing of Odinga’s NASA coalition, a criminal group. This step set the stage for a crackdown on politicians and lawyers who took part in Odinga’s oath ceremony, with arbitrary arrests and detentions and, in at least one case, deportation.

In February 2018, the authorities stripped opposition lawyer, Miguna Miguna, of Kenyan citizenship and forcefully deported him to Canada despite numerous court orders to restore Miguna’s citizenship and rescind the decision to deport him. The authorities arrested and charged other opposition politicians Tom Kajwang, Babu Owino and George Aladwa with participating in an illegal assembly and further revoked passports for over 100 opposition legislators.

The government continues to ignore civil society appeals to implement the Public Benefits Organizations (PBO) Act, 2013, signed into law by then-President Mwai Kibaki in February 2013 to streamline the regulation of the NGO sector and enhance accountability. Instead, the Kenyatta administration twice attempted to introduce amendments to the law restricting the work of NGOs that receive more than 15 percent of their funding from foreign sources. The first amendments were rejected by parliament in December 2014 and the second were shelved in the lead up to the 2017 elections, but there remains the possibility of the authorities reintroducing the amendments.

Lack of Accountability for Rape and Sexual Violence

Human Rights Watch documented rape and sexual harassment during police operations in western Kenya and Nairobi during the elections period.

Most women said they were raped by policemen or men in uniform, many of whom carried guns, batons, teargas canisters, whips and wore anti-riot gear. In at least one case, a girl died after being raped. A 27-year-old woman, interviewed, who had given birth on August 27 was raped four days later. Many women and girls said they suffered incapacitating physical injury or experienced other health consequences.

Although both Kenya Police Service and IPOA, had promised to investigate these cases, there has been little progress in holding the perpetrators to account. Many survivors did not receive post-rape medical care or counselling support.

Threats to Livelihoods and Lake Turkana

Kenya punishes consensual same-sex relations with up to 14 years in prison. A constitutional challenge to the ban remains pending before the High Court. In October, a court ordered the seven-day suspension of a ban that the Kenya Film Classification Board had slapped on “Rafiki,” a love story about two young women whose fathers are political opponents.

Kenya continues to play a major role in east Africa and has maintained close political and economic ties with the United States, China and European nations.

While there are no pending International Criminal Court (ICC) cases concerning alleged crimes against humanity committed during the 2007-2008 post-election violence in Kenya, the government has yet to surrender three persons wanted by the ICC on allegations of witness tampering.

As in 2007, the contested presidential elections in August 2017 attracted global concern. In January 2018, the UN secretary general Antonio Guterres dispatched former Nigeria president, Olusegun Obasanjo, to meet Kenyatta and Odinga, in a bid to de-escalate the political tension. On March 9, Kenyatta and Odinga agreed to work together to ease the tension.

Between October and March 2018, the US ambassador to Kenya Robert Godec, and other heads of missions in Kenya, publicly urged both the ruling Jubilee party and Odinga’s NASA alliance to take measures to end the violence and political tension following the disputed presidential election.

Civil society groups criticized diplomats for siding with the ruling party by urging the opposition to concede defeat and end protests, and for failing to condemn what they described as the manipulation of the electoral process in favor of Kenyatta.